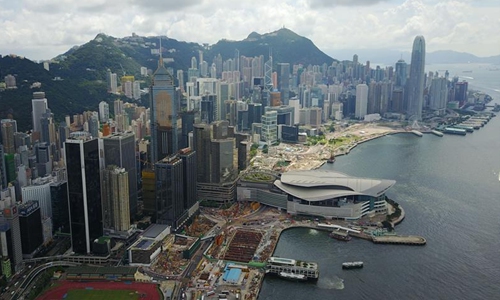 An aerial view of Hong Kong. (Photo: Xinhua)
Hong Kong's economy fell 8.9 percent in real terms in the first quarter from the year be-fore, the most significant drop since the first quarter of 1974. That's when the quarterly numbers became available, according to official estimates on Monday, illustrating the economic shock of the COVID-19 outbreak that has pushed the local economy deeper in the red.

Monday's data, a drop from a 3 percent decline in the previous quarter, suggests that the city's economy would log a year-on-year contraction for the third consecutive quarter, af-ter entering negative territory in the third quarter of 2019 amid the China-US trade war and social unrest.

The pandemic caused severe disruption to wide-ranging economic activities and supply chains in the region, according to a government statement on Monday.

The local economy is expected to gradually bottom out in the second half of the year if the pandemic is contained, Chan told a press briefing shortly after the announcement of the first-quarter readings on Monday afternoon.

He called for concerted efforts to revive the economy, especially on the part of private consumption.

"Many locals remain pessimistic about the outlook for the city's economy soon," owner of a mini grocery store in Hong Kong who gave his surname as Lee, told the Global Times on Monday.

The Hong Kong Special Administrative Region government's bailout measures, including an HK$10,000 ($1,289.65) cash handout per annum for adult permanent residents, could surely offer much-needed help for many grassroots families. Still, they have yet to be compelling in reviving the local economy, Lee said, revealing his business irked out about 10-20 percent of pre-virus revenues.

He longed for travel between the mainland and Hong Kong to return to normal to offer "some hope for a revival [of the city's economy]."

In a statement sent to the Global Times, the Hong Kong Association of Banks said its member banks have been encouraged to play an active role in financial relief efforts and will "introduce timely measures to help customers ride out the current challenges."

The association announced in late April an extension of the scope of the principal mora-torium for bank mortgage loans to cover subsidized sale flats under the local housing au-thority.