BUSINESS HK's future as bridge between mainland, West will get stronger

HK's future as bridge between mainland, West will get stronger 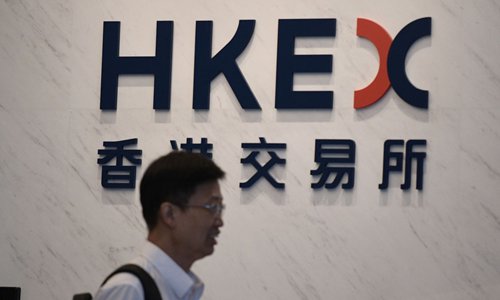 Pedestrians pass by the office of HKEX in Hong Kong. (Photo: VCG)

The Hong Kong Special Administrative Region's (HKSAR) future role as an international financial hub is still promising, thanks to the central government's internationalization efforts and the city's important position as a bridge between China and the West, industry analysts said on Tuesday.

Their comments came after Executive Director of the Stock Exchange of Hong Kong (HKEX) Li Xiaojia issued his report for Hong Kong's development in 2020 on Monday, in which he said that the world needs more and better connections and Hong Kong's role as the connector between East and West will only become more vital.

The report, titled the Clear Vision for a New Decade, was released on the official website of the HKEX on Monday. It noted that there are gaps between China's market structures and regulatory models and those of the West, which validates, reinforces and strengthens Hong Kong's fundamental role of enabling more seamless interaction between the mainland and the rest of the world in the coming decade.

"Taking full advantage of the 'One Country, Two Systems' principle, the Hong Kong market has acted as a bridge between the Chinese mainland and the West, creating important strategic value for the city and winning sustained prosperity and wealth accumulation for itself," Li said.

Li said that the HKEX will focus on the power of technology as a new driving force to connect the mainland more quickly and effectively with the world.

Hong Tao, director of the Institute of Business Economics at Beijing Technology and Business University, told the Global Times on Tuesday that the HKSAR is also helpful to the mainland in attracting foreign investment.

With the listing of Alibaba in Hong Kong in November, more US-listed Chinese tech companies are likely to shift to Hong Kong in 2020, Hong said.

Alibaba's secondary listing in Hong Kong in November 2019 raised about HK$101.2 billion ($12.9 billion), accounting for about 32 percent of the total raised in the Hong Kong IPO market, data released by PricewaterhouseCoopers on Thursday.

Zhao Xijun, vice president of the School of Finance of Renmin University of China, told the Global Times on Tuesday that it is also more convenient for domestic financial institutions to go abroad from Hong Kong than from Shanghai or Shenzhen because Hong Kong has a relatively mature financial market and complete legal environment that's in line with international rules, Zhao said.

Nevertheless, Zhao noted that Hong Kong needs to ensure social stability in its society first and foremost, or some of its functions will soon be overtaken by Singapore or other countries and cities.