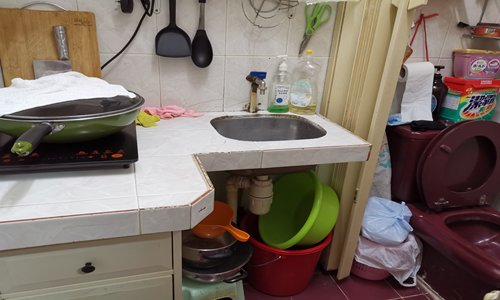 The bathroom/kitchen of an tiny apartment in a "Tong Lau" in the Kowloon area in Hong Kong on September 2. (Photo: Global Times)

New World Development, one of the Hong Kong's big four property conglomerates, announced it will donate 3 million square feet (270,000 sq m) of farmland - nearly one-fifth of its farmland holdings - to build new homes amid Hong Kong's housing crisis which has been partially blamed for the violent protests of recent months.

Cheng said that part of the donation will be used to build roughly 100 apartments around Tin Shui Wai MTR station, aiming to assist low-income families with children. The project is to be completed in 2022, according to a statement the company sent to the Global Times via email on Thursday.

Those four companies have been under the spotlight amid the ongoing social unrest, as they were accused by the public of driving up home prices, an issue that has fueled the violent protests in the city.

Hung said that he hoped it will encourage other developers and Hong Kong enterprises to show social responsibility to Hong Kong's future development and care for the city's young people.

Earlier this month, Raymond Kwok, chairman of another Hong Kong housing giant, Sun Hung Kai Properties, said he understood that there was a great shortage of affordable housing in Hong Kong and he would like to accelerate housing construction projects.