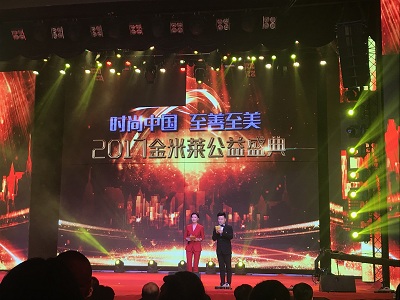 Beijing (People’s Daily) – A charity gala sponsored by Hong Kong watch brand Jmlai kicked off in Beijing on Friday. The show concluded its charitable contributions for 2017 and was supported by the China Charity Federation and Hong Kong Public Charity Federation.

Inspiring songs about hope and cooperation were performed by Jmlai CEO Lin Jianheng and other singers followed by a poetry recitation "Time." A lucky draw at the end of the show brought the evening to a climax as dozens of expensive watches were presented to the winners.

Founded in 1979 Jmlai is an upscale watch maker focusing on the combining traditional and modern techniques. Its unique design is inspired by philosophy and Buddhism. Its excellent craftsmanship has attracted foreign designer brands into cooperation including Citizen, Jaeger LeCoultre, Fossil and Armani, with sales spreading to the US, Japan, Europe and South Asia.

Jmlai has been appointed the designated watch brand for Miss Tourism International and the China Charity Federation’s Spring Festival Gala. In the spirit of the 19th National Congress of the Communist Party of China, Jmlai takes its corporate social responsibility seriously: Sending emergency relief to disaster areas during the Wenchuan earthquake, building over 130 public libraries and donating 490,000 books to primary school students.