A golden era of high profits for Chinese hog farmers will last one year or more despite climbing pork production as the country gradually emerges from the influence of African swine fever (ASF), farmers and experts told the Global Times. 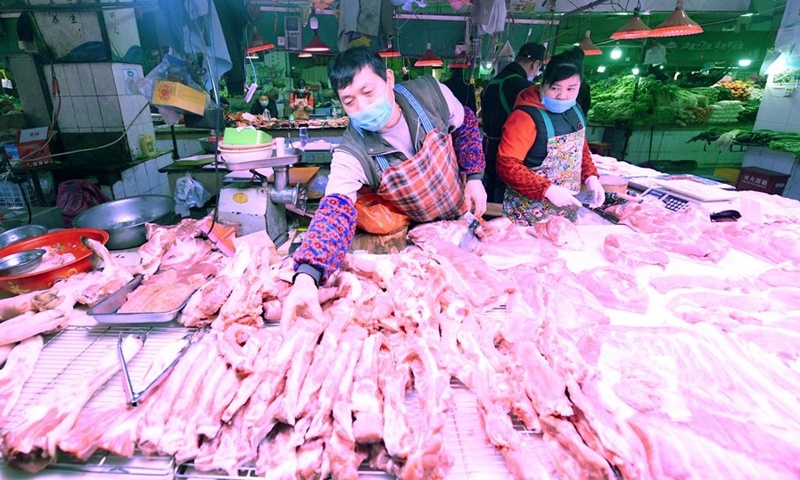 Soaring domestic pork prices since mid-2018, primarily as a result of the impact of ASF, have pushed profitability higher for hog breeders. There are rumors on some social networks that the profit from raising one hog equals that of two bottles of Moutai, the most expensive liquor in China.

"That's an exaggeration. A hog's profit is lower than even one bottle of Moutai, but it's true that the industry's profitability is at a record high in China nowadays," Li Yunlong, a hog farmer from North China's Hebei Province, told the Global Times on Tuesday.

In recent weeks, however, prices have become more volatile. Pork prices started to correct in September and dropped by about 15 percent over the next two months. But prices started to rise again at the end of November, though by a relatively limited range.

Meanwhile, the supply of hogs is also climbing steadily as large farms ramp up production. According to China Central Television, the number of live hogs surged in each of this year's first nine months, rising to 387 million as of the end of September and pushing production capacity to about 88 percent of the level at the end of 2017.

Rising supply and volatile prices have prompted market speculation as to whether the industry's good times will end soon. However, hog farmers and analysts who talked to the Global Times said they had no such worries.

Li said that recent price fluctuations reflected temporary situations, such as the government's release of frozen pork into the market, bans on hog transportation in certain provinces, and a decrease in imported meat as a result of the coronavirus epidemic.

"Prices will remain relatively high in the first half of next year, but they might correct a bit as hog production is ramped up by large corporations. In general, the bonus period for hog-raising will last at least another year," he said.

Wang Gangyi, a professor at the Northeast Agricultural University, said that pork prices will continue to surge until April, when the effects of Chinese hog-raising giants' production expansion will show up. Although prices might then correct, the industry will maintain prosperity over the long run.

"As the government wants to restore industry confidence after the ASF hit and has rolled out various support policies, such as subsidies for private breeders, China's pork price and supply are unlikely to decrease drastically," he said.

He said that many domestic hog breeders have spent their recent profits on rising feed costs and environmental protection facilities. "The bonus period, if there's one, will last for a very long time for sincere players," he told the Global Times.

Pan Chenjun, senior analyst at Rabobank, also predicted that the demand and supply of pork will remain at high levels next year, with upper stream hog farms continuing to register decent profits and investment continuing to go up.

"While pork prices are expected to decline in 2021, they will remain at a high level. But relatively flat prices will mean pork prices will be less of a factor contributing to inflation in 2021," Pan told the Global Times on Tuesday.

China's imports of pork have also headed down recently as regulators tightened scrutiny on imported frozen meat after the discovery of coronavirus on some outer packaging, but experts said the move has had a limited impact on China's hog-raising industry, as imported frozen pork, mostly from Spain and Germany, only accounts for a tiny proportion of China's overall pork consumption.