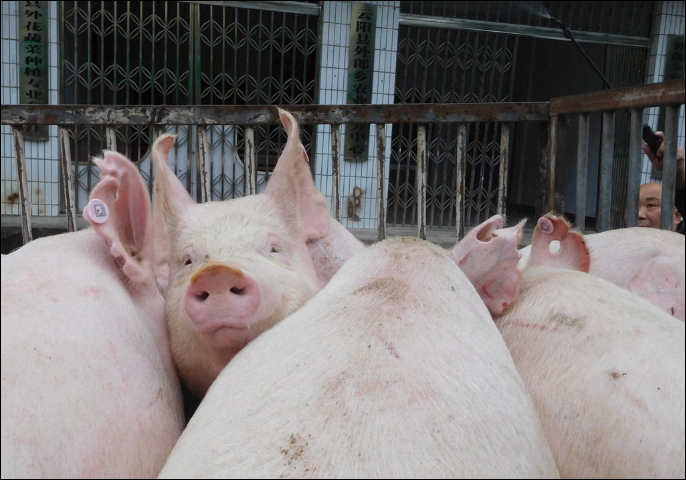 China will intensify efforts to make its hog farming sector safer and ensure stable supplies after the industry has been seriously affected by African swine fever outbreaks, the Ministry of Agriculture and Rural Affairs said on Thursday.

"We will place equal importance on disease prevention and control and on pork output to stabilize hog production and try to guarantee market supplies," Vice-Minister of Agriculture and Rural Affairs Yu Kangzhen said at a news conference organized by the State Council Information Office.

Yu was elaborating on a guideline released by the State Council on Wednesday regarding intensifying prevention and control of African swine fever.

Outbreaks of the fever have been effectively contained in China in recent months following strict controls and prevention efforts taken since early August after the first domestic outbreak of the disease was reported. But the country still faces severe challenges in the disease's prevention and control, and sustained efforts are needed, he said.

Yang Zhenhai, chief of the ministry's Animal Husbandry and Veterinary Medicine Bureau, said monitoring has shown the number of live hogs in China fell by nearly 23 percent year-on-year in May due to the outbreaks.

The ministry will work with related authorities to urge local governments to implement policies and measures designed to support hog raising, including offering preferable loans to hog farmers and cash subsidies to those whose animals were slaughtered due to swine fever prevention and control measures, he said.

The authorities will encourage hog farmers to replenish stock and organize technicians to help them solve problems in hog raising. Meanwhile, the ministry will guide local authorities to help hog farms improve waste treatment facilities, and prevent them from closing farms at will, he said.

The ministry will also support cross-regional transport of pork to replace transport of live pigs－which is still common practice in many places－to reduce the chance of the spread of disease, Yang said.

As of Wednesday, Yu said, 143 swine fever outbreaks had been reported in China, 44 of them this year. To prevent it spreading, nearly 1.2 million hogs were slaughtered. Quarantine measures have been lifted in 25 provincial areas, he added.

"In general, the frequency of swine fever outbreaks has noticeably decreased, and hog production, transport and distribution are gradually being restored," Yu said.

Zhu Zengyong, a researcher at the Chinese Academy of Agricultural Sciences, said that with sharp declines in the supply of pork in China, domestic pork consumption has declined since the second half of last year.

Zhu predicted a further decline in production and consumption this year, and a gap of 5 to 10 percent between supply and demand.

"As an alternative to pork, poultry will see a noticeable increase in supply in the next two years, which will ease shortages in pork supplies," he said.

Pork accounts for more than 60 percent of meat production in China, said Xin Guochang, an information monitoring official at the ministry.

Authorities have been adapting swine fever controls and prevention measures since late last year to effectively contain the infectious disease, which has a high mortality rate for pigs but is not transmittable to humans, Xin said at the Global Pig Industry Conference hosted by the Chinese Academy of Agricultural Sciences in Beijing on Thursday.

For example, all hogs within 3 kilometers of farms where swine fever had been verified used to be slaughtered for disease prevention and control. Now, more sophisticated calculations are made to determine the area targeted for slaughter so that farmers without infected animals are more easily able to maintain production, he said.

The government has been transparent in disclosing information about swine fever outbreaks, Xin said. "But it cannot be entirely ruled out that some pig farmers failed to report outbreaks to authorities, according to regulations, for various reasons," he added.

Li Shuilong, president of the China Meat Association, said that although African swine fever has caused serious damage to the country's pork sector, it has also provided a good opportunity for the domestic industry to upgrade operations and address problems such as poor sanitation conditions and overuse of vaccines and drugs.