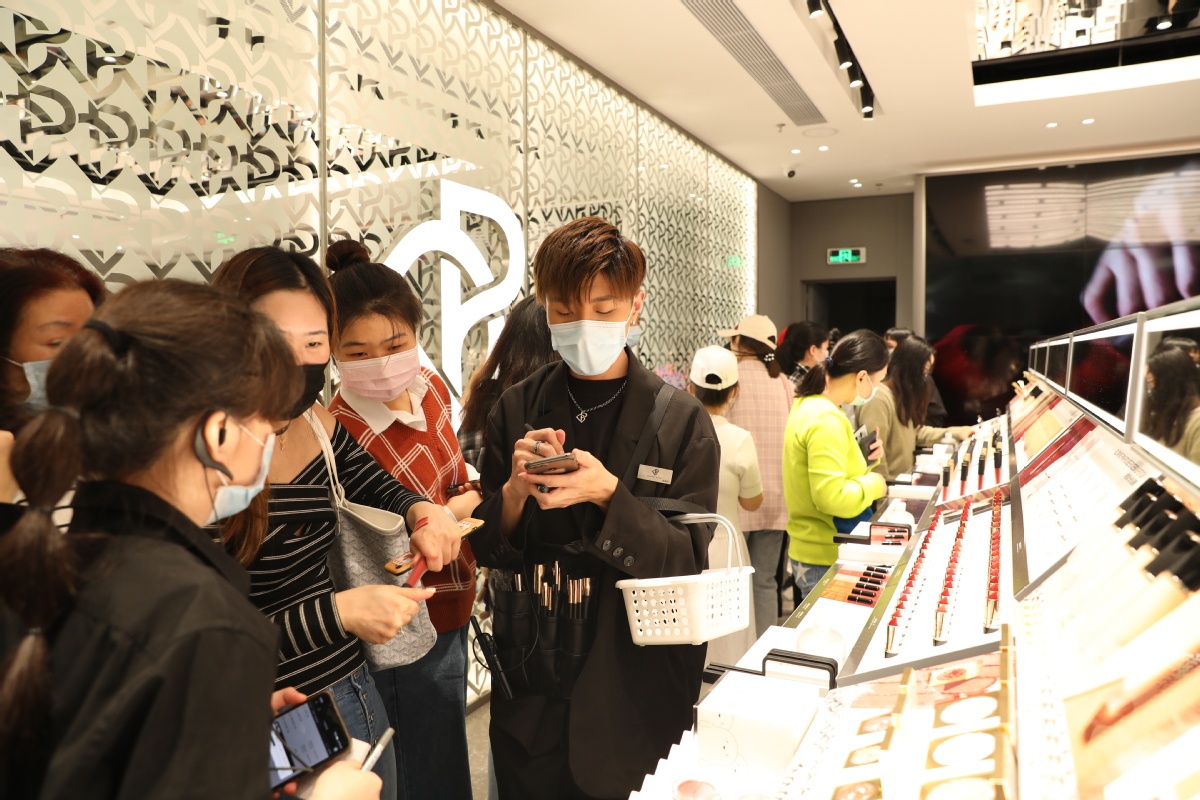 For Su Qingzi, a big fan of cosmetics, the changing market conditions in China's makeup sector over the past two to three years have been startling.

Back in 2016, when Su was 23 and was studying for her master's degree in Beijing, the makeup she used was mainly from the United States, Europe, Japan and South Korea. She hardly heard of any Chinese makeup brands at the time.

However, looking around her dressing table today, eye shadow palettes and lipsticks of domestic brands take up the most space and foreign brands are nowhere to be seen.

"I can't express enough how much I love these domestic makeup products. These eye shadow palettes produced by Perfect Diary are from the collaboration series between Perfect Diary and the Discovery Channel.

"Inspired by natural colors in the wild, each eye shadow palette is based on a color scheme and named after an animal. For example, the koi fish palette uses sparkling colors as the main theme, while the red-crowned crane palette mainly adopts reddish-brown. Apart from the beautiful packaging, the eye shadow palette itself is very practical. I have already decided to complete the collection," Su said.

According to China Insights Consultancy, in the first three quarters of 2020, revenue of Yatsen E-commerce grew by 70.2 percent year-on-year to 3.8 billion yuan ($585.2 million). The growth rate was 15.6 times that of China's cosmetics market during the same period.

Meanwhile, during the first three quarters of 2019 and 2020, Perfect Diary was the only makeup brand that had gross merchandise volume on T-mall surpass 100 million yuan each month, said CIC.

Data from the company showed that as of August 2020, the number of fans of Perfect Diary's entire network had exceeded 27 million.

"From the message-sharing on Xiaohongshu, we found that those born after 1990 are confident about our national culture, which contributed to their fondness for homegrown brands. They also tend to try new things. This is part of the reason for the rise of domestic cosmetics brands.

"Meanwhile, the brands take full advantage of dividends brought by rising content platforms, which young consumers are increasingly dependent on. A survey showed that 75 percent of consumers make shopping decisions based on social media platforms. Using the platforms, domestic cosmetic brands can reach consumers with higher traffic and lower costs," said an official from Xiaohongshu.

Apart from trendy marketing strategies, industry experts said domestic makeup brands have made a lot of effort at image-building.

"Those born after 1995 represent the main purchasing power of China's cosmetics market. They are picky, and care about brand image. Their needs serve as a main driving force to encourage us to improve product quality and enhance brand image," said Huang Jinfeng, founder and CEO of Yatsen E-commerce, during an earlier media conference.

To better build brand image, on March 5, Perfect Diary launched its red-crowned crane eye shadow palette under its Discovery series. Through launching the palette, the company aims to appeal to society to protect the wintering habitat of the endangered birds in Yancheng, Jiangsu province.

It also became the official partner of the Chinese gymnastics team. By offering its new product－Rouge Intensive Velvet Slim Lipstick－to Chinese female gymnasts, the company tries to encourage females to remain confident at all times.

Other domestic cosmetics brands have also placed a lot of effort into image-building. For example, by launching carved lipsticks and archaic make-up boxes, Hangzhou, Zhejiang province-based Florasis aims to take advantage of traditional Chinese culture to attract consumers. Zeesea, also based in Hangzhou, cooperated with the British Museum and launched a co-branded series of eye shadow palettes.

"Homegrown brands are good at telling stories. For consumers from the new generation, the idea is trendy and conforms to their needs and consumption psychology. In the process, corporate brand images are enhanced," Huang said.

"The positioning and intrinsic spiritual value of the brand is core, helping the brand to win the hearts of consumers rather than merely stimulating impulse purchases. Besides, offline channel exploration is a breakthrough point for cosmetic companies. In this case, selling in brick-and-mortar makeup stores might be a good option," Wu said.