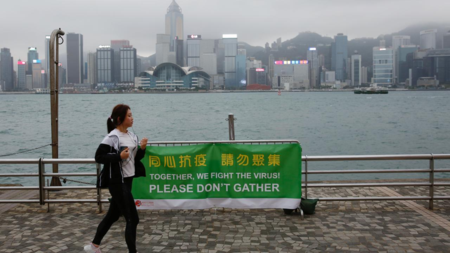 Hong Kong's economy shrunk nine percent in the second quarter of the year, the government said Wednesday, as the financial hub reels from the fallout of the coronavirus pandemic.

Advance estimates showed the April-June contraction was just shy of the record-breaking 9.1 percent plunge the city experienced in the first quarter and worse than the 8.3 percent forecast in a Bloomberg News survey. The figure also marks a fourth straight contraction and plunges the city deeper into recession.

"Locally, the recent surge in COVID-19 cases has clouded the near-term outlook for domestic economic activity," the government said in the release. "Nonetheless, once the local epidemic is contained again and external environment continues to improve, the Hong Kong economy hopefully will gradually recover in the rest of the year."

The city's unemployment rate has soared to its highest level in 15 years, with thousands unemployed and the urban poor being more vulnerable. According to data released on Thursday, it is tipped by Bloomberg that the territory's retail sales in June may again experience a double-digit decline.

But according to the government, on a quarter-to-quarter seasonally adjusted basis, the economy shrank just 0.1 percent, as compared to a revised 5.5 percent contraction in the three months to June.

The government said that the overall economic situation during the quarter has stabilized, especially in May and June, when the virus was basically under control.

The government report shows that the revised second-quarter data and the latest forecast of GDP growth in 2020 will be released on August 14.