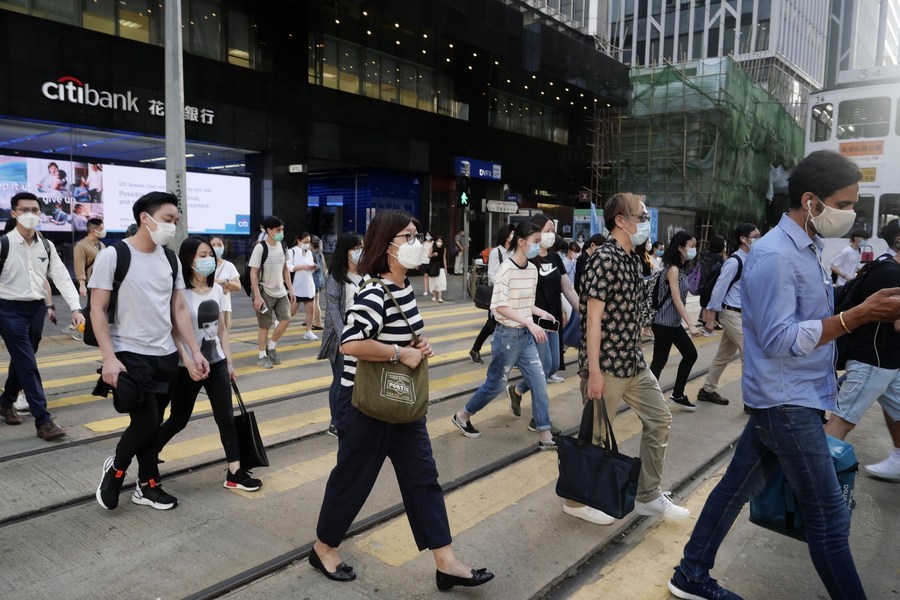 HONG KONG - Hong Kong on Friday revised down the official forecast on the gross domestic product (GDP) for this year weighed on by the COVID-19 outbreak, but pledged more efforts to help the economy bounce back after the epidemic is brought under control.

Andrew Au, an economist of the government of China's Hong Kong Special Administrative Region (HKSAR), predicted the GDP would drop 6 percent to 8 percent year-on-year in 2020 as the economic outlook is still highly uncertain.

The projection worsened from the previous estimate announced by the HKSAR government at the end of April that the economy would contract by 4 percent to 7 percent this year.

Au said the latest forecast takes into account the actual economic activities in the first half of the year, and the difficult and uncertain economic environment in the second half, as well as the cushioning effects of the government's massive relief measures.

"If the current wave of local infection can be contained within a short time and barring any further sharp deterioration in the external environment, economic performance for 2020 as a whole can hopefully fall within the upper half of the range forecast," Au said.

Hong Kong's GDP slumped 9 percent year-on-year in the second quarter of this year, falling short of market expectations and only slightly improving from a record 9.1-percent drop in the first quarter.

Analysts pointed out that the epidemic dampened business activities and the impact of social unrest lingered.

Hong Kong's Center for Health Protection reported 48 new confirmed cases of COVID-19 on Friday, bringing the total confirmed cases to 4,360. A large proportion of the cases were reported in the third wave of the epidemic since early July.

Smaller economic indicators appeared to be more alarming. Fixed capital formation slipped at a sharper pace to 21.4 percent year-on-year in the second quarter, and private consumption slumped 14.2 percent, the largest decline of all time. The jobless rate remained at the over-15-year high of 6.2 percent during the April-June quarter.

Financial Secretary of the HKSAR government Paul Chan said earlier this month that the economy is likely to face greater pressures in the third quarter and more time is needed than expected for recovery.

The government will continue to closely monitor the situation and roll out measures as necessary to maintain the vitality of the economy and pave the way for a speedy recovery once the threat of the epidemic recedes, Au said.

While the government relief can only help businesses keep afloat for a longer time, it is the epidemic developments that can truly decide when the economy can start to pick up. Only when the coronavirus spread is contained, Hong Kong's economic activities can be resumed.

Although Hong Kong's economic ties with foreign countries are still unlikely to recover amid the pandemic, the enormous consumer market and financial demands of the mainland, where life has largely returned normal, will offer a great opportunity for the Hong Kong economy to revive, Chan said.

Taking advantage of the Guangdong-Hong Kong-Macao Greater Bay Area development, Hong Kong can hopefully revive and people's livelihood can also improve after the epidemic is over, Chan said.