Hong Kong rioters' appeal to boycott shopping on Alibaba's e-commerce platform Taobao during the upcoming Double 11 shopping festival, which falls on November 11 each year, is ridiculous and unrealistic, analysts said. 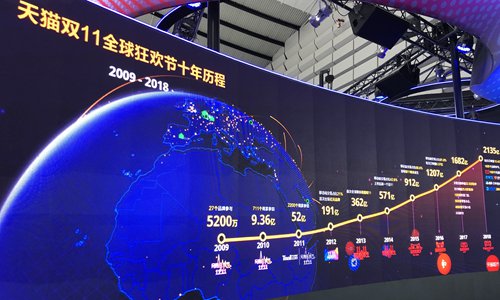 Some radical Hong Kong protesters recently posted on local social media platforms that no orders should be placed on e-commerce platforms located in the Chinese mainland on November 11. Since that didn't seem feasible, the protestors thought out new tricks: Orders can be placed after the festival to make sure they do not contribute to the sales volume on that day.

The appeal has actually drawn mixed opinions among the protestors themselves. "Hongkongers cannot stop buying on Taobao. My colleague  bought a lot of things on Taobao while saying it should be boycotted," a protester with the nickname Lidaoannengjiu posted.

In August, when riots in Hong Kong escalated and heavily damaged the city's social and economic order, retailers in the mainland stopped delivering equipment used by Hong Kong protesters, including masks, helmets and laser pens.

"It is very ridiculous to boycott the shopping festival, which goes against mainstream consumption passion," said Liu Dingding, a Beijing-based industry analyst.

Mainland netizens also expressed their discontent. "It is purely making conflict. Hongkongers have the right to govern Hong Kong but not to bring chaos to it," said a netizen named Haojilin.

Liu told the Global Times on Wednesday that online sales in Hong Kong would also be affected due to the unrest, which has hit the region's retail industry.

Official data showed retail sales in Hong Kong slumped 23 percent in August on a yearly basis and fell 6 percent from January to August.

Hong Kong ranked No.1 as the destination in terms of merchandise volume during last year's shopping spree, ahead of the US, according to information provided by Alibaba.

There were usually huge posters related to the shopping festival in Hong Kong each year, with content focused on teaching buyers how to save money or avoid express fees. Many physical stores would also join the event by rolling out sales promotions, media reports said.

In 2018, Alibaba set a record for the Double 11 shopping festival, hitting 10 billion yuan ($1.44 billion) in sales in 2 minutes and 5 seconds after the annual shopping spree began.