A sharp decline in consumption in China has contributed to reducing imports of shark fin by over 50 percent at the world’s largest shark fin trading hub – Hong Kong, a new study suggests.

The data shows the first major drop in imports occurred in 2011 to 2013. Another significant decline in the fin trade was reported in the second half year of 2017.

Animal rights groups have been appealing to airlines and cargo companies to stop transporting shark fins. About 22 shipping companies and over a dozen airlines including Thai Cargo, Singapore Airlines Cargo and China Airlines have banned shark fin cargo. In recent months, campaigners have also been urging FedEx to adopt a similar ban.

In China, shark fin soup has been regarded as a delicacy, with bowls of the stuff known to sell for more than 1,800 yuan (284 US dollars). But an anti-corruption campaign took a big bite out of demand. According to Ministry of Commerce data released in 2013, shark fin soup was off the menu for extravagant banquets, reducing consumption by more than 70 percent. Awareness drives and star-studded campaigns featuring Jackie Chan, Yao Ming, Sir Richard Branson and David Beckham further helped in reducing shark fin consumption.

While airlines have been the focus of campaigners’ efforts, there is evidence that shipping of shark fin has also been hit. The proportion of volume imported to Hong Kong by sea decreased from 90 percent in 2016 to 86 percent in 2017 – or from 5,197 tons to 4,275 tons.

A declining market for shark fin in China will also have contributed to reduced re-exports from Hong Kong, WWF maintained. Another report based on government data released by WildAid last month revealed shark fin soup consumption had dropped in China by more than 80 percent.

“We are now working towards making Hong Kong a shark fin free zone in the next decade or less,” Tsang added. 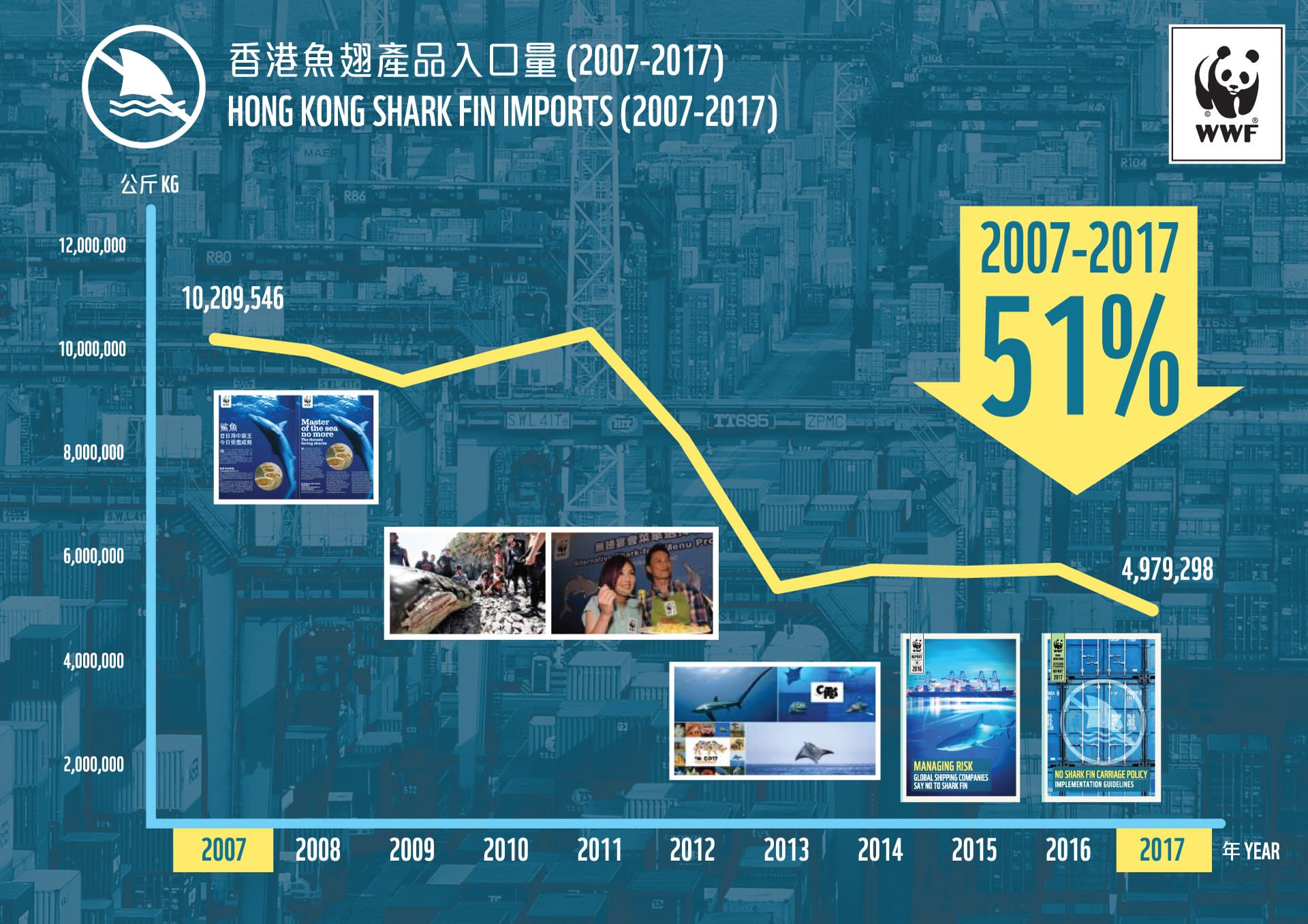 According to TRAFFIC, a wildlife monitor, more than 70 million sharks are killed every year around the world, with many species caught at unsustainable levels. Nearly 25 percent of sharks and rays are facing the threat of extinction, with overfishing for fins and meat the major drivers.

“Accounting for about 40 percent of shark fin trade every year, Hong Kong has a unique and critical role to play in conserving sharks globally,” said Dr. Andy Cornish, leader of WWF’s global shark and ray initiative

“Hong Kong is the world’s largest trader of shark fin, so a 50 percent drop in imports will have been felt by shark traders around the globe, and should result in less pressure on shark populations,” according to Cornish.

Meanwhile, WildAid has started a campaign explaining to consumers the harmful effects for their health of eating shark meat and fins.

“Sharks accumulate the highest concentrations of toxic substances such as mercury, methylmercury, cadmium and arsenic, long-term exposure to which can cause cancer, skin lesions, cardiovascular disease and neurological impacts in humans,” WildAid claimed.