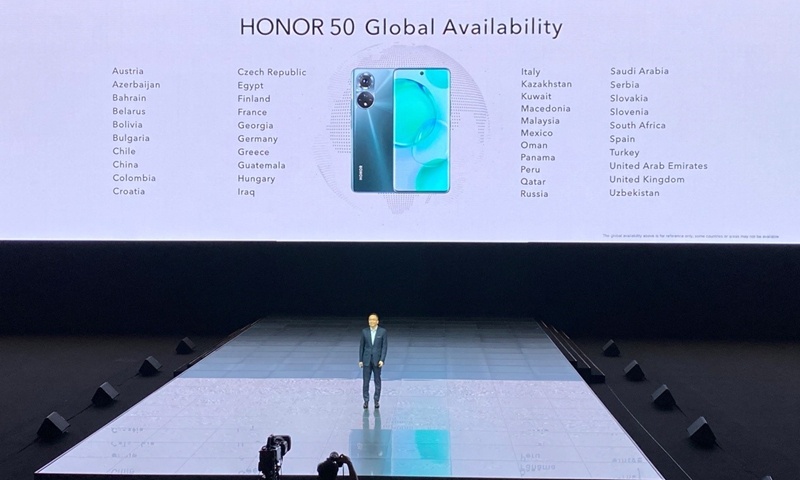 Launch event of the Honor 50 series in Shanghai on Wednesday (Photo: Global Times)

Honor, the smartphone brand sold by Huawei after the US imposed a chip ban last year, officially launched its 50 series on Wednesday. The premium smartphone line is also its first phone series powered by Qualcomm's new Snapdragon 778G 5G chip.

Featuring a fashionable design and powerful camera capabilities, the Honor 50 series caters to the needs of young people. Recognizing the trend of shooting and sharing content on the go, the Honor 50 series also takes a leap forward in videography, offering users a one-stop vlogging experience.

Over 1.1 million online reservations for the new handset were made on domestic e-commerce sites JD.com and Honor Mall as of Tuesday.

The company's CEO, Zhao Ming, said during the launch event on Wednesday that Honor's share of the domestic market dropped from 16.7 percent to 3 percent in the "darkest moment" but has now recovered to 9.5 percent.

"Now the darkest moment is over," Zhao said. Media reports said Honor's goal this year is to recover the previous market share level of at least 16 percent.

According to a report by global industry analysis firm, Counterpoint, in the first quarter of 2021, Vivo and Oppo topped the domestic smartphone market with a share of 24 and 23 percent respectively. Huawei and Xiaomi both ranked third with a market share of 15 percent, followed by Apple with a 13 percent share.

The 16 percent goal means Honor aims to surpass Apple and Xiaomi and take the place of former parent company Huawei.

First available in China, Honor 50 will also be coming to international markets in the future, the firm said. Industry insiders forecast that the company could possibly grab Huawei's lost ground in the overseas market once "everything is back in place."

Huawei officially announced the divestment of the smartphone brand in November 2020 to ensure its survival amid the US chip ban. Zhao said it has received R&D teams from South China's Shenzhen, Beijing and Northwest China's Xi'an, and has inherited the "highest quality assets of the Huawei system," including the most advanced technology and design.

Honor has resumed cooperation with all suppliers, including Qualcomm, Micron, MediaTek, Samsung, Microsoft and Intel, the company confirmed with the Global Times in January. It has also recently denied media reports saying it had not received authorization from Google's Android.

Huawei, on the other hand, is still struggling with the chip shortage. According to news site LatePost, Huawei will not release new Mate 50 series mobile phones, which should have its self-developed chips, to compete with the iPhone 13 this year. This is also the first time Huawei has halted the annual launch of the Mate series since it was launched in 2013.

The report says maintaining existing users would be Huawei's core strategy for its current smartphone businesses. Specific measures include low-cost replacement of batteries, back covers, and even components such as screens, motherboards and cameras for the old series, along with the launch of the HarmonyOS.

When reached by the Global Times about the report by LatePost on Wednesday, Huawei declined to make any comments on the matter.

Honor is also the only smartphone brand that has been officially included in the upgrade list of Huawei's HarmonyOS, as it was previously part of Huawei's consumer group.

When asked by reporters during a press conference on Wednesday whether the company will use the HarmonyOS in the future, Honor said that it currently uses the AndroidOS but will follow the development of the HarmonyOS.