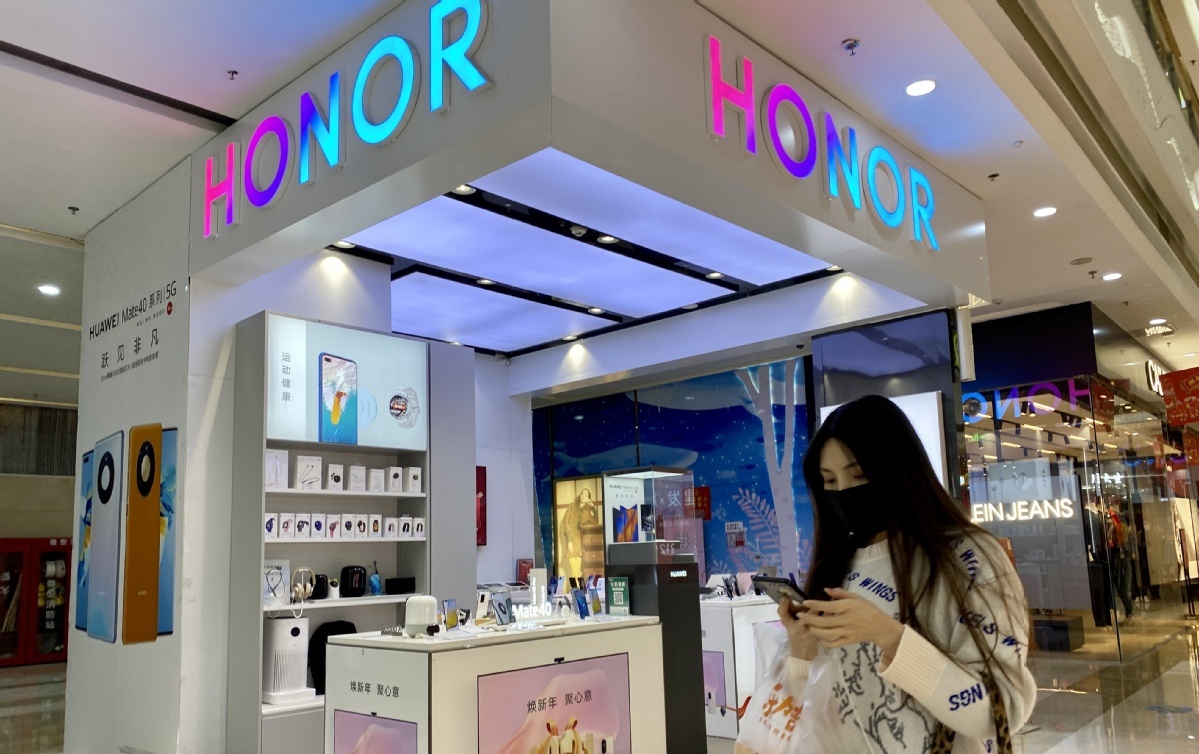 A shopper looks at her mobile phone at an Honor store in Putian, Fujian province. (Photo: China Daily)

Zhao Ming, CEO of Honor, said the company plans to be among the world's top 500 companies, but he did not disclose more details such as its revenue in 2020. Before Huawei sold Honor in November, Honor's annual shipments of smartphones once exceeded 70 million units.

According to Zhao, Honor will launch a high-end flagship smartphone series Magic, which will reach or even surpass the level of Huawei's premium Mate and P series smartphones.

He said although only two generations of Magic smartphones have been unveiled in the past four years, Honor has invested a lot of money in these two phones. In the future, the Magic series will continue to be positioned for exploring futuristic technology.

Huawei sold Honor in November to a Chinese consortium of over 30 agents and dealers to ensure the brand's survival after it faced severe pressure due to the persistent unavailability of technical components needed for its mobile phone business.

Four months on, Honor did not speak too much in the public except releasing its new phone V40 series in January. At that time, the company said it had already inked partnerships with major chip suppliers such as Intel, Micron and Qualcomm, which meant that the company has made significant progress in reconstructing its supply chains after leaving Huawei.

"We will continue listening to consumers' preferences while leveraging our technological edge to meet their demands at the same time," Zhao said.

The company will also further expand its retail footprint in the country by setting up offline stores in more cities. The plan came after Honor had opened more than 2,300 offline stores by the end of 2019.

"The growing presence of Honor in offline markets shows that retailers are optimistic about the company's prospects and are willing to become partners in the new company," said Fu Liang, an independent telecom expert who has been following the industry for more than a decade.

Honor has been accelerating its offline presence and building a better retail network after gaining its independence, but challenges also exist as to how it can appeal to both premium customers and the mass market, Fu said.

Market research company Gartner Inc forecast that worldwide sales of smartphones will total 1.5 billion units in 2021, up 11.4 percent on a yearly basis.