Among Volkswagen's 24 Chinese plants, 22 have resumed productions of vehicles and components, according to a release by the company on Tuesday. 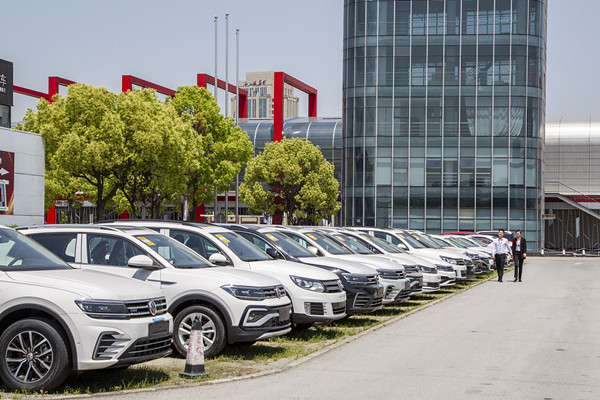 "Hope is returning on the Chinese market," said Stephan Wöllenstein, CEO of Volkswagen Group China, in the release. "There are more and more signs that business is recovering. By the middle of the year, we could be back to last year's planning.”

Only the vehicle plants in Changsha and Urumqi are still yet to open, according to the release.

"We are cautiously optimistic that the worst effects of the crisis will be behind us in two to three months," said Wöllenstein, adding that the interest of many customers in buying cars was still limited, as many plants were operating at a reduced capacity.

Nevertheless, he said Volkswagen is prepared to increase production if demand picks up.

Volkswagen Group China's sales figures have recently shown signs of improvement. Sales are expected to increase to 1 million vehicles in March, which would be a vast improvement on February when only about 250,000 cars were sold across the country.

More than 95% of all Volkswagen Group dealers have reopened their showrooms. Customer frequency is around 60% compared with normal phases. "I expect the car business to reach last year's level in early summer," Wöllenstein said.

The Volkswagen brand alone is represented in China by more than 2,000 dealers.

It remains uncertain to what extent an expected recovery could offset the slump in the first quarter. For the year as a whole, the company is therefore planning with different scenarios that assume a decline of between 3% and 15% in the Chinese car market.

"The 'crystal ball' principle still applies," Wöllenstein said. "Precise forecasts are hardly possible at present because developments in the second half of the year depend on many factors that are difficult to calculate."

In the release, the Volkswagen China CEO cited as factors the purchasing behavior of customers when things return to normal, possible special economic stimulus programs for the Chinese auto industry, and the country's overall economic development in light of the global pandemic.

Together with its Chinese partners, Volkswagen Group is sticking to the announced investments of more than 4 billion euros this year. "We assume that the recovery will continue and that we will be operating in a normal market environment again in 2021," Wöllenstein emphasized. "And China will not lose its status as a powerhouse of the global automotive industry in the long term either. The trends of electromobility and digitalization will be shaped here."

Around 40% of the planned investments alone will go into electric vehicles. This year, for example, production of new electric models based on the modular electric drive matrix (MEB) is due to start at plants in Anting (SAIC Volkswagen) and Foshan (FAW-Volkswagen). Both plants are specially designed for the production of purely electric cars.

"It is good that we are entering the post-crisis period with strong new models," Wöllenstein said, adding that Volkswagen Group plans to sell 1.5 million electric cars per year in China starting from 2025.