How Chinese drone makers help with US, UK combat COVID-19? 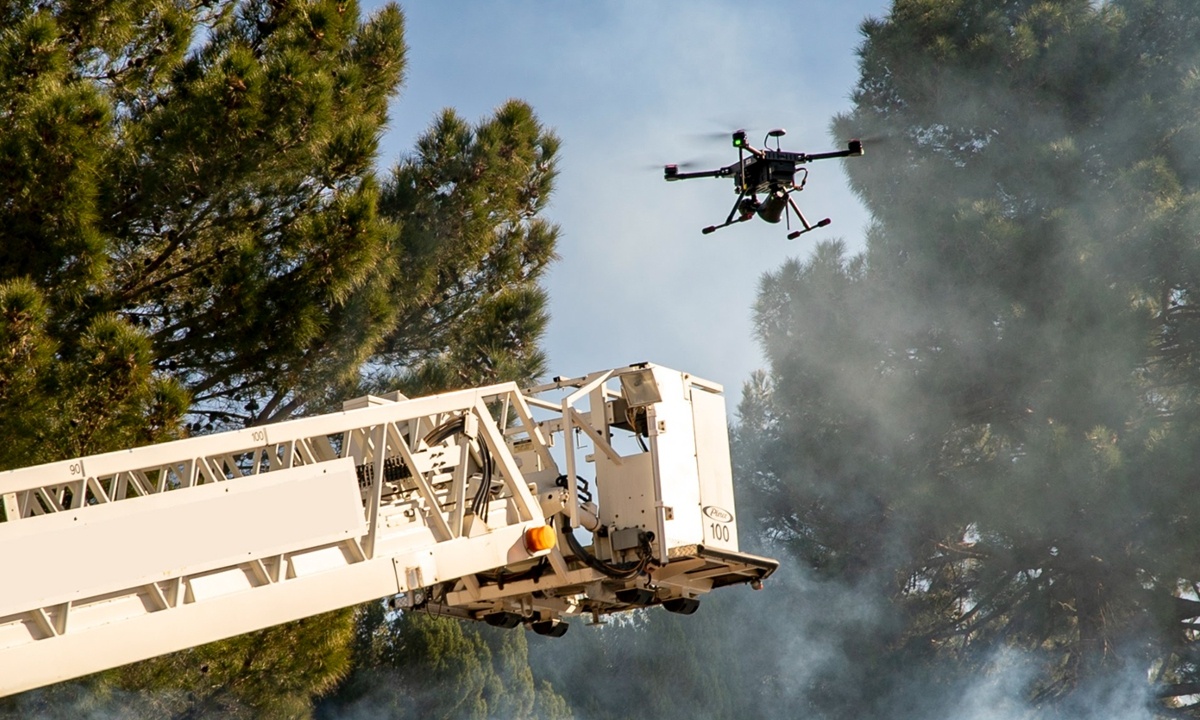 An AEE drone with a loudspeaker helps with fire reconnaissance and dispersing residents in a widefire in California in September. Photo: Courtesy of AEE

While the US government is making life difficult for Chinese drone makers by imposing economic sanctions on them, Washington has ignored how these companies have been helping the US in combating COVID-19, and undergoing some high-risk rescue operations.

Shenzhen-based drone maker, AEE Aviation Technology Co, which entered the US market seven years ago, told the Global Times that the US' need for drones taking COVID-19 testing kits to the borders, or loudspeaker drones to disperse crowds so they could keep social distancing, has grown significantly.

Carrying a customized thermotank, the drone is able to load the COVID-19 testing kits together with the thermotank to a maximum of one kilogram. It has been trialed at the US border area with Mexico for months.

"Once a large number of stowaways come to the border area, the drones could deliver a large number of testing kits to those in need," Zeng Desen, the general manager of AEE's overseas sales department, told the Global Times.

Currently, the company is cooperating with pharmaceutical companies to take pilot trials of delivering COVID-19 vaccines to scattered clinics in the US, according to Zeng.

AEE is not alone. Guangzhou-headquartered agricultural drone-maker XAG has provided the UK government with drone equipment which could help emit disinfectant.

"As we rolled out and tested a ground solution - R150 Unmanned Ground Vehicle later in China, small patches of R150 has been exported to the UK, which are being trialed in schools, hospitals and residential communities," XAG told the Global Times.

Instead of sending emergency respondents into the high-risk areas, the company said this unmanned solution can protect operator from unnecessary exposure to the virus and disinfectants, while reducing the risk of virus transmission through surface contact.

In addition to the UK, XAG has worked with overseas partners in Vietnam, Italy, South Korea, and Australia, applying agricultural drones into disinfection of virus hotspot, with the target areas including government office building, primary school and waste collection points.

Unlike previous years, Zeng is unable to travel abroad frequently to explore overseas markets due to COVID-19. As the company's vice president, Zeng is now striving to tap domestic market and increase the company's sales here from 30 percent to 60 percent.

The decision was made when few western consumers buy drones amid a sluggish global economic recovery as the product is not a daily necessity.

"When shops shut down in the US and Europe, consumers' demand for drones dropped, which has created a significant impact on our sales," Zeng told the Global Times.

However, drones sold to police in US, Russia, the Middle East and other overseas markets saw 40 percent sales rise at AEE, as local governments find them helpful to promote law enforcement, according to Zeng.

Installing a loudspeaker on the drone assists in delivering messages from police to demonstrators in public areas, Zeng said, especially when marches were frequent this year during the US presidential election.

Thanks to drone technology, police officers and firefighters in the US can now perform necessary and risky duties safely and more effectively.

"They've been particularly useful in finding hot spots in buildings and complex fires, giving the incident commander the kind of stand-off distance or perspective to better evaluate a situation before sending personnel in to fight a fire," the report said.

For a Chinese company which sells drones to American police, Zeng said they have concerns of being blacklisted by the US government ,after more and more Chinese drone makers were put on the entity list by the Trump administration.

"We have met the strict requirements by our US customers by signing contracts which ensure we do not store data backstage, and we make customized changes as required by the customers," Zeng said, reaffirming the company has met US regulations.

On December 18, The Bureau of Industry and Security of the US Department of Commerce put 77 entities on its "entity list." Chinese drone maker and also a global drone pacesetter DJI was on the list.

A DJI representative confirmed to the Global Times on December 20 that its products can still be sold in the US, but it's hard to tell what other impact the sanctions will produce on his company.

Responding to the US entity list put on DJI, XAG said US is a potential market that has yet to be exploited at present, so this action has no impact on the company's overseas business.

"In fact, the market share of Chinese drone makers has not decreased in recent years despite US sanctions, as China has already led the market for many years, leaving few western countries to fill in gaps or replace Chinese competitors," Zeng noted, adding the country boasts a highly developed supply chain and advanced technology in delivering industrial and consumer-use drones.