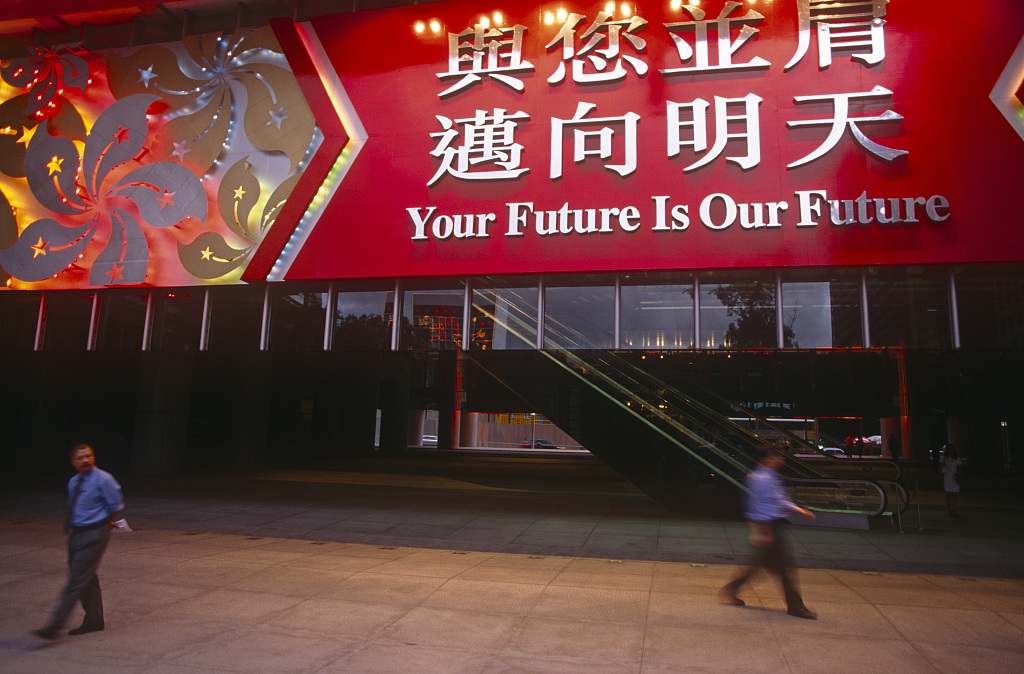 A large banner hangs over the entrance of the HSBC bank in Central, Hong Kong, July 1, 1997. (Photo: VCG)

Backed by Beijing, the Hong Kong Monetary Authority (HKMA) made the controversial decision on August 14 to enter the market, buying up 118 billion HK dollars' (15 billion U.S. dollars) worth of stocks and futures in two breathtaking weeks of trading, and eventually driving out international speculators.

The 1990s saw the liberalization of capital markets in Asia. International hot money was pouring into Asia amid praise for the "Asian Miracle" and bloated optimism. As a key commercial hub with the freest economy in the world, Hong Kong also benefited from the boom, particularly in the property market. But a storm was brewing.

On July 2, 1997, just a day after Hong Kong's return to China, Thailand became the first casualty in the Asian financial crisis, following a calculated attack on the baht from international speculators. The country was forced to abandon the baht's fixed exchange rate with the U.S. dollar, effectively crashing the currency.

The crisis quickly spread across the region as predatory hedge funds, such as Soros' Quantum Fund, feasted on the bloodbath by shorting the Asian markets. One after the other, the currencies of Malaysia, Indonesia, the Philippines and South Korea were brought to the ground. The huge influx of foreign capital that had fueled Asia's boom was quickly pulled out, leaving a trail of destruction.

In 1997, Hong Kong's economy was more resilient than its Asian peers. The real estate market was booming, and the HSI peaked at 16,673 points in August. However, leading international opinion at the time was bearish on the city's economic future with China.

Forbes magazine published a piece on June 26, 1995, titled "The death of Hong Kong," predicting that the city's days as a vibrant international financial center were coming to an end after the 1997 handover.

Speculators saw the perfect opportunity to make a killing.

By then Soros was unstoppable, having amassed many billions of profits wreaking havoc around Asia. The reviled financier, who famously attacked the British pound in 1992 then the Mexican peso in 1995, held remarkable sway over international hot money. Few thought a small but open economy like Hong Kong stood a chance against the veteran investor.

Since July 1997, Soros and others launched a series of attacks on the HK dollar. With limited options to fight back, the HKMA responded each time by raising the interest rate to make the speculators' bets costlier. The interest rate shot up nearly 300 percent overnight at one point in October. As a result, Hong Kong's real economy suffered.

The interest defense was powerless against the speculators' double attacks on both the Hong Kong dollar and the Hang Seng equity market, which were impacted by the hikes. The speculators would gain either way.

A test of will

Rumors had begun to spread about a devaluation of the Chinese renminbi, which led to bank runs. The speculators were betting on the HKMA to give up the HK dollar's linked exchange rate with U.S. dollar.

The U.S. dollar peg, which had been in place since 1983, was a pillar for Hong Kong's externally oriented economy. China's currency was shielded from open attacks, but could have been forced to weaken in order to maintain export competitiveness. Nevertheless, its stability was vital to public confidence in Hong Kong.

The Chinese government repeatedly pledged that the renminbi would not be devalued. At a press conference in March, then Chinese Premier Zhu Rongji promised that the central government would protect Hong Kong from the financial crisis "at all costs."

"The authorities of Chinese mainland have also expressed unequivocal support for the HK dollar's link to the U.S. dollar," said HKMA chief Joseph Yam in a speech in March. "There is a standing offer for extending help, if help is required, in the use of the mainland's foreign reserves (140 billion U.S. dollars)."

With this reassurance, on August 14, the HKMA and then Finance Secretary Donald Tsang declared war on speculators.

After record trading of 79 billion HK dollars (almost 10 billion U.S. dollars), the Hang Seng Index was pushed up against crushing pressure from speculative selling, closing at 7,829 on the final day of the showdown on August 28.

The HKSAR government defeated Soros, who was forced to walk away with losses. The intervention committed as much as 10 billion U.S. dollars of Hong Kong's 96 billion forex reserves.

Not only was the currency link successfully defended, but it was also strengthened. Both the HK dollar and Chinese renminbi stood firm.

China honored its promise not to devalue the renminbi. This greatly helped calm the markets amid extreme volatility. By refusing to play the game of "competitive devaluation," China had accepted domestic sacrifices for the common good, wrote Y. C. Jao of the University of Hong Kong in his 2001 book on the Asian financial crisis.

The intervention, dubbed "gamble of the century," took great courage since it would damage the city's laissez-faire reputation. The move was widely criticized by international opinion leaders, including Nobel Laureate Milton Friedman and then Federal Reserves chairman Alan Greenspan.

At the height of the crisis, it was "a matter of survival to preserve local community confidence, protect the integrity of the linked exchange rate to the U.S. dollar as well as restore a level playing field to the stock and money markets," Tsang said in 1998.

A decade later, Greenspan wrote that the HKSAR had made the right call. Soros himself also admitted in 2001 that the authorities did "a very good job when they intervened to arrest the collapse of the Hong Kong market."