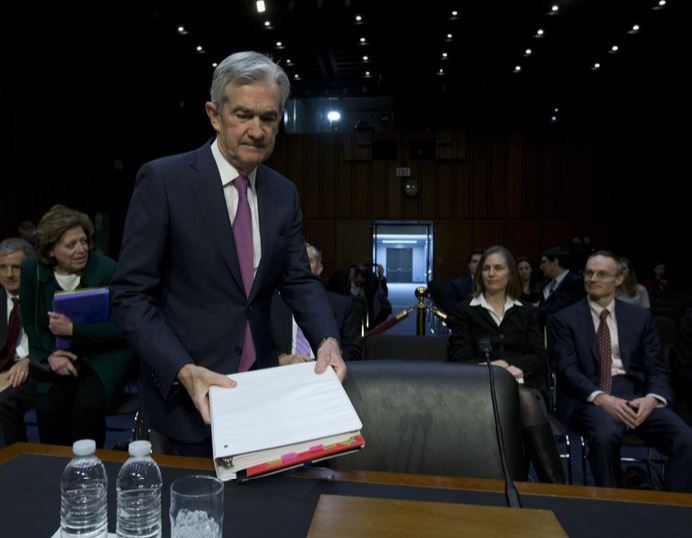 Federal Reserve Board Chair Jerome Powell arrives to testify before the Congress Joint Economic Committee, on the economic outlook, on Capitol Hill in Washington on Nov. 13, 2019. (Photo: AP)

About a year ago, Federal Reserve officials were nervous. Markets were cratering. Fear about a trade war was rising. The officials needed to know if the turmoil was chilling consumer spending. Problem was, a partial shutdown of the government had halted the release of most economic data.

So Fed officials did something they couldn’t have done during previous shutdowns. They turned to a backup: Consumer spending figures from First Data, a card payment company that processes about $2 trillion in transactions each year. First Data’s figures showed that most consumers were shrugging off the upheaval. Weeks later, when the government’s data was finally released, it closely tracked First Data’s figures.

“It was a big deal for the Fed in terms of having information about the economy when the retail sales data did not come out,” said Claudia Sahm, a former Fed staffer who helped compile the First Data figures. Fed policymakers were “extremely interested in what those readings were.”

The experience seems to have whetted the Fed’s appetite for private sources of data that can help assess the economy’s health. An institution that often calls its interest-rate stance “data-dependent,” the Fed is increasingly recognizing that some privately produced data is nearly as accurate as — and often timelier than — the government reports that it has long depended upon.

“We have been working with big data ... with the purpose of better understanding the current position of the economy,” Chairman Jerome Powell said last summer. “It’s an area of real interest for us.”

Thanks to an array of technological breakthroughs, the potential opportunities have expanded. Millions of financial transactions, digitized and compiled by private firms, could help the Fed and other government agencies track changes in company sales, prices, and wages. Computer processing power and data storage have become cheaper. Advanced software can make it easy to manipulate huge troves of raw data.

The biggest question is the potential payoff: Could the Fed’s use of privately produced economic data help it detect — and fight — recessions more quickly? If so, government officials could, in theory, minimize job losses and the social and psychological upheavals that economic crises cause.

“These data are becoming of increasing practical importance for figuring out the state of the economy for policy making,” Matthew Shapiro, an economist at the University of Michigan who specializes in the practical use of economic data, said at a conference last fall. “The quality of official statistics is going to deteriorate without help from big data.”

That’s because most government reports rely on surveys, which are costly and have been marred by declining response rates from businesses and households. Fewer homes have landline phones or respond to calls. And the surveys require detailed responses that households and companies are less inclined to provide.

By contrast, privately produced “big data” is automatically generated as people go about their daily lives. It is typically available faster than government reports. And it can show pinpoint information about neighborhoods and regions. First Data’s figures, for example, can reveal spending patterns down to the city level. By contrast, the government’s equivalent — a monthly retail sales report from the Commerce Department — captures only national trends.

Fed economists have discovered that data from the payroll processor ADP might have more quickly illustrated the severity of the 2008-09 Great Recession than the government’s own data did. In early 2008, the government’s initial reports on monthly employment had shown relatively few job losses. Months later, though, those figures were revised sharply higher to reveal much more severe job losses.

Tomaz Cajner, a Fed economist, and four colleagues used raw ADP data to construct a separate measure of employment. (ADP compiles payroll records for companies that employ about one-fifth of the workforce.) That measure found that in the first eight months of 2008, roughly 1 million jobs had been lost — more than the government’s initial measure of 750,000 and nearer the final revised total of 1.4 million losses.

“Our new measure, had it been available in 2008, would have been much closer to the revised data, alerting us that the job situation might be considerably worse than the official data suggested,” Powell said in a speech last fall.

The First Data figures, too, could have provided the Fed with an early warning, Sahm noted. As late as May 2007, Ben Bernanke, then the Fed chairman, had suggested that the impact of the housing bust, which ultimately ignited the Great Recession, would “likely be limited” and probably wouldn’t significantly damage the economy.

Subsequent research showed that spending began to fall earlier in states where home prices had risen the most and then collapsed, such as Florida and Nevada. The Fed’s First Data figures, had they been available then, could have shown that spending decline in real time. Fed economists might have known earlier than they did that the housing bust was depressing consumer spending and endangering the economy.