The shock exit of two high-level HSBC executives within a week, including its top executive and the head of key China business, has put the 150-year-old, London-based banking giant under public scrutiny and mounting speculations. 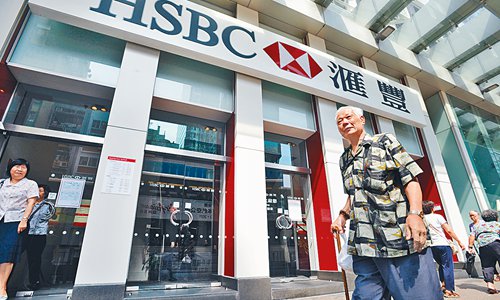 People pass by a HSBC bank in Hong Kong in February. (Photo: IC)

Late on Monday, Europe's biggest bank issued a Chinese statement on its official WeChat account, denying media reports that linked the resignations of its two executives with shareholder pressure over external affairs.

The statement came as China's Ping An Insurance, the largest HSBC shareholder, was reported to have been a major promoter of the two executives' resignations.

Ping An Insurance overtook New York-based BlackRock, the world's biggest asset manager, to become the largest shareholder of HSBC in November last year, with a stake of over 7 percent.

A person close to Ping An refuted the reports, telling the Global Times on Monday that, "It is only those media that want to make hype and attract attention."

Ping An clarified on Tuesday morning that it does not engage in the daily operations and management of HSBC, saying its investment in the bank is "purely financial investment."

This also comes amid the bank's alleged involvement in the US' investigation into Chinese telecommunications giant Huawei. While HSBC has stressed that the top management change "has no relation" with the Huawei issue.

"We will continue to contribute to the economic prosperity of the Chinese mainland and Hong Kong Special Administrative Region," HSBC said in the Monday statement.

On Friday, HSBC Holdings' Greater China Chief Executive Helen Wong resigned from her position, marking the second exit of a senior executive from the bank within a week. Wong, who joined the company in 1992, decided to leave to "pursue an external opportunity," according to HSBC's spokesperson.

Wong's vacancy will not be filled. Instead, the position will be eliminated and the four regional chiefs who previously worked under Wong will continue to collaborate.

Just days before, after only 18 months in the role, John Flint stepped down from his post as Group Chief Executive, and as a director, after "mutual agreement with the Board," according HSBC's statement on August 5.

He was replaced by interim chief Noel Quinn. The bank stated that, "In the increasingly complex and challenging global environment in which the bank operates, the board believes a change is needed to meet the challenges that we face and to capture the very significant opportunities before us."

After almost 3 decades with HSBC, Flint was quoted in the statement to have said, "I will be sad to leave but I do so looking forward to a new personal challenge, and confident that our people will continue to serve the Bank's stakeholders in the best possible way."

The surprise announcement comes amid HSBC's report of a solid 15.8 percent rise in pretax profits to $12.4 billion in the first six months of 2019. The bank announced a further stock buyback of $1 billion, which defied "some analysts' expectations it might pause its strategy of returning extra capital to investors," Reuters reported.

An anonymous insider told the Global Times that he considers the move to be the result of an internal reason, as some top-level disagreements emerged during Flint's management. The insider refused to disclose more details.

Despite the company's statement, the shock departure of two top executives within a week still brews speculations that the move might be related to external issues.

"There must be some relations, even [if Huawei] is not the main reason," an industry insider told the Global Times.

Dong Shaopeng, an advisor for the China Securities Regulatory Commission, told the Global Times on Monday that the consecutive changes at HSBC's executive level are likely related to the arrest of Huawei's CFO Meng Wanzhou in Canada.

The bank has helped lead US charges against Huawei, as it was attempting to convince the US Department of Justice (DOJ) to dismiss criminal charges for the bank's own misconduct involving US sanctions, Reuters reported in February.

A source close to the matter told the Global Times previously that the manner in which HSBC helped the DOJ acquire documents against Huawei was unethical, as the bank gave out its clients' confidential information in pursuit of its own interests.

HSBC's assistance with the US prosecutors' charge against Huawei, which has far exceeded its normal business sphere, has proved the company's obedience to US hegemony or so-called "long-arm jurisdiction," according to Dong, who added that the issue has harmed HSBC's integrity and morality.

China has been consistent in its opening-up by welcoming foreign capital investment, but for those who have enjoyed the dividends of China's reform and opening-up policy over the past decades yet turned their backs or worked against China's national interests, they deserve criticism and punishment, Dong said.

Growing numbers of Chinese internet users are calling for HSBC's addition to China's blacklist, as the unreliable entity list is still being drafted.

Some have also said that HSBC should be one of the first companies placed on the list.

Chinese Foreign Ministry Spokesperson Hua Chunying, when asked at a press conference in early August to comment on the possibility that HSBC will be added to the blacklist, said that the list is still undergoing relevant procedures.

HSBC has been lobbying the Chinese government to absolve it of any blame for Meng's arrest, saying it had no choice but to cooperate with the investigation and provide information that US authorities needed to build a case against Huawei, according to media reports.

Other than the alleged illegal role it played in the arrest of Huawei's CFO, which cast a shadow on its mainland businesses, insiders cautioned that the UK-based lender also faces other challenges amid rising global uncertainties such as the UK's Brexit and the China-US trade war, as well as the unrest in Hong Kong.

About 80 percent of HSBC's earnings come from Asia, and Hong Kong alone provides the bank with about half of its pretax profits, according to a Bloomberg report.

A person close the bank told the Global Times on Tuesday that the company is currently making efforts to cut costs.

Meanwhile, outlook for global investment in the banking sector has also soured, with almost 30,000 layoffs announced since April, citing reasons such as "falling interest rates, weak trading volumes and the march of automation," the Financial Times reported on Monday.

HSBC revealed it would axe 2 percent of its global workforce - more than 4,000 employees - last week.