HSBC (HSBA.L) will reveal a gender pay gap of 59 percent at its main UK banking operation, the biggest yet disclosed by a British bank, according to a copy of the lender’s report on the subject seen by Reuters on Thursday ahead of its publication. 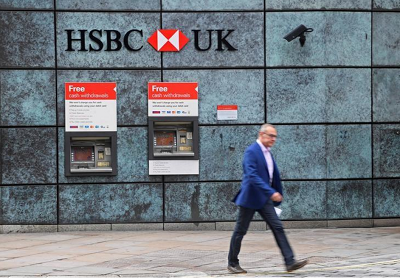 File photo: A worker walks past a branch of HSBC bank in the City of London financial district in London September 4, 2017. (Photo: Reuters)

The bank will also disclose a mean gender bonus gap of 86 percent at HSBC Bank Plc, which is the biggest of the lender’s seven entities in Britain and employs 23,507 people.

A spokeswoman for the bank confirmed the contents of the report.

The gender pay gap is the biggest yet reported by a British financial firm, according to government data, with some firms yet to provide figures ahead of an April deadline set by Prime Minister Theresa May last year.

Almost 50 years since the passage of Britain’s equal pay act, the continued gulf in earnings between men and women has attracted significant public attention over the past year or so.

In common with other banks, HSBC said its pay gap was largely accounted for by the bank having fewer women in senior roles.

The gender pay gap measures the difference between the average salary of men and women, calculated on an hourly basis.

HSBC said women held only 23 percent of senior leadership positions in its workforce in Britain, despite accounting for more than half of total staff.

The bank said it was taking a number of steps to reduce the pay gap, including committing to an aspirational target of women holding 30 percent of senior roles by 2020.

Last month, Asia-focused Standard Chartered reported a gap of 30 percent in Britain, while Virgin Money - the only major UK lender run by a woman - said its female staff earned on average 32.5 percent less per hour than its male workforce.

Barclays said last month it paid women in its international division, which houses its investment bank, on average 48 percent of what men earned in fixed pay.

The pay gaps have drawn criticism from lawmakers and are likely to spur questions from investors in the upcoming season for shareholder meetings, with stock prices and future earnings potential strongly linked to banks’ efforts to revive their reputations in the wake of the global financial crisis.