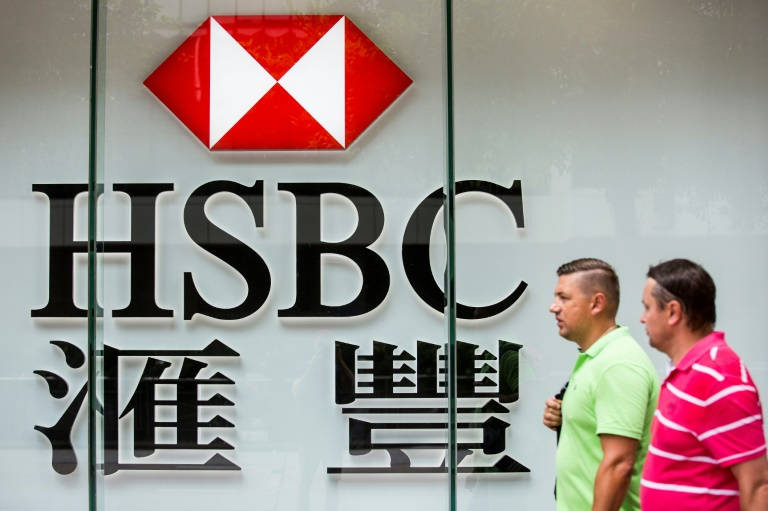 Pre-tax profit soared to $4.6 billion (4.0 billion euros) in the period from July to September from $843 million in the same period of last year, HSBC said in a statement.

Nevertheless, the comparable 2016 figure had been negatively affected by one-off factors such as huge writedowns and restructuring charges.

Adjusted for these, pre-tax profit fell by one percent year-on-year in the July-September period, HSBC said.

At the bottom line, the bank turned in a third-quarter net profit of $2.96 billion, compared with a year-earlier loss of $617 million, when the HSBC took a massive hit on the sale of its operations in Brazil.

The results come weeks after a new chief executive was named as part of a management overhaul.

John Flint, currently head of retail banking and wealth management, will take over as CEO from Stuart Gulliver in February, and has said he wants to "accelerate the pace of change".

Analysts said the third-quarter numbers were better than expected.

"I think HSBC is one of the best international banking stocks at this moment," Dickie Wong, executive director of research at Kingston Securities, told AFP.

"It is the third consecutive quarter that earnings and revenue have increased."

But while HSBC did well in retail and commercial banking, the group's performance in global banking and markets was down slightly in the third quarter.

The Asia-focused firm has been on a recovery drive to streamline its business and slash costs since 2015, including laying off tens of thousands of staff.

CEO Gulliver said the bank had "maintained good momentum in the third quarter", with higher revenue across its main global businesses.

"Our pivot to Asia is driving higher returns and lending growth, particularly in Hong Kong," he said.

The bank's strategy of expanding operations in the Pearl River Delta, an area of southern China where major cities such as Hong Kong and Guangzhou are situated, "is starting to obviously bear fruit for our shareholders", the chief executive told a press conference in London.

Asia accounted for just over 73 percent of HSBC's adjusted pre-tax profit in the third quarter of 2017, compared to just over 68 percent a year earlier.

"Regionally, it's Asia which is doing the heavy lifting for HSBC (...) its business primarily resides in the far east," said Laith Khalaf, analyst at stockbroker Hargreaves Lansdown.

CEO Gulliver painted a positive picture of the bank's preparation for Brexit, describing HSBC's position as "pretty good" compared to that of other banks.

"We're not seeing in our commercial banking business or in our global banking markets business any material negative impact from Brexit," Gulliver said.

HSBC is able to move "up to 1,000" employees to France, he added, where it has been operating for almost two decades.

While Gulliver said the bank's "assumption of a pretty hard Brexit" had not changed, he estimated the overall cost of Brexit to HSBC in coming years would be around "$200 million to $300 million".