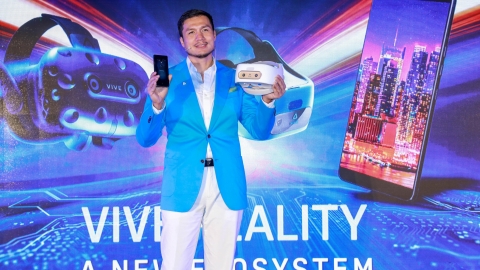 It also released the U12 Plus smartphone capable of integrating and interacting with VR devices, such as being able to answer WeChat messages while playing VR games.

With the new smartphone, 12 hardware vendor partners and over 30,000 developers, HTC aims to build an upgraded ecosystem covering various devices and technologies, the company said during the annual VIVE Ecosystem Conference, or VEC2018, in Shenzhen.

“We combine our heritage of innovation in the mobile sector with our industry leadership in the VR/AR field, marking a clear step forward in increasing adoption to the masses,” said HTC China’s President Alvin Wang Graylin.

Spending on augmented reality and virtual reality (AR/VR) in the Asia Pacific region, excluding Japan, is forecast to double in 2018. China will be the largest AR/VR spending region this year, according to International Data Corp, a US-based research firm.

On a geographic basis, China will be the region with the largest AR/VR spending, accounting for 91.3 percent of overall spending in the region, IDC said in the latest report.

Raymond Pao, HTC’s North Asia general manager, also anticipated the huge potential of industrial use of VR, such as in entertainment and education industries.