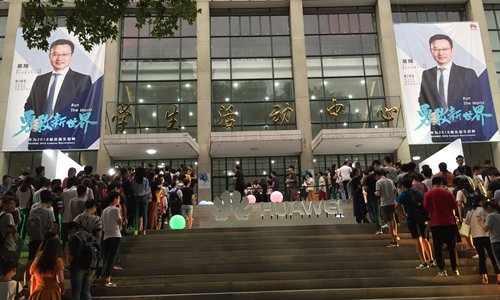 Huawei holds a teach-in for graduates at Wuhan University in Wuhan, Central China's Hubei Province in September 2017 to promote the company.（Photo: VCG）

Recent reports said Chinese top university graduates took more diverse jobs in 2018, with more of them choosing to work in smaller cities or in private enterprises rather than in State-owned institutes.    Last year, Chinese tech giant Huawei was the top choice for graduates of four of China's elite universities, namely, Tsinghua University, Peking University, Shanghai Jiao Tong University and Fudan University, China Securities Journal reported Monday. The company recruited a total of 582 graduates from the four universities, the report said. Following Huawei, Tencent recruited 221 graduates from the same universities, 74 of whom graduated from Tsinghua. Sun Wenlin, a Tsinghua graduate who works in Huawei, told the Global Times on Tuesday that he selected Huawei for its enterprise culture, which is  independent research and innovation."I work in the company's marketing department and have learned a lot about retail sales techniques since joining the company," Sun said. "The teams at Huawei are cohesive, possess executive qualities and they keep improving themselves," Sun said.A graduate from Southeast University in Nanjing, East China's Jiangsu Province surnamed Xie told the Global Times on Tuesday that a high salary and opportunities made him choose to work at Huawei."Huawei has many offices around the country and its overseas market can offer me a lot of opportunities," Xie said. "I also have more clients there than in other companies which can help broaden my horizons."China Youth Daily looked through the employment status of graduates from 34 universities, and reported on Monday that more than half of the graduates from six top universities in Beijing left the capital after graduating due to growing pressure. However, less-developed western areas and smaller cities appear to be attracting more graduates due to their improving economies and incentives. For example, 562 Peking University graduates and 288 from Tsinghua went to work in such places in 2018, China Youth Daily reported.