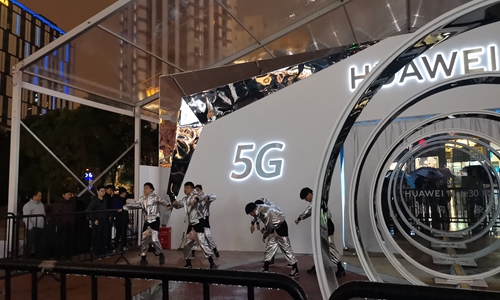 A temporary experience store of Huawei in Shanghai on Saturday. (Photo: VCG)

A former Huawei employee was detained for 251 days on accusations that he blackmailed his department for severance payments and released for lack of evidence, which sparked uproar among netizens over the environment of the Chinese tech giant over the weekend.

Li Hongyuan, who worked at Huawei's inverter sales department from 2005 to 2018, was sued by the company for alleged embezzlement and blackmail in December 2018. Li was accused of blackmailing his department head, threatening to report the head's violation of the company's rule unless he pays over 300,000 yuan ($42,600), according to a court document.

However, Li claimed that the money is the severance compensation package agreed with the company. The money was sent to him through a secretary's private account on March 8, 2018.

Li was released on August 22 due to a lack of evidence. Following the court's decision, Li was given compensation of more than 100,000 yuan.

After being stripped of his freedom for 251 days, Li told the Global Times that he is still waiting for Huawei to give him a fair explanation.

Huawei said it has the right and an obligation to report to judicial authorities suspected illegal activities. "We respect the decisions. If Li believes his rights have been harmed, we support his use of legal measures to defend his rights, including suing Huawei. It also shows that all are equal under the law," Huawei said in a statement on Sunday.

Li's wife told the Global Times on condition of anonymity that Li is facing huge psychological pressure after he found himself at the epicenter of public attention.

Shenzhen authorities arrested Li on January 22 on suspicion of extortion. Li then provided police with a recording of him negotiating severance payments of 300,000 yuan with Huawei's human resources department. In the recording, the conversation has no connection with anything about him reporting his superior's violation or blackmailing, Shanghai-based news portal jiemian.com reported Sunday.

The case sparked heated debate over the weekend. Some netizens raised concerns about whether there are significant flaws in Huawei's management system.

While some netizens argued that a telecoms empire like Huawei, with more than 100,000 employees, should have a more mature management mechanism.

Huawei's failure to resolve the conflict in a more reasonable way reflects loopholes in its management, they said.

However, some were opposed to using the incident to define Huawei's management system. It was reported that Huawei invests heavily every year to optimize its management. It is not only leading the world in 5G network technology, but has also trained a large number of IT talent for China.

China's big internet companies have long been characterized by a high-intensity work environment. Netizens suggest that "violent layoffs" at some large internet companies are unacceptable. They called on companies to be more humane and legal in dealing with employee departures.