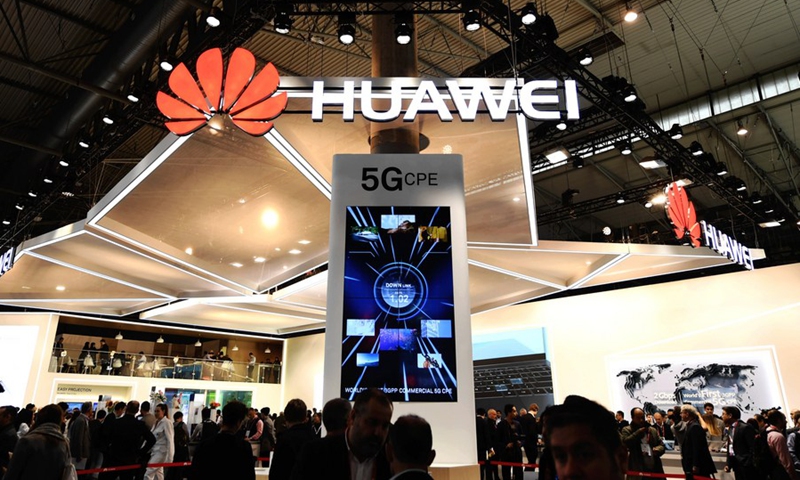 Photo taken on Feb. 26, 2018 shows a screen displaying the 5G technology at the booth of China's telecom giant Huawei during the 2018 Mobile World Congress (MWC) in Barcelona, Spain.(File photo: Xinhua)

The Swedish telecom authority failed to produce any facts or evidence to demonstrate that Huawei's equipment has technical security issues, and the latest court ruling in the country against the Chinese company's 5G equipment is disappointing but the firm will continuing pursuing its legitimate rights on the issue, Huawei told the Global Times on Wednesday.

A Swedish court on Tuesday upheld a ban against the Chinese firm selling 5G equipment in the country, giving the Swedish Post and Telecom Authority the right to shut out the firm from the country's 5G networks, according to local media reports.

"Huawei notes today's judgment of the Stockholm Administrative Court, which we respect. Whilst we are disappointed with this outcome, the verdict is not the final ruling on our case," a Huawei spokesperson told the Global Times on Wednesday morning.

The firm says it is currently reviewing the judgment and the court's reasoning to determine what further legal remedies to pursue to protect the company's legitimate rights and interests, and "our door remains open to constructive dialogues with relevant parties to work out practical solutions to mitigate any security concern," the spokesperson added.

For Tuesday's ruling, the PTS failed to produce any facts or evidence to demonstrate that Huawei's equipment has technical security issues, Huawei's spokesperson said, noting that rather, in submissions to the Court, the PTS clearly stated that it "has no basis for claiming that there are proven technical vulnerabilities in equipment or software from Huawei."

"We encourage relevant Swedish authorities to rely on objective, unbiased and verifiable cyber security standards based on facts," he added.

Chinese Ambassador to Sweden told Swedish media in mid-May that the ban on Huawei was not based on facts and had no legal support, but was a politicized decision that China resolutely objects to, urging the Swedish authorities to correct its mistakes.

The Global Times also exclusively learned from a source close to the matter on May 10 that Chinese mobile operators invited Swedish firm Ericsson to participate in their 5G equipment testing, offering the Swedish firm an opportunity for "interview" to access China's 5G market, which could be the last chance for Sweden to pull back its incorrect decision of excluding Chinese firms such as Huawei from participating in its 5G construction.