Huawei gets advanced chipmaker on mainland 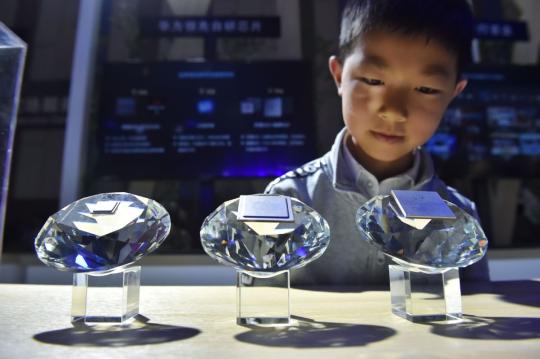 A boy admires Huawei chips on display at an expo in Guiyang, Guizhou province. (Photo: Xinhua)

Huawei's chipset, the Kirin 710A, was produced through an advanced, 14-nanometer manufacturing process by the Shanghai-based chipmaker, marking the first time that a Chinese mainland semiconductor company has commercialized that technology to mass-produce smartphone processors. The process produces more efficient chips.

The move also confirms that Huawei is shifting partial production of its self-designed chips to SMIC, away from Taiwan Semiconductor Manufacturing Co, amid worries about tightened restrictions from the United States government.

Xiang Ligang, director-general of the Information Consumption Alliance, a telecom industry association, said that now, the Kirin 710A chip's design, manufacturing, testing and packaging are all done by Chinese mainland companies, which is a breakthrough for the industry.

The comments came after employees of SMIC Shanghai received Huawei smartphones last week with "Powered by SMIC" printed on the back.

"The line showcased SMIC's commercialization of its 14-nm technologies to make smartphone processors. It is a step from zero to one," Xiang said.

Hua Chuang Securities said in a research note on Tuesday that chip manufacturing is a crucial part of the semiconductor industry chain.

As the US government plans new control measures of semiconductor exports to Huawei, the Chinese tech company risks losing access to Taiwan Semiconductor Manufacturing Co for production of its self-designed chips.

"In such a context, SMIC's progress in 14 nm is very important," the securities company said.

SMIC said earlier that it would expand its production capacity in 14 nm manufacturing to 15,000 wafers per month by the end of 2020.

The company said in its first-quarter financial report on Wednesday that its revenue in the three months was $905 million, up 35 percent year-on-year and marking a record high.

Huawei is also beefing up its own chip research and development capabilities. HiSilicon, Huawei's semiconductor arm, became the first Chinese mainland company to enter the Top 10 global chip rankings, taking the 10th position in the first quarter of 2020, according to market research company IC Insights.

Such progress came as Washington is toughening export controls of semiconductor technologies to China. According to a new rule released by the US Department of Commerce in late April, licenses will be needed for US companies to sell certain items, including semiconductors, to Chinese companies that Washington thinks have ties to the military, even if the products are meant for civilian use. The rule will take effect on June 29.

US semiconductor equipment makers Lam Research and Applied Materials have sent letters to their Chinese clients, asking them not to use their products to make chips for the military or military-civilian initiatives, Chinese media reported on Tuesday night.

Bai Ming, a senior research fellow at the Chinese Academy of International Trade and Economic Cooperation, said, "The new restrictions will harm the US semiconductor industry."

Lam Research said in a recent filing, "Our international sales could be materially and adversely affected by export license requirements and other regulatory changes."

"There is no assurance that we will be issued licenses that we may apply for on a timely basis or at all, which could limit our ability to operate and adversely impact our revenues in China," Lam Research added.