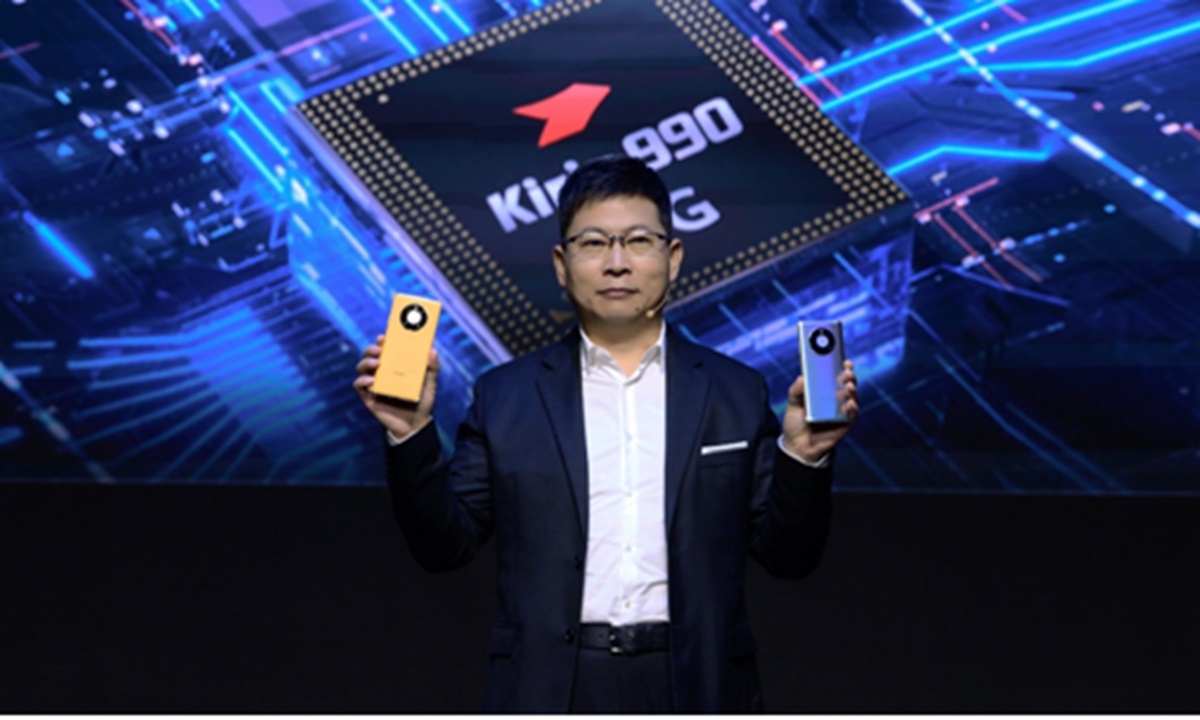 The phones, which are likely to be Huawei's last equipped with its proprietary Kirin chips, are hitting the market at a time when the US crackdown on the firm is intensifying, and more countries are excluding  it from their 5G network rollouts under US government pressure.

Among the very first group of smartphones to carry the cutting-edge 5nm chip, and probably the last to carry its "out-of-print" chips, the launch of the Mate 40 series is impressive and "solemn," Jiang Junmu, chief writer at Chinese telecom industry news website c114.com.cn, told the Global Times on Thursday.

"Among the highlights of the phones will certainly be its self-developed 5nm Kirin 9000 chips," Jiang said.

Richard Yu Chengdong, CEO of Huawei Consumer Business, said during the launch event on Thursday that the Kirin 9000 chipset, also the world's first 5G System on Chip (SOC), will have more powerful 5G capabilities, artificial intelligence capabilities, and stronger CPU and GPU capabilities than its rivals.

"Unlike previous launches, Huawei may have no need to worry about its sales this time, as more people are buying the Mate 40 series as a 'collector's item' rather than a simple new product," Xiang Ligang, director-general of the Beijing-based Information Consumption Alliance, told the Global Times.

"I'm wondering whether I can grab one online as it could probably be the last series with Huawei's art-of-the-state chipset," Serena Chen, a white-collar worker based in Beijing, told the Global Times on Thursday.

Analysts said that although domestic patriotism and Huawei's technology strength have helped it maintain a leading share in the smartphone market over the past year, the company's prospects may be still grave in light of the US supplies ban.

There's no doubt that Huawei can manage to survive the US crackdown, but  chipsets ban may force Huawei to lose advantage to domestic phone-making rivals, which will be increasingly competitive in the future, Ma Jihua, a veteran industry analyst, told the Global Times on Thursday.

The US firm had strong preorder sales despite the China-US tussle. Apple sold more than 150,000 iPhone 12s in China during three days of preorders, according to figures from China's e-commerce platforms and Apple's authorized distributors.

According to IDC, in the first half of this year Huawei and Apple had a combined domestic high-end market share of 88.1 percent for mobile phones with prices above $600. In that segment, Huawei's share was 44.1 percent, edging out Apple for the first place with a slight advantage of 0.1 percentage points.

Moreover, due to an inability to get access to Google's GMS service, the firm will still need to rely on the domestic market for a long period.

"The company is still firmly moving forward amid the headwinds," Jiang said, noting that moves by the US have greatly undermined the trust basis for global cooperation and caused severe damage to the international semiconductor industry.

If this continues, everyone in the industry will be at risk and stand up to fight, Jiang added.