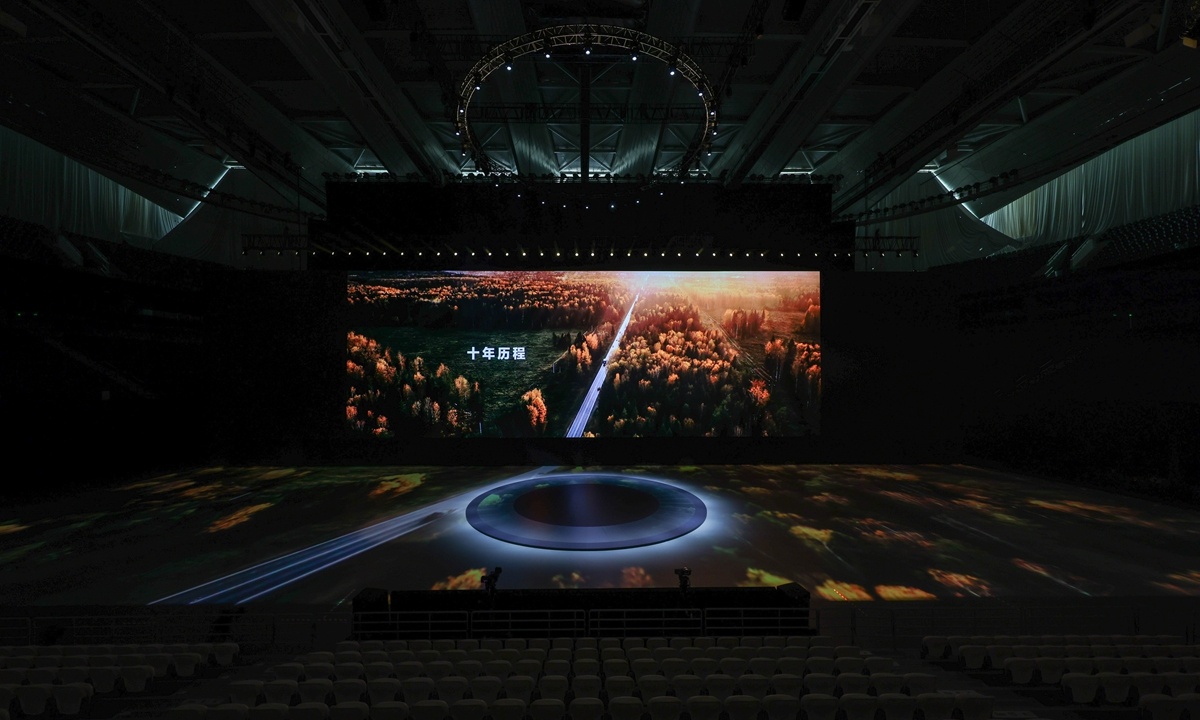 The yellow color design of Huawei Mate 40 was inspired by populus euphratica, a symbol of Chinese spirit of persistence and tenacity in an extremely hostile environment. (Photo: Courtesy of Huawei)

The world's second-largest smartphone maker Huawei unveiled its latest flagship series, Huawei Mate 40, in China on Friday, openly challenging the escalating US crackdown on Chinese firms' high-end chipsets and its US rival Apple's iPhone 12. It was also considered a pledge of the Chinese firm not to abandon its smartphone business under US pressure.

While some analysts considered the latest series as the last generation of smartphones empowered by Huawei's homegrown high-end chipset Kirin given the intensifying sanctions imposed by the US on the firm, which specifically target its chipset division, Richard Yu Chengdong, CEO of Huawei's consumer division, committed to "do everything we can to ensure the supply."

"No matter how hard it is, we'll continue to maintain business operations," he said at a launch ceremony in Shanghai.

As part of the blockade of the US aimed at Huawei, delivering a heavy blow to the overall Chinese high-tech industry, the US has been escalating its measures in curbing supplies to the Chinese tech giant. Most recently, September 15 was the date set by the US for limiting high-end chipset supplies to Huawei, which is expected to have heavily weighed on the company's Kirin chip and high-end flagship smartphones.

By releasing the latest high-end flagship smartphones on schedule, Huawei has not retreated from the market, which shows that actions speak louder than words.

"After three rounds of US sanctions, we are still here releasing new products. No matter how many difficulties there are, we'll strive to find a way to tackle the growing challenges. We will survive and thrive," Yu said.

The latest high-end smartphone is powered by the world's first 5-nanometer 5G chipset, Yu said, claiming that its homebuilt processor technology is 30 percent more effective than Apple's A13.

The latest smartphone also supports the fastest 5G speeds, with an average 5G speeds ranging between 2.6 times and 6.8 times the average speed of other 5G phones, Yu said.

"It won't be the last generation of high-end smartphones," Ma Jihua, a veteran industry analyst and a close Huawei follower, told the Global Times on Friday. One generation of chipsets can support three generations of smartphones, and it is not the case that there's no solution for US sanctions on chipsets either on procurement or self-development, he noted.

"Concerns that the Mate 40 series might be the last generation of Huawei smartphones powered by its homegrown high-end chipset Kirin 9000 are likely to arouse sympathy among Chinese consumers," Jiang Junmu, a veteran industry analyst and chief writer at telecoms industry news website c114.com.cn, told the Global Times on Friday.

It will certainly boost sales of the smartphones in the Chinese market, he said.

As a leader in the smartphone business, Huawei saw its sales volume decline in China for the first time in the third quarter of 2020, shipping only 34.2 million units, according to a report released by market research firm Canalys on Friday.

However, it still led its major rivals, including Apple, Oppo and Xiaomi.

Analysts believe that if the position of the Trump administration does not change, Huawei will attempt to pivot its business strategy to focus on building its self-developed HarmonyOS and software eco-system, as the Chinese government is eager to nurture homegrown alternatives to global platforms. 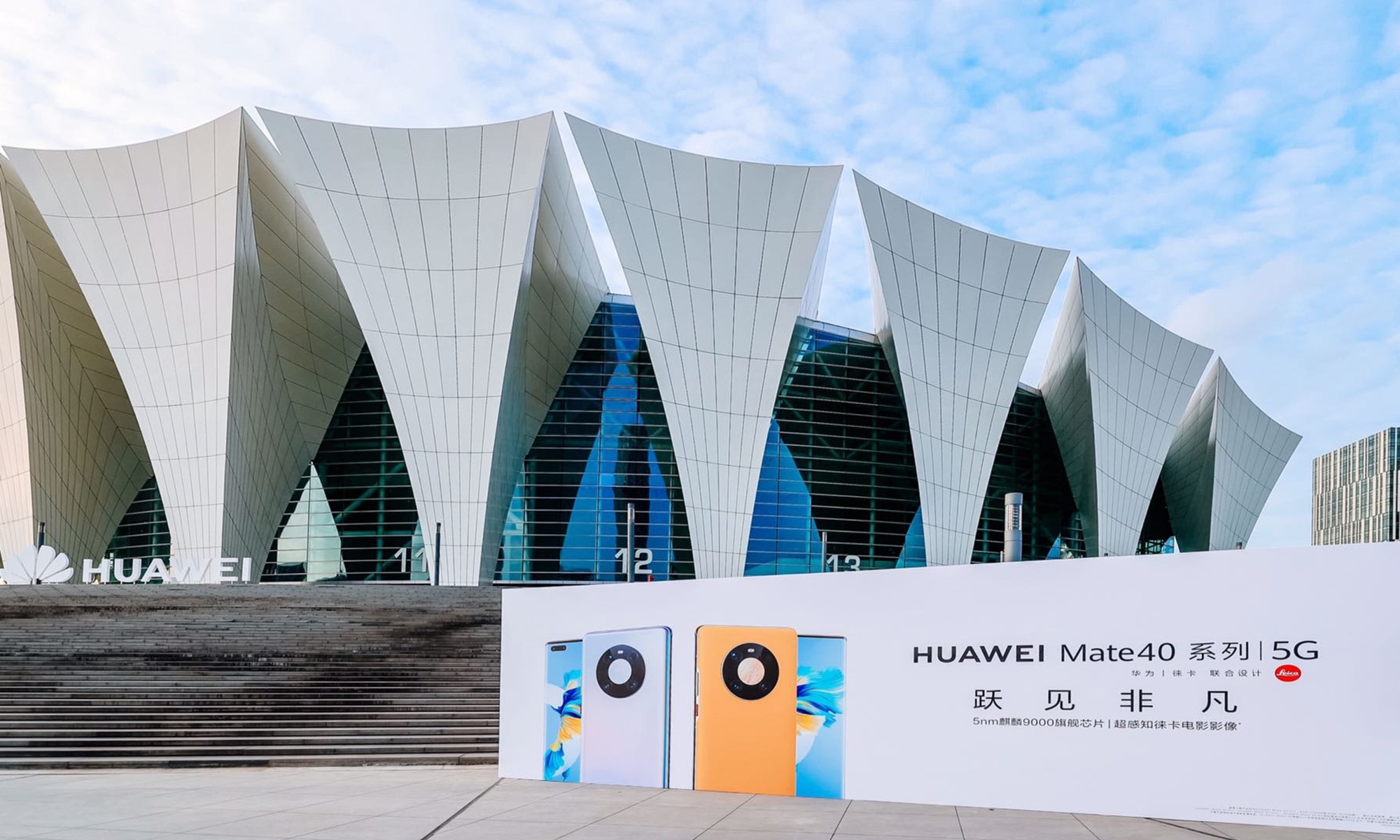 A launch event for the Huawei Mate 40 series in Shanghai on Friday (Photo: Courtesy of Huawei)

Such enthusiasm also shows the firm support of the Chinese public for the domestic high-tech industry when it encounters a rival like the US, and the yearlong crackdown also made many understand the importance of homegrown technologies, experts said.

In addition to releasing the performance parameters of the latest series, Yu also told a story about what inspired the yellow color design of the Huawei Mate 40, as designers referred to it as populus euphratica, which is a salt-tolerant plant species found in the most inhospitable deserts.

Most of them are found in western deserts of China, and Chinese people also take them as a symbol of Chinese spirit, or spirit of populus euphratica, being persistent and tenacious in the extremely hostile environment.

"It also represents the spirit of the Chinese people, as they never yield to difficulties and always stay strong," Yu said, making a metaphor about Huawei's struggles in light of the US crackdown.

The latest smartphone is also the world's first to support the digital Chinese yuan. Based on its hardware-level security capabilities, the phone has encrypted storage, which enables its use in pilot digital RMB scenarios, as China accelerates its digital currency development.

After Huawei released the Mate 40 series overseas, it has seen online orders exceed the current supply, Yu said, adding that the company has been making every effort to meet the demand.

Huawei also showcased more application scenarios supported by its HarmonyOS including in smart automobile, smart home and sports. For instance, its HarmonyOS is now used in 150 kinds of cars, and the company hopes to install the OS in more than 5 million automobiles by 2021.