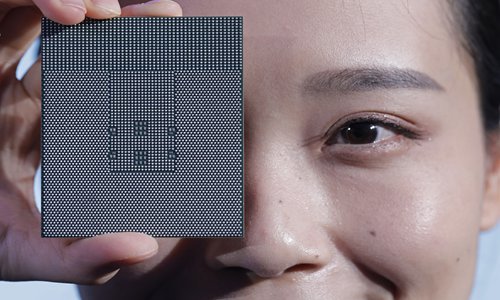 A Kunpeng 920 chip is displayed at an unveiling ceremony in Shenzhen, South China's Guangdong Province on Monday. Chinese telecom giant Huawei unveiled a processor chip for data centers and cloud computing as it expands into an emerging global market. (Photo: AP)

'Keep calm and carry on' could be the best phrase to describe China's Huawei Technologies for the moment, which has been caught in the crosshairs amid the US-China trade frictions. While the US government is trying to block Chinese companies for geopolitical reasons, Huawei, along with other tech firms, stressed the importance of global collaboration, which is also an irreversible industry trend.Huawei Technologies unveiled its latest core chipset central processing unit (CPU) on Monday in a boost for a domestic chip-making industry often interpreted and portrayed as overly dependent on foreign suppliers. The Kunpeng 920 processor, based on the Arm architecture, has the industry's highest performance to meet diverse processing demands, Xu Wenwei or William Xu, board director and chief marketing officer of the company, told a launch event at Huawei's headquarters in Shenzhen, South China's Guangdong Province. The main rival to the core chipset would appear to be the X86, made by US giant Intel Corp. Huawei's cooperation with British chip design firm Arm - owned by Japan's SoftBank Group Corp - challenges Intel's dominance in server CPUs. The industry standard for decades, Intel controls nearly 97 percent of the world CPU market, according to a report by IDC in December 2018, global providers of market intelligence. The timing of the release of the latest core chipset is meaningful, analysts said on Monday.The US government has increasingly been flagging Chinese companies as security threats and explicitly targeting the Made in China 2025 State-led industrial policy that seeks to upgrade the country's high-tech manufacturing. Alongside these long-term geopolitical pressures, the arrest on December 1 in Canada of Huawei Chief Financial Officer Meng Wanzhou, daughter of company founder Ren Zhengfei, has apparently not tempered Huawei's ambitions to catch up on its US tech rivals. Over-reliance Four other tech firms that have also unveiled chips using a 7-nanometer (nm) process - Apple, Qualcomm, Advanced Micro Devices and Xilinx - are all US companies. "Huawei made breakthroughs in using a 7 nm chip, which demonstrated its research and development capabilities," Li Dan, an analyst at Beijing-based CCID Consulting, said. Kunpeng 920 represents a step forward toward self-sufficiency in the Chinese chip-making industry and would reduce dependence on foreign suppliers such as Intel and Nvidia, Li noted. The ZTE crisis has been widely seen as Sputnik moment for China's chip-making industry in 2018, and academics had deep reflection on the matter.After the US government barred US companies from exporting core components to ZTE Corp saying the Chinese company had violated US export control regulations, the ban led to the near-collapse of the Shenzhen-based company: about 30-40 percent of its components were imported from the US. An American extradition request to Canada led to the detention of Huawei's Meng for reportedly violating Iran sanctions, prompting concerns about the Chinese company. "To some extent, it [Huawei] unveiled this core chipset to ease the concerns of some of its customers," said Liu Kun, a veteran industry analyst. "The Chinese company is trying to tell the outside world that there is no need to be afraid of a possible US crackdown, and it is capable of ensuring the supply of its servers and equipment," he told the Global Times on Monday.

Collaboration future Although Huawei chose Arm architecture to develop its CPU chipset, the Chinese company stressed its strategy would remain to seek out multiple suppliers while valuing its long-term partnership with Intel. "Going forward, we expect, and we believe that the Arm ecosystem will continue to contribute to innovation," Allen Wu, executive chairman and CEO of Arm China, said at the event on Monday. While Arm lags behind its major rival Intel, a tie-up with Huawei will also help the UK firm catch up by implementing its chipsets in more scenarios, analysts noted. "Many domestic data centers in China are now considering purchasing Huawei's servers and products, which will also help the UK-based firm to continuously improve its performance," Liu said. Facing concerns over whether US-China tensions might fragment the global tech industry, Huawei's leadership also stressed the importance of global collaboration as an irreversible industrial trend. Xu said the industry has already reached a consensus on an open and shared community to help advance technological breakthroughs."In the high technology sector, global collaboration is always a must," Xu told the audience.