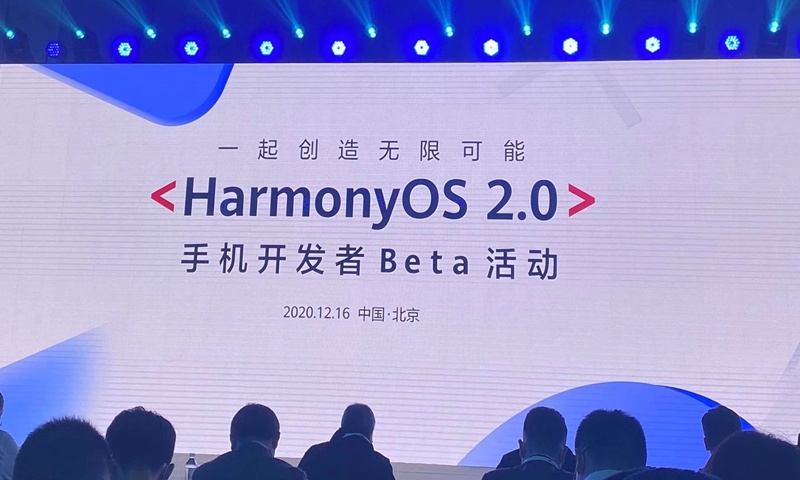 Launch event of the HarmonyOS 2.0 for smartphones in Beijing on Wednesday. Photo: Shen Weiduo/GT

Huawei launches the HarmonyOS 2.0 Beta for its smartphones in Beijing on Wednesday, another step closer for phasing in an alternative for Google's Android operating system, which is also deemed a hedge against US government crackdown on the top Chinese technology company.

This is another major move after Huawei unveiled the HarmonyOS 2.0, its self-developed operating system, at the company's Developer's Conference 2020 in September this year. It's also the first time for the HarmonyOS to run on a smartphone.

Wang Chenglu, president of Huawei's Consumer Business Software Department, said during the launch event on Wednesday that the HarmonyOS is "a key to opening the era of Internet of Things (IoT)," which is expected to bring "disruptive experiences" for the consumers.

Wang said that the mobile operation system can resolve the "pain point" in current internet development in the country, facilitating smoother interaction among more devices - from smartphones, tablets, cars, home appliances to watches or even robots.

Currently, Huawei's smart TV screen products and some home appliance products installed with HarmonyOS are available to Chinese consumers in the market, and some Android apps are also compatible with the HarmonyOS.

"Smartphones, as well as Huawei tablets will be equipped with the HarmoneyOS starting next year," a Huawei employee told the Global Times at the launch event on Wednesday.

Based on current progress, Huawei will upgrade the Harmony system to all Huawei's self-developed electronic devices in 2021, while consumers do not need to purchase new models or hardware to experience the new operating system, Yang Haisong, vice president of software for Huawei's consumer business group, told a group of reporters on Wednesday.

The software rollout is now focused on China market, but analysts believe Huawei will push its proprietary mobile operating system to overseas markets in the near future, to help capture its lost smartphone shares abroad.

Nevertheless, as an OS that was born in response to a supply ban imposed by the Trump administration, many believe that Harmony is still in its infancy that has some "loopholes" to be fixed, and it remains to be seen when a mature HarmonyOS eco-system could be set up that attracts more developers.

In the future, HarmonyOS will be an open source operating system applicable for more devices, Huawei stated, adding that it will continue to hold developer days in Shanghai, Guangzhou and other places to discuss HarmonyOS development technologies and application cases with software developers.

HarmonyOS was first revealed in August last year, a few months after the US put Huawei on their Entity List trade blacklist, which cut it off from Google's software and microchips made with any US technology..

"Despite its rapid development, I still see HarmonyOS as a 'spare tire' rather than an operating system that's ready to replace Android, especially as there are signs of a relaxed ban for Huawei during the incoming Biden administration," Ma Jihua, a veteran industry insider and close follower of Huawei, told the Global Times on Wednesday.

The arrival of the 5G ultrafast connection era, means not only Huawei, but also Apple and Google are all ramping up efforts to upgrade current operating systems and adapt to the new era, Ma said.

Aided by China's vast consumers, a benign testing environment, as well as rapid deployment of the 5G networks, it might provide an opportunity for the Chinese tech giant to build HarmonyOS into the world's third largest mobile ecosystem, after Apple's iOS and Google's Android, Ma said.