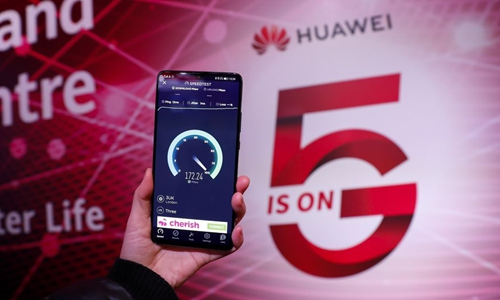 A staff member tests the speed with a Huawei 5G mobile phone at Huawei 5G Innovation and Experience Center in London, Britain, on Jan. 28, 2020. (Photo: Xinhua)

Huawei on Thursday announced the opening of a wireless product manufacturing plant in France which will produce mainly for the European market.

Analysts believe Huawei's efforts to construct a new factory will help build its brand image in Europe, contribute to the local economy and create more jobs.

The new plant, which is designed to be a highly automated intelligent manufacturing plant, will focus on the production of 4G and 5G wireless communications equipment, according to a document Huawei sent to the Global Times on Friday.

"The new plant in France could contribute to local economic growth and create jobs. This will further help Huawei establish its brand image in France and Europe," Xiang Ligang, a telecoms industry expert, told the Global Times on Friday.

The project is expected to generate 1 billion euros ($1.1 billion) in annual output and directly create 500 jobs, according to Huawei.

The Chinese company also announced the opening of its sixth research and development (R&D) center in France at the beginning of February.

"France is one of the most important countries for Huawei in improving its European layout, with the leading population and economic level in Europe. Products are made in Europe and employees are also European, which can reduce users' concerns about the safety of Huawei products," said Xiang.

As a global company, Huawei insists on allocating resources on a global scale and providing customers with high-quality products.

France is one of the world's high-end manufacturing centers, with mature industrial infrastructure, a superior geographical location and a high-quality labor force, said Huawei. Huawei hopes to integrate the country’s capability into the firm’s overall value chain in Europe, improving the punctuality and reliability of customer delivery in Europe.

Huawei has been in Europe for 20 years, employing more than 12,000 people and directly or indirectly creating nearly 170,000 jobs.