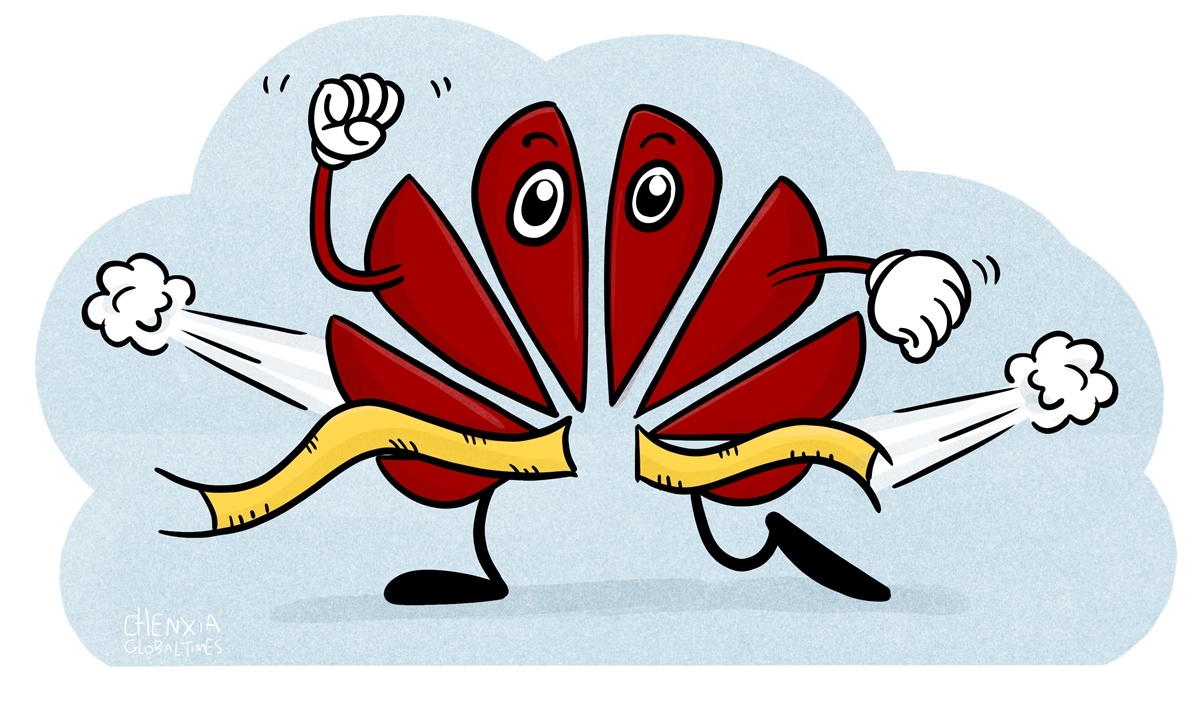 Huawei's forced business transformation, ironic in the eyes of many Western industrial analysts, is instrumental to enhancing the global competitiveness of Chinese companies, while make itself even more a formidable ICT hardware and software technology colossal, enabling it to stand shoulder-to-shoulder with Google, Apple, Microsoft and other global technology leaders.

Armed with Huawei's state-of-the art integrated digital solutions - borne from the company's advanced 5G, cloud and AI technologies, Chinese businesses across a wide spectrum of industrial lines are poised to gain in the level of technology upgrade, corporate governing efficiency and business profitability.

Huawei has worked out a plan to make new inroads into expanding its enterprise business sector, in addition to its mobile telecom gear and consumer devices business, and the enterprise business helped the company win more than 100 billion ($15 billion) of business revenue in 2020, growing 23 percent from 2019. At the end of 2020, the company had over 30,000 corporate partners in China. And, more than 19,000 other partners have joined Huawei Cloud Partners program.

It is believed that a thriving technology ecosystem centered on Huawei's smart solutions will thrust many Chinese businesses to a new level of modernization, which will enable them to better compete with rivals from the US and other developed economies.

At a time when US President Joe Biden refuses to abandon his predecessor Donald Trump's notorious trade and technology war, obsessively chanting his slogan to engage in a "fierce competition" with China, the strategy switch of Huawei and other leading tech companies in China is expected to keep in lockstep with the Chinese central government's new pivot to the "Dual Circulation" economic growth, by focusing on domestic market expansion, and, at the same time supplemented with exploration of overseas markets.

The former Trump administration, concerned about the rising capability of Huawei, imposed very strict restrictions on the company by putting it on US government's Entity List in middle 2019, banning export of all advanced semiconductor chips and other technologies to Huawei.

In 2020, Huawei was forced to spin off the Honor phone business, and the production of other advanced Huawei smart phones, tablets and digital devices was largely impaired, leading to withering sales and market shares both at home and abroad.

But the technology giant won't cower to the US' reckless crackdown.

Realizing the world's leading semiconductor makers are forbidden by Washington to manufacture semiconductor chips for the company, Huawei decided to shift to explore new frontiers of technology. Thanks to its strong financial fundamentals, Huawei has invested heavily in recruiting thousands of talented people, who are driving new technology innovations.

And, the company's efforts have led to "pops" in new technologies, which will help Huawei to garner streams of new revenues in the coming months and years.

Lately, Huawei has officially launched its Harmony or Hongmeng operating system which is expected to be embedded with more than 300 million digital consumer devices in 2021, mostly in China's mainland market. The integrated software system, connecting smart phones, laptops, tablets, smart TV sets, other home appliances and the inner-car screens and more, is innovated for the upcoming new era of "Internet of Things (IOT)".

Also, Huawei, seeing the opportunity in autonomous driving and carbon-free electric vehicle industry in the world, has jumped to the bandwagon of developing intelligent car-driving systems.

The electric car named "ARCFOX", printed with Huawei Inside (HI) logo, were shown running smoothly and autonomously on downtown Shanghai streets. The system consists of a computing system, 4D imaging radar, an autonomous driving platform and intelligent thermal management. It runs on Huawei's Harmony OS and high-quality lidar chips, and has its proprietary 5G connectivity.

The self-driving HI system developed by Huawei's intelligent car unit, which has over 5,000 scientists and technicians and plans to invest $1 billion annually in R&D, is now a hit among Chinese car lovers. The driving system will help Huawei capitalize on China's exploding EV market. As the world's top electric vehicle market, China is forecasted to see annual EV sales of 6-7 million vehicles in 2025.

The company has already signed with 18 carmakers to form a so-called "5G Automotive Ecosystem" in China. As a supplier, rather than a competitor, Huawei can access a variety of carmakers for partnerships in using its smart driving technology.

As Huawei has constantly made breakthroughs in new technology fronts and entered a broad alignment with many Chinese businesses, the tech giant will naturally have access to new larger streams of revenues. Huawei reaped in a quarterly profit of 16.9 billion yuan in the first three months of 2021, which grew 26 percent from the corresponding period last year - a vindication of Huawei's technology prowess and ability to make profits and outshine its competitors, despite US government's constant and merciless attack.