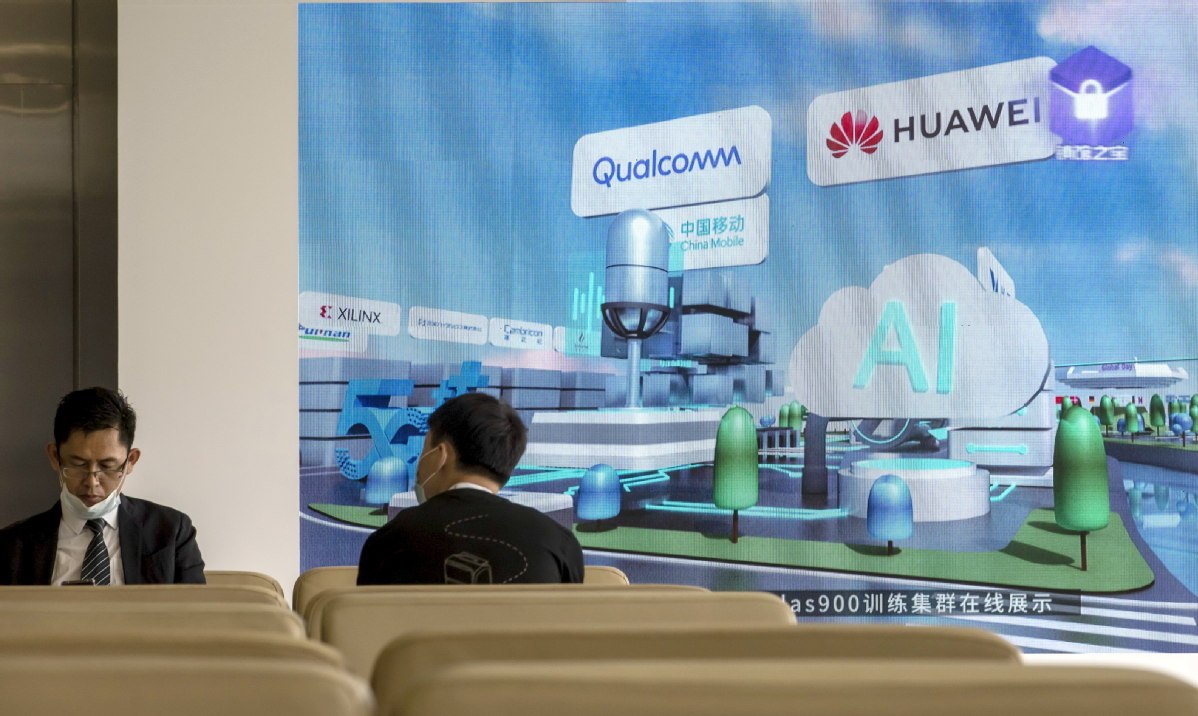 Visitors sit in front of a screen displaying the logos of Qualcomm Inc and Huawei Technologies Co at the recent World AI Conference in Shanghai. (Photo: Agencies)

The new agreement is likely to pave the way for the US company to supply 5G semiconductors to Huawei in the future despite the current US restrictions, said experts.

Huawei will pay Qualcomm $1.8 billion for back royalties owed for 2019 and for the first six months of this year under the new global patent license agreement. The new deal also includes a cross license granting back rights to certain Huawei patents, covering sales beginning Jan 1, Qualcomm said.

While Huawei is still barred from buying Qualcomm chips under US regulations, it has now resumed paying licensing fees for wireless technology, Qualcomm said.

Jia Mo, an analyst at market research company Canalys, said the latest US semiconductor curbs unveiled in May are specifically designed to contain Huawei's chip-designing capabilities, and they did not restrict Huawei from buying chips designed by other companies.

"If Huawei can purchase chips from Qualcomm in the future, the US company can rake in more money, and the US government is likely to approve it," Jia said.

"For Huawei, the more potential options it has, the smaller its risks will be in the future. As a result, it is important for the Chinese company to maintain good relations with Qualcomm so as to reduce future risks," Jia said. But he also warned that due to the unstable geopolitical environment, changes appear possible in the future.

The US government put Huawei in an "Entity List" in May 2019 which required US firms to obtain a license to export domestically produced chips and software.

In May this year, Washington expanded these rules by requiring contract chip producers anywhere in the world that use US semiconductor equipment and technology to obtain its approval before producing chips designed by Huawei's subsidiary HiSilicon.

An analyst from a domestic securities company said the new agreement paves the way for Qualcomm to supply its high-end chips to Huawei, if Washington approves such an arrangement in the future.

The move comes close on the heels of a new industry report that Huawei had displaced Samsung as the world's largest smartphone vendor in the second quarter of this year in terms of shipments.

It was the first quarter in nine years that a company other than Samsung or Apple has led the market, according to data from market research company Canalys.

During the quarter, Huawei shipped 55.8 million devices, down 5 percent on a yearly basis, while the second-placed Samsung saw shipments fall by over 30 percent to 53.7 million units on a yearly basis.

Canalys said Huawei is still subject to US government restrictions, which have affected its business outside of the Chinese mainland. Its overseas shipments fell by 27 percent from April to June. However, the company continued to dominate its domestic market and boosted its Chinese shipments by 8 percent in the second quarter. Huawei currently sells over 70 percent of its smartphones in the Chinese mainland.