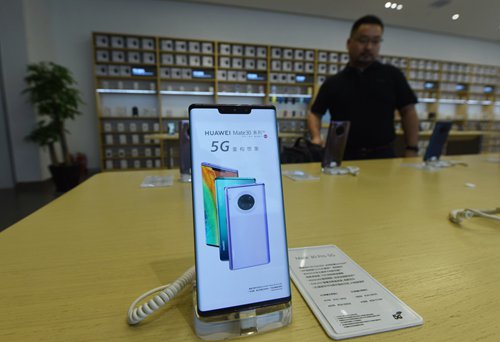 Though China-US trade consultations are heading in a positive direction, Huawei remains in limbo as US politicians again toughened their rhetoric against the Chinese high-tech company.

Five months after the US blacklisted it for security concerns, Huawei, the world's largest telecoms equipment vendor, has been struggling to strive and reach out to the world, especially in major 5G markets outside of China.

While China and the US have made substantial progress in the latest round of trade talks, which have also lifted market sentiment, uncertainties still linger around specific issues like Huawei - a major bargaining chip amid the escalating trade war, particularly after officials in Washington have stuck to their stance against the Chinese tech firm.

In a recent speech at the Wilson Center, US Vice President Mike Pence said that in order to protect intellectual property rights and the privacy of American citizens and US national security, the US government has taken steps to curtail the illegal behaviors of Chinese companies like Huawei and ZTE.

Pence also urged US allies to build secure 5G networks that "don't give Beijing control of our most sensitive infrastructure and data as well."

After Brad Smith, president of Microsoft, spoke up for Huawei in an interview with Bloomberg Businessweek by claiming the Trump administration treated it unfairly, US senators, including Marco Rubio and Tom Cotton, sent a letter to Smith earlier this month on so-called evidence of a threat the Chinese firm poses to national security.

2019 is widely seen as a struggling and challenging year for Huawei, which is the largest supplier of 5G networks in the world. More countries have begun to reject calls from the US, especially in Europe, its second-largest market outside China.

After Germany resisted pressure from Washington and allowed Huawei to build 5G networks, the UK became the next major power in Europe to embrace Huawei. British Prime Minister Boris Johnson is preparing to grant access to the UK's future 5G telecoms network, media reported over the weekend.

The UK decision would be "incredibly helpful" to Huawei after the company experienced a tough year under the US crackdown, which would send out a clear signal to other countries that still hold a "wait-and-see" attitude on Huawei amid political headwinds, a London-based analyst who preferred not to be identified, told the Global Times on Monday.

Compared to earlier this year when US Secretary of State Mike Pompeo lobbied around in EU and warned European countries against Huawei equipment, the Chinese company has now overcome difficulties and regained trust by providing non-alternative 5G technologies.

Today, major revenues of Huawei come from China and Europe - two key 5G markets. The firm has won more than 60 contracts worldwide, about half of which from Europe, according to the company's latest data.

Some senior Huawei executives in Europe said they feel grateful for US President Trump, as the ban actually advertises the company to the world. "Under crisis consciousness, we've been working harder, sometimes even nonstop, to meet our goal. And the result is not bad so far," a representative of the Huawei Europe office told the Global Times. He preferred not to be named as it was a private conversation.

At a recent telecoms industry event in Switzerland, Huawei's 5G technologies were praised by foreign carriers such as Swiss carrier Sunrise, Spanish firm Telefonica and UK's Vodafone. To tap into more innovative scenarios for implementing 5G technologies, Huawei has also launched innovation centers in countries like Switzerland and Italy, reflecting its long-term commitment to the European market.

"If they [foreign carriers] could find alternatives to Huawei's products, they would have done so already," Jiang Junmu, a veteran industry observer at telecom industry news website c114.com.cn, told the Global Times on Monday.

After the EU-wide risk assessment of 5G networks was completed, which had not specifically targeted Huawei, countries could clearly show their open attitude toward products of the Chinese company as part of their own interests, Jiang noted.

EU released a 5G risk assessment report on October 9, which did not specifically target Huawei for vulnerabilities in the networks. The report, analysts believe, gives further instructions to member states when it comes to choose suppliers for 5G network rollouts.

"Huawei has been supplying access network kits to European fixed and mobile networks for over 15 years. If there were backdoors, they would have been uncovered by now," Kevin Curran, a professor at Ulster University, told the Global Times at a recent interview.

Germany, as a major force inside the EU, will play a positive role when it comes to other European countries' stance on Huawei in their 5G construction. Other European countries such as France, Italy and Spain are unlikely to bar the Chinese firm from building 5G networks in the future, analysts said.

"Carriers in Europe have no other option in 5G network building when they exclude Huawei, as a blind ban would cause years of delay in the development of next generation wireless technologies," Jiang said.

Huawei founder Ren Zhengfei said he appreciates the tremendous opportunities that Europe and other parts of the world have given to his firm despite the US ban, and the company has already set up 5G base stations without US components, according to a panel discussion in September.

Its innovative 5G solution Massive MIMO, which leverages a 5G carrier's high bandwidth and overcomes the coverage limitations of C-band, is also considered a major breakthrough as it was the first one in the industry to support large-scale deployment, Huawei said. And carriers in Europe such as Vodafone, Deutsche Telekom have conducted trials in recent months.

Although Washington offered a temporary reprieve after Huawei was added to the US Entity List, and allowed them to work with the Chinese firm until August, that reprieve was extended to November, but the suppression of Huawei has already failed, analysts said.