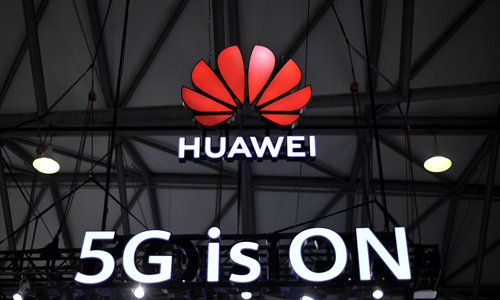 A view of a "5G is On" banner above Huawei's booth at the MWC19 in East China's Shanghai Municipality on June 27. (Photo: IC)

Chinese technology giant Huawei is scheduled to release its first-half financial statements on Tuesday, and both domestic and foreign analysts have estimated a 30 percent increase in revenue through US government has placed the company on a blacklist.

Fu Liang, a Beijing-based independent industry analyst, told the Global Times on Monday that the company has "an abundant business operation system, which could help it to diversify its risks and obtain continuous revenue growth."

Revenue growth was mainly supported by Huawei's strongly expanded consumer business, especially in China, which was not affected by the US ban, Fu noted.

According to the Xinhua News Agency, Huawei's core business used to be its mobile network business, which meant selling gear to mobile carriers, but in recent years its consumer businesses -- selling smartphones and other devices -- directly to the general public expanded strongly.

In 2018, the company's consumer business sales grew 45.1 percent year-on-year, accounting for almost half of the company's total revenue.

Huawei itself has hinted at a promising performance. The company on Monday said on its WeChat account that the data is all ready for the upcoming release and the public could pay attention.

The light-hearted notice also described its financial management system. Its global financing control center can settle accounts for its hundreds of subsidiaries each day and has achieved real-time visibility of global accounting with a traceable process.

According to Xinhua on Thursday, Huawei's press conference on Tuesday will have the theme "Resilience: Huawei Maintains Robust Operations in the First Half of 2019."

As a global telecom giant, Huawei's development has drawn wide attention. The US imposed export controls over Huawei, banning it from purchasing technology or parts from US companies, citing so-called national security reasons.

Ren Zhengfei, founder and CEO of Huawei, has played down the impact of US sanctions in recent interviews. He estimated that the company's overall yearly revenue will decline by about $30 billion, which is not a big deal.

"Huawei saw the risk of technological reliance on few entities, especially when ZTE was hit by a US crackdown, and it started to prepare," Fu said.

The company built up inventories in case of possible supply cut-offs and stepped up efforts to improve its technology independence and expand its supply chain, Fu noted.

Besides, Huawei has taken the leading position in 5G technology, which could bring the company enormous growth in the future, even though it takes years of investment.

In terms of long-term development, Huawei on July 23 announced an investment of 3 billion yuan ($436 million) in the next five years on its ARM-based server CPU Kunpeng to enrich its own ecosystem, and on Sunday joined hands with Xiamen, East China' Fujian Province to establish a Kunpeng industrial ecosystem base and supercomputing center.

Xin Haiguang, a Beijing-based IT industry analyst, told the Global Times that the ecosystem could enhance its enterprise business sector because it could offer advances data services for different industries. The services include big data platforms and cloud services.