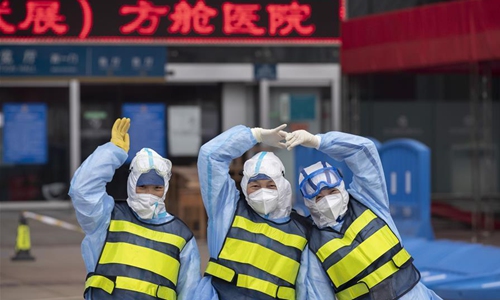 Companies and institutions in Central China's Hubei Province are preparing to resume business operation as the province is expected to end lockdown of most of its cities other than the epicenter Wuhan.

Hubei, which previously ordered companies not to resume production before Wednesday, rolled out a color-coded health rating for individuals in the province on Tuesday, encouraging people with low health risks to return to their jobs, as the province has seen a considerable easing of the viral outbreak.

Some companies including international airports and auto producers have started to prepare to restart.

Wuhan Tianhe International Airport has also started to prepare for reopening, though the exact date has not been revealed yet.

Zhang Tao, a delivery worker in Wuhan, told the Global Times that the number of packages has been increasing in recent days and he delivers about 170 pieces per day. "It is too busy to even have one day off  now," he said.

Meanwhile, concerns about the difficulties of fully resuming production in the short term linger, as the province is still under a lockdown situation.

Yang Tonglei, a manager with Hubei Chenyuan Auto Parts Co, a supplier of Dongfeng Motor in Hubei's high-risk area Shiyan, told the Global Times that the plant will file documents for the record on March 25 when manufacturing will gradually recover.

"We can't survive any longer if production doesn't restart," Yang said, adding that his company had lost orders and clients while stockpiles are high.

"There is no doubt that factories and companies in Wuhan can't resume normal production on Wednesday, as counties that are less hit haven't revoked lockdowns yet," Li Chuan, a manager at Wuhan Land Electronic Co, a high-tech enterprise specializing in the development and production of battery test equipment, told the Global Times.

Li said the fallout from the coronavirus is the loss of clients, rather than delayed production, because clients resorted to other suppliers outside the province as Hubei's logistics are largely in a lockdown. He said the company's inventory is higher than usual, but declined to be specific.

The company's administrative employees have been working at home since February 1, but on-site workers can't return to their posts until March 15-20, Li said.

On the premise of sufficient prevention measures, companies are encouraged to return to operation in an orderly and safe manner, to hedge the epidemic's impact on the economy, Ying Yong, Communist Party chief of Hubei Province, stressed on Monday.

The city of Qianjiang in Hubei announced on Tuesday that it has decided to lift transport restrictions and resume industrial production and normal activity.