Hubei on way to economic resurgence 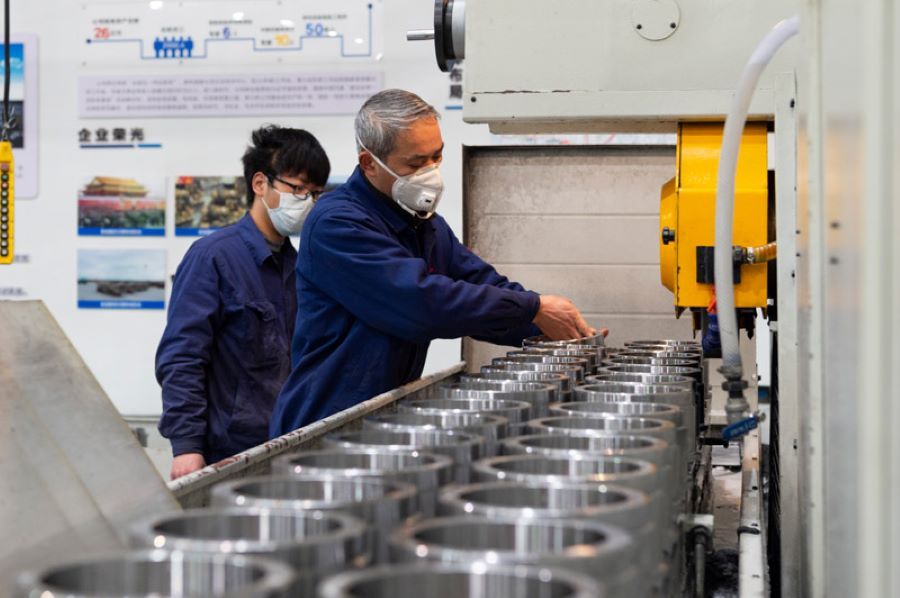 Ever since the novel coronavirus outbreak hit Wuhan, Hubei province, Hu Yan and her colleagues have been extremely busy. They have been working round the clock to produce medical supplies including protective gowns, medical caps and N95 surgical masks.

Hu is the special assistant to the chairman of Crown Name Disposable Hygiene Products Fty Ltd, a Wuhan-based medical supplies manufacturer. From Jan 20 to May 7, the company's production capacity of protective clothing increased from 3,000 pieces to over 80,000 pieces per day, even higher than the level before the epidemic outbreak.

Hu said that when the epidemic worsened in Wuhan during Spring Festival (Jan 24－Feb 2), most of the company's employees were on vacation and there were only around 30 people on duty in the factory. To meet the region's urgent need for medical supplies, the company immediately took action and mobilized workers to produce protective clothing. Within around six weeks, workers at the factory surged from around 30 to 880.

"In March, daily use of protective suits in Hubei was around 120,000 pieces, among which 80,000 pieces went to local medical staff and the rest were for assisting medical professionals from other regions of the country. Our company took the responsibility to provide roughly 40,000 pieces," said Li Sen, chairman of Crown Name.

"Amid the unprecedented virus outbreak and skyrocketing demand for protective clothing, we took steps to increase production capacity as much as possible while strictly ensuring product quality. We even raised product quality standards by one level," Li said.

Since March 20, the epidemic situation has improved remarkably in Wuhan and Hubei province, but conditions overseas have worsened considerably. Crown Name switched its focus from domestic to foreign demand and ramped up efforts to offer medical materials to overseas markets.

Within 10 days, the company received foreign orders worth $90 million from Europe, the United States, Australia and elsewhere.

"While ensuring domestic supplies, most of our products are now for export," said Li Qing, general manager of Crown Name.

Crown Name currently has more than 2,000 employees, which is higher than the level before the epidemic broke out. Its production capacity for protective clothing has surpassed 80,000 pieces a day, and most of the products are now exported overseas.

Data from the Hubei epidemic prevention and control command center showed that between March 11 and April 30, based on market activity and resumption of sales, Hubei's production recovery index reached 80.59 percent.

By May 1, the worker return rate of the province's ongoing construction projects valued at or above 100 million yuan ($14 million) was 94.4 percent, and the figure of Wuhan specifically was 76.8 percent.

The Department of Economy and Information Technology of Hubei Province said the provincial government has been guiding and promoting orderly production resumption of industrial enterprises across the province since March 15. By April 17, the resumption rate of Hubei's industrial enterprises above a designated size－with an annual revenue of 20 million yuan or above－reached 98.2 percent, and 93 percent of employees at these enterprises were back to work.

Meng Chunlin, deputy director of the department, said: "Generally speaking, the production resumption rate of industrial enterprises above a designated size in Hubei is close to the national average level."

Industrial enterprises that are related to healthcare, energy, daily necessities and agricultural production have witnessed a significant growth in their production resumption rate, said the department.

"The problems are especially obvious among micro, small and medium-sized enterprises, whose overall production resumption rate has not yet reached 80 percent. For some enterprises, although workers have returned and operations resumed, production capacity has not recovered to normal levels," he said.

Liu Weijun, head of the department's SME development division, said the Hubei government has issued a series of favorable policies to support the production resumption of SMEs, including reducing or exempting taxes of the enterprises and lowering loan lending rates.