BUSINESS Hubei plans to invest $203b to further green efforts

Hubei plans to invest $203b to further green efforts 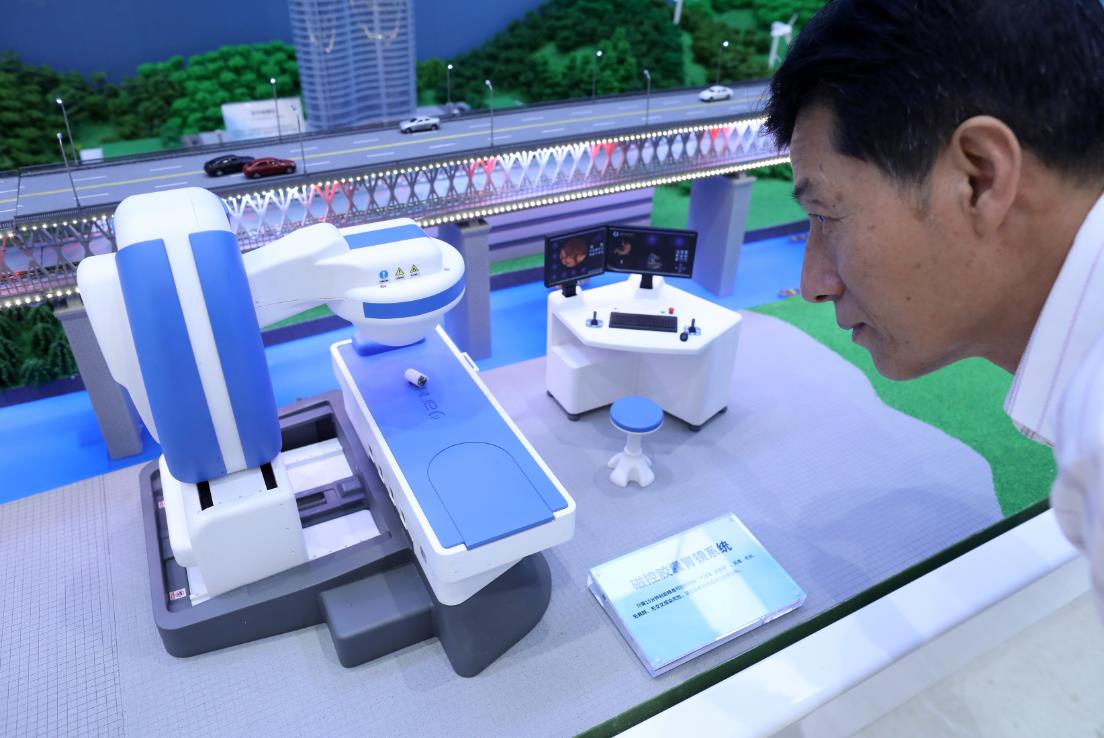 A visitor looks at a capsule gastroscope developed by a Hubei firm during an exhibition in Beijing showcasing economic achievements of the province on Wednesday. (Photo: China Daily)

Central China's Hubei province plans to invest a total of 1.3 trillion yuan ($203 billion) in 91 major projects in an effort to pursue green development and sustainable development, the province's Party secretary said on Wednesday.

Jiang Chaoliang, secretary of the Hubei Provincial Committee of the Communist Party of China, said at a media conference in Beijing that the province will explore a development path to take advantage of its natural resources as a driving force for Hubei's economy.

The province will speed up the conversion of old and new energy, boost the development of 10 major industries such as integrated circuits, and promote the industrial technology reform of enterprises to achieve green and sustainable development.

"We plan to invest more than 500 billion yuan in industrial technology reform," he said.

In recent years, green development has been Hubei's priority. Jiang said since it is the only province with 1,000-plus kilometers of the Yangtze River, Hubei had taken numerous steps to protect the river.

Currently, 86 percent of the water samples from the Yangtze have been rated good quality in national water testing. Several of the 115 chemical plants within 1 km of the river have been shut down, overhauled, relocated or shifted to other production, effectively improving what used to be the chemical plant-plagued Yangtze River.

"We have put an end to 1,211 illegal wharves. A total of 181 sewage overflow outlets into the river have been closed or channeled into sewage disposal plants," Jiang said.

The cleanup has led to growth. Data from the State Council Information Office showed that in 2018, Hubei's gross domestic product reached 3.94 trillion yuan, 215 times more than the 2.45 billion yuan in comparable prices in 1952. The national ranking of the regional GDP has been at seventh place since 2016.

Between 1979 and 2018, Hubei's GDP grew progressively by 10.5 percent annually on average after the reform and opening-up policy was launched. The per capita GDP of Hubei is 66,616 yuan, which was 98 times more than the 90 yuan posted in 1952. Local general public budgetary revenue and the retail sales of consumer goods totaled 330.7 billion yuan and 1.83 trillion yuan respectively.

Wang Xiaodong, governor of Hubei province, noted that "the GDP growth rate of Hubei in 2018 was 7.8 percent, ending the slowdown in economic growth seen in the last seven years. In the first quarter, the growth rate was 8.1 percent".

"From January to May, major economic indexes of Hubei surpassed that of the national level. Total social investment in fixed assets surged by 10.7 percent year-on-year, while the growth rates of the retail sales of consumer goods and trade volume reached 4 percent and 16.8 percent respectively," Wang added.

Apart from green development, technological innovation is another driving force of Hubei's economy.

The State Council Information Office said that in 2018, patent application and patent grantings in Hubei numbered 129,820 and 64,106 respectively, and technology transfer contracts totaled 123.72 billion yuan in value, ranking fourth across the country and being 4.3 times more than in 2012.

In 2018, a total of 6,597 high-tech enterprises across the province secured an added value of 665.31 billion yuan, 92 times more than that of 1996. There were 12 national high-tech zones, the number of which ranked fourth nationwide and first in Central China.

Wang added that "in recent years, Hubei invested 10 billion yuan into building major scientific platforms and another 10 billion yuan into supporting universities and research institutes. We see talent as the primary resource and innovation as the primary driving force. In the future, Hubei will continue to cultivate more scientists, entrepreneurs and investors to boost the province's scientific innovation undertakings."