BUSINESS Hydrogen use booms in China amid carbon neutrality push

Hydrogen use booms in China amid carbon neutrality push 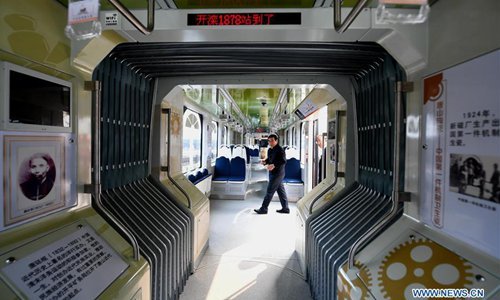 A passenger gets on a tram powered by hydrogen fuel cells in Tangshan, north China's Hebei Province, Oct. 27, 2017. (Xinhua/Wang Xiao)

More than three domestic and foreign energy giants have announced they will keep loading up hydrogen, the energy carrier essential to achieve the target of China's carbon neutrality.

China Petrochemical Corp (Sinopec) is speeding up the upgrade of refueling stations, integrated with refined petroleum products, hydrogen as well as LNG, Zhang Yuzhuo, chairman of Sinopec, said at an industry conference Thursday, adding that Sinopec is loading hydrogen on "a large scale."

Sinopec will produce hydrogen from sources based on its refineries in the short run, and then produce the clean energy carriers from renewable sources, said Zhang.

Transition in many of its over 30,000 gas stations is not enough. Sinopec has also taken substantial steps in geothermal, offshore wind power, and photovoltaic power generation, said Zhang.

Zhang noted China strives to achieve the goal of carbon neutrality by 2060, which is technically and economically possible.

Sinopec is not alone. China Huaneng Group announced Tuesday it will build a green hydrogen industrial park in Southwest China's Sichuan Province, which has abundant hydropower resources. This is a demonstration project to produce hydrogen via the electrolysis of water, with the electricity used in the process coming from renewable sources.

The project will be constructed in two phases. Upon completion, it will produce 4,286 tons of hydrogen and 34,286 tons of oxygen per year, according to media reports. In addition, Chengdu, capital city of Sichuan, plans to build a comprehensive hydrogen industrial park by 2023, which includes hydrogen production and the manufacturing of hydrogen-powered vehicles and trams, to become a nationally high-end equipment manufacturing base in the hydrogen industry, according to a guideline released last year.

This is Shell's first commercial project in China's hydrogen sector, with businesses including production, storage, transportation and refueling. The project includes a green hydrogen plant and three hydrogen refueling stations with a total investment of about 580 million yuan ($88.2 million).

The project will annually produce 3,000 tons of green hydrogen through electrolysis from Zhangjiakou's rich renewable electricity in the first phase, which can meet the demand for more than 400 hydrogen fuel cell buses.

The three projects demonstrate China's efforts to proactively promote clean energy transition. The deployment of hydrogen is a significant step to achieve the target of carbon neutrality, experts said.

Hydrogen and nuclear power can help China to achieve the target in the long run, Guan Dabo, a noted professor of Climate Change Economics at Tsinghua University and a fellow of the UK's Academy of Social Sciences, told the Global Times. He also noted that keeping global warming within 1.5 ℃ requires joint efforts of citizens and authorities, as well as developed countries and developing countries.

On the other hand, fossil fuels are still needed. "At present, it is not realistic to eliminate fossil energy in Asia," Zhang said.