Hyundai is expected to start production of hydrogen vehicles' fuel cell systems in China from late 2022, with the annual capacity to reach 6,500 units, said a senior executive at the South Korean carmaker. 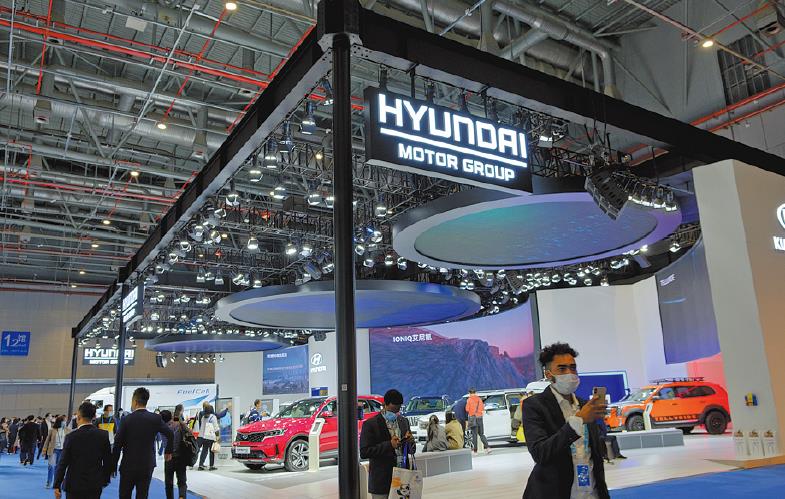 Hyundai displays its product lineup at the third China International Import Expo in Shanghai in 2020. [Photo by Xiao Da/China Daily]

Oh Seung-chan, head of the fuel cell plant in Guangdong province, said in a recent interview that cities including Beijing, Shanghai and Guangzhou in Guangdong are aiming to have around 30,000 fuel cell vehicles on their roads in four years.

This is part of China's ambitious initiative to promote clean energy vehicles. The nation is expected to scale up the ratio of non-fossil fuel vehicles sold in the country to 40 percent by 2030, according to the latest action plan unveiled last week.

Oh said fuel cell systems to be produced at the Guangzhou plant will be used in vehicles from Hyundai and other carmakers as well.

He said the carmaker has been in talks with local Chinese companies in terms of fuel cell systems.

In the Chinese market, Hyundai will first start with hydrogen heavy trucks and then move into passenger vehicles, said Oh.

Hyundai started to develop its first fuel cell vehicle in 1998. It unveiled the Tucson FCEV in 2013. The carmaker launched the NEXO SUV in 2018, and the world's first heavy-duty fuel cell truck, XCIENT Fuel Cell, in 2020.

Representatives at Hyundai China said the company will showcase its latest hydrogen products at this year's China International Import Expo that is scheduled to kick off later this week.

In September, Hyundai said it plans to introduce fuel cell systems into all its commercial vehicle models by 2028 and expects fuel cell vehicles to have price tags similar to battery electric vehicles around 2030.

"We want to offer practical solutions for the sustainable development of humanity and with these breakthroughs, we aim to help foster a worldwide hydrogen society by 2040," said Hyundai Chairman Euisun Chung.

At the same event, it showcased two third-generation fuel cell stacks, which are crucial components of hydrogen vehicles.

The 100kW stack is 30 percent smaller than the previous generation product, while the 200 kW version, which is designed for commercial vehicles, is similar in size to the one used in the NEXO SUV but its power output has doubled.

The carmaker expects them to extend their life cycle by 50 percent to 100 percent compared with the generation launched in 2018, which can work for 5,000 hours and enable vehicles to run for 160,000 kilometers.

Hyundai said the stacks' prices will be slashed as well, saying that they will be the key factor to achieving cost parity of fuel cell vehicles with battery electric cars by 2030.