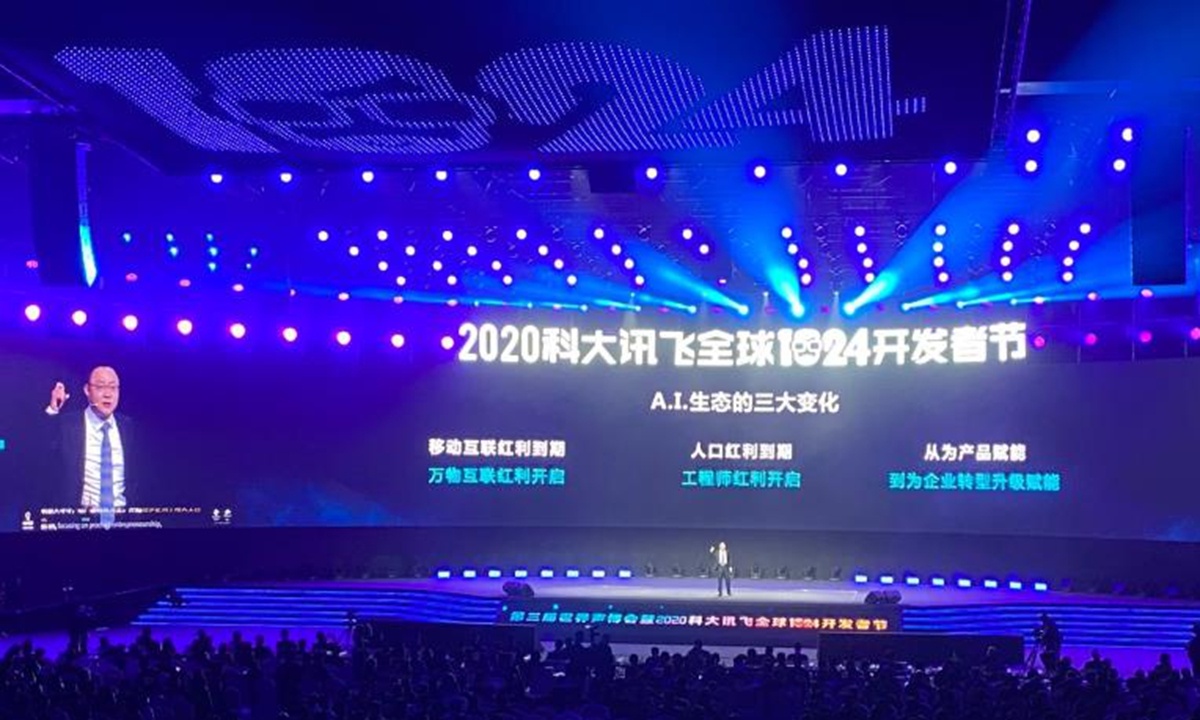 The US-instigated technology war with China has forced homegrown artificial intelligence (AI) firms to focus more on core technological innovation, the founder and chairman of iFlyTek said on Friday, noting that the top Chinese voice recognition firm, underpinned by its indigenous prowess, has largely been unaffected by US blacklisting.

In a passionate speech at iFlyTek’s global developers conference, held at its headquarters in Hefei, East China’s Anhui Province, iFlyTek chairman Liu Qingfeng said that AI is technology-driven and the whole society is paying greater heed to the basic rules of scientific research and core capacities of homemade products, a matter of critical importance for the future of AI in China.

The nation’s unique advantages in identifying AI application scenarios, and its urgent demands to address the weak links concerning people’s livelihood such as education and healthcare provide unprecedented opportunities for the rise of AI, Liu said.

He also cited the coronavirus pandemic that has prompted more people to embrace an era of digital-enabled survival, enhanced legal protection for user privacy and data security, as well as capital market deregulation that has funneled massive funds into original innovation-oriented startups.

“Without AI applications, it would be impossible for us to maintain regular epidemic prevention and control, and production resumption, innovation and entrepreneurship on a regular basis,” Liu commented.

The voice recognition major was among some of the nation’s top AI firms that were added to the US entity list in October 2019. The expanded list included leaders in facial recognition technology - Megvii, SenseTime and YITU - and video surveillance gear maker Hikvision.

iFlyTek’s core technologies are all its proprietary intellectual properties and therefore the blacklisting hasn’t had much of an impact on the firm, Liu told reporters on the sidelines of the event.

As Qualcomm’s communications modules are used in some of iFlyTek’s translation devices and a portion of its vehicle mounted-products use US chips, the Chinese AI firm has stockpiled related components in advance, as the US crackdown on Huawei has domestic high-tech firms staying vigilant. As a result, iFlyTek has delivered a virtuous earnings growth since last year, he went on to say.

Shares of the Shenzhen-listed firm edged up 0.03 percent, while the Shenzhen Component Index shed 2 percent.

Describing the addition to the US entity list as an excuse trumped up for a clampdown on Chinese businesses eyeing overseas expansion, the founder of iFlyTek stressed that Chinese firms’ globalized push would, however, remain unfazed.

Regardless, the firm has fully researched the US legal system and has complied with the US legal framework to avoid greater disputes, according to Liu.

In response to Global Times’ queries on the firm’s R&D spending, Liu said the firm’s R&D investment accounts for roughly 20 percent of its sales revenue per annum, and such momentum is set to continue while the R&D commitments will further focus on core innovations for key strategic and core technologies to be entirely self-made and much more advanced than its global peers.

The Chinese leader in voice recognition technology pledges to open cutting-edge smart speech and AI core technologies to developers from across the globe, as it is eyeing the creation of an ecosystem.

iFlyTek’s global developer population hit 1.57 million as of October, up from 1.08 million in the same month of last year. The number of applications having been developed also rose to 930,000 from 700,000 over the past year, Liu revealed.

The firm’s open platform for mobile internet and intelligent device developers has been updated this year to feature the recognition and synthesis of over 10 languages, according to Hu Guoping, senior vice president of iFlyTek.

Results of an AI developers competition launched by iFlyTek that has attracted the participation of over 9,000 teams were also unveiled Friday.

Among the winning participants are Beijing Alpha Technology, an upstart firm with expertise in AI-powered headhunting, which won third place in the contest for AI applications.

China now attaches more importance to talent development than other countries or regions, and the frequency of changing jobs in China is higher than that in overseas markets, boding well for algorithm iterations at a faster pace, Jiang Miao, general manager of Beijing Alpha Technology, told the Global Times on Friday.