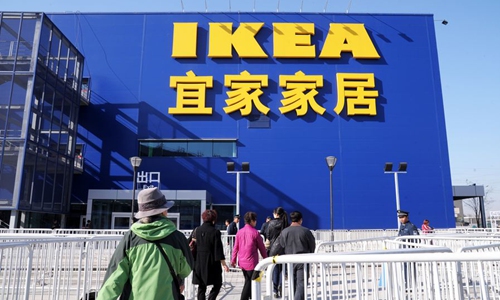 IKEA China firmly condemned and opposed the filming of pornography at its store and has filed a report with local police, the company said on Saturday in a statement responding to pornographic video spreading online.

In the video, a female masturbated on a sofa in an IKEA shopping mall which didn't reveal an exact location. Netizens suspected that the video was filmed in Guangzhou, South China's Guangdong Province as the woman spoke Cantonese during the video.

IKEA China told the Global Times that the case is being investigated and refused to reveal the location of the mall.

The company vowed to provide a healthy shopping experience and environment for consumers with stricter security and sanitation work and called on consumers to shop in a polite and orderly fashion, the statement released on its official Weibo account said.

Chinese netizens supported IKEA's decision on Sina Weibo, saying that IKEA should be a cozy furniture shopping mall but may suffer from a notorious reputation and economic losses caused by the incident.

It wasn't the first time visitors filmed pornographic content at an IKEA shopping mall. In 2016, similar cases occurred at an IKEA mall in Beijing.

In 2015, footage of two people having sex inside a fitting room of a UNIQLO store in Beijing went viral on Chinese social media.

As a result, the man who uploaded the video on social media was accused on suspicion of spreading obscene articles and was kept in detention. Another three people were arrested for spreading obscene materials.

According to China's Provisions on Ecological Governance of Online Information Content which took effect on March 1, a network information content producer shall not make, copy or publish any illegal information containing obscenity and pornography.

Hu Wei, a lawyer at the Beijing-based Globe-Law law firm, told the Global Times that the female in the video may be convicted of the crime of disturbing public order or assembled pruriency which may lead her to face a three-year prison term.

The person who took the footage may be considered an accomplice and whoever uploaded the video online has committed the crime of spreading obscene material, Hu said.

According to China's law on public security administration, whoever shows a nude body intentionally may be detained between five and 10 days if the case is serious.

Zhu Wei, professor and communications researcher at the China University of Political Science and Law, told the Global Times that the social media platform should also assume responsibility as it failed to block such content, and stop the spread of the video.

Zhu suggested the social media platform report to the regulatory authorities and should avoid making such content a trending topic.