BUSINESS IKEA's experience in China may help it grow in India

IKEA's experience in China may help it grow in India 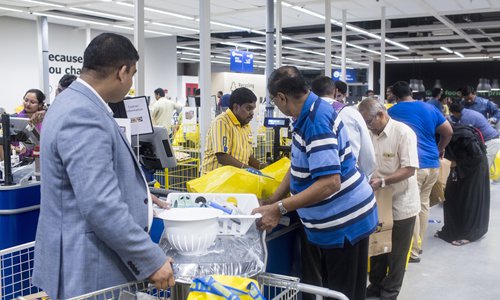 Customers purchase products at check-out counters inside the IKEA store on the outskirts of Hyderabad, India, on August 9, 2018. (Photo: VCG)

Hundreds upon thousands of people in Hyderabad, capital of southern India's Telangana state, rushed into a brand-new IKEA store on its opening day on August 9, causing hours-long traffic jams in the city's bustling IT hub.

It is the first store that IKEA has established in India, which came after years of market delay.

Staff members of the Swedish furniture retailer, in their iconic yellow uniforms, welcomed a swarm of customers at the store's entrance, holding both Swedish and Indian flags. The stampede-like situation even went viral on social media.

Samarth Shah, a 28-year-old technology consultant, said he found out about the store's opening on Facebook, reiterating that it even created traffic jams. While visiting Hyderabad for a business trip, Shah went to the store in his spare time and spent two-and-a-half hours there.

"I believe [IKEA] is more about providing a personal experience, which I don't see in other furniture stores in India. In addition, IKEA is more tech-savvy," he told the Global Times.

Over the past few years, IKEA has been studying the Indian market from both a legal and a consumer perspective. After its rapid expansion in China, the Swedish company has now tapped into Asia's third-largest economy to meet the demands of India's growing middle class.

India has tremendous potential as a country with the right socioeconomic preconditions, the company noted in a statement sent to the Global Times. "[India's] economy is growing rapidly. There is huge urbanization where more people are moving into the cities," it said.

The world at large has recently been witnessing the most rapid middle class expansion in history, whereby 380 million are expected to climb the ladder in India and 350 million in China between 2015 and 2022, US research group Brookings said in a report released in February 2017.

By 2020, India will be the country with the third-largest middle class consumption rate worldwide, with $3.7 trillion in annual spending that will contribute 9 percent to the global share, the report forecast.

In India, nuclear families are also becoming more common, while the population is getting younger, where more than 50 percent of its people are below 30 years of age, IKEA noted.

"I think [IKEA has a] large range of products for all people to choose from. It's one place where you can get all you need for a beautiful home," Harish Muniganti, a Hyderabad resident, told the Global Times via WeChat.

Also, the food options in its cafeteria make the store unique, he noted.

Although the 38-year-old engineer said he had not visited the store in India yet, he has plans to visit it in the next few weeks. "As far as I know, IKEA is known for its unique products, which are economic yet stylish," he said.

Before opening the store in the city, the Swedish multinational said it visited more than 1,000 homes in cities including Hyderabad itself, Mumbai, Bengaluru and New Delhi to understand the needs and aspirations of Indian families. Also, IKEA acquired four land sites in its priority markets - Telangana, Maharashtra, Karnataka and Delhi/National Capital Region - and is continuing to look for suitable sites in other cities, the company said.

The hugely popular furniture business has been successful in China because of the local real estate boom, seen as a major driving force, noted Tian Guangqiang, assistant research fellow with the National Institute of International Strategy at the Chinese Academy of Social Sciences.

"However, the housing market in China has been cooling down recently, which might have prompted the company to find new territory," he said.

IKEA has seen its revenue growth in China slow down recently, and it plans to scale down the size of brick-and-mortar stores while still enhancing the offline shopping experience in the 2019 fiscal year, domestic news site qq.com reported on Thursday.

Meanwhile, the company reportedly will lower delivery costs for certain products and boost its e-commerce business in China.

But, India's rising middle class does not necessarily guarantee IKEA's success in the country, Tian noted.

"Most of the population still belongs to low-income groups, which will limit the overall purchasing power," he said.

"Like IKEA's product portfolio strategy in China, and even in the US for that matter, offering products that are customized to local preferences, needs, household sizes and structures is key for IKEA's success in India," Sowmya Adiraju, home and garden research analyst at Euromonitor International's Bangalore office, told the Global Times.

Also, the company is expected to adjust its store location strategy in India, like it recently did in the Chinese market, and to expand its retail consumer reach by deviating from its big box retail format through introducing small format stores there, he noted.

"A 'one-size-fits-all approach' would not necessarily guarantee success, and understanding the local market and consumers is key," Adiraju said.

While some Indian customers have shown enthusiasm for the newly opened IKEA store, some have expressed concerns over the idea of DIY - do it yourself.

Shah, who spent most of his time in IKEA's sample houses during his first visit to the store, said the concept adds more personal touches to the shopping experience. "I think more Indians will buy [IKEA products now] but I'm not sure about the assembly part," he said.

Similar to Chinese people, Indians are not quite used to the idea of DIY yet and it is currently limited to a small segment of the population that is comprised of hobbyists, Adiraju noted. "It is important to cater to consumers' needs [when it comes] to product delivery, assembly and after sales support."