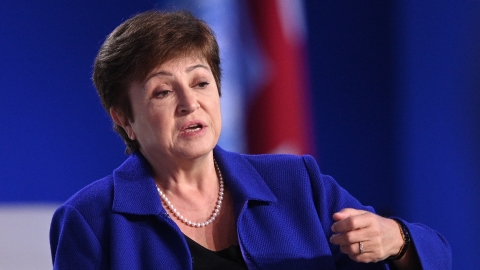 China's growth "remains in positive territory," IMF Managing Director Kristalina Georgieva told a virtual press conference during the 2022 Spring Meetings of the IMF and the World Bank, adding that China's growth has been downgraded mostly due to interruptions caused by COVID-19 lockdowns.

In its latest World Economic Outlook (WEO) report released Tuesday, the IMF slashed global growth forecast for 2022 by 0.8 percentage points to 3.6 percent amid the Russia-Ukraine conflict.

The Chinese economy, meanwhile, is expected to grow 4.4 percent this year, 0.4 percentage points lower than the previous projection, followed by a 5.1-percent growth in 2023, the report showed.

According to data released by China's National Bureau of Statistics on Monday, the country's GDP grew 4.8 percent year on year in the first quarter, marking a steady start in 2022 in the face of global challenges and a resurgence of COVID-19 cases.

"We see China capable of boosting the economy, because it has ample policy space," Georgieva told Xinhua during the press conference.

"We have seen in the last days, the People's Bank of China taking action to ease conditions for access to credit," she said. "And it also has space in terms of fiscal policy."

During the press conference, Georgieva also said the Russia-Ukraine conflict has led to a massive setback for the global economy, with the latest WEO downgrading growth forecast for 143 countries.

Developments surrounding the Ukraine crisis have contributed to rising consumer prices in many parts of the world, and caused disruptions to global supply chains of various commodities.

"There is one more hanging over our heads, the risk of geopolitical fragmentation, which could jeopardize the development gains of the last 75 years," she said, adding that it also leaves countries unable to deal with the current crisis and to address other urgent global challenges such as climate change.

Looking back, the IMF chief noted that there are "tremendous" benefits of cooperation and an integrated global economy, with global GDP tripling since 1990 and poverty shrinking from 2 billion to 650 million.

"If we want to protect the gains of cooperation, we have to make sure that these gains are visible," Georgieva said, urging policymakers to correct "shortcomings" in globalization from the past, including uneven distribution of the benefits of growth.