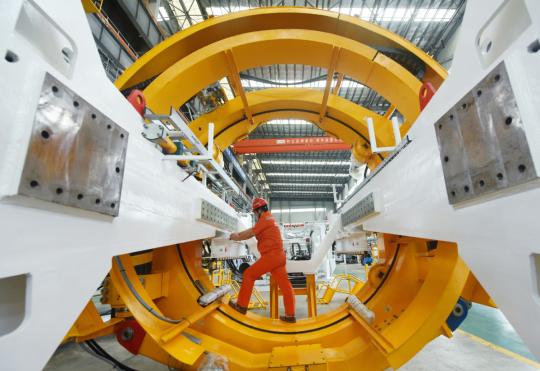 An employee works at a plant in Xiaoshan district of Hangzhou, Zhejiang province, on June 27. (Photo/Xinhua)

The International Monetary Fund has forecasted China's economy to grow at 3.2 percent in 2022, then rise by 4.4 percent for the next two years as the country's growth remains under pressure following an "impressive" recovery from the pandemic's initial impact.

The preliminary findings were released by the IMF on Tuesday, after a team led by its Mission Chief for China Sonali Jain-Chandra conducted "constructive" discussions virtually with senior Chinese government and banking officials, private business executives, and academics during an Article IV Consultation from Nov 2-16.

The consultation is based on Article IV of the IMF's Articles of Agreement. It usually involves bilateral discussions between the IMF and a member to assess the latter's economic health and financial risks.

"Under the zero-COVID strategy, China weathered the initial impact of the pandemic well, allowing the economy to recover swiftly from the early-2020 lockdowns and to expand the global supply of medical goods and durable goods significantly at a critical time for the global economy," said Gita Gopinath, IMF's first deputy managing director.

"However, China's growth has since slowed and remains under pressure amid recurring COVID outbreaks, deep challenges in the property sector and slowing global demand," she said in a statement at the end of the virtual visit.

Gopinath, who also held virtual meetings with several senior policy officials, said the zero-COVID strategy in China has become "nimbler" over time. However, the combination of more contagious COVID variants and persistent gaps in vaccinations have led to more frequent lockdowns, weighing on consumption and private investment, including in housing.

The regulatory tightening in the property sector, while well intended to rein in high leverage, has added to severe financial strains for developers, leading to a rapid slowdown in housing sales and investment, along with a sharp decline in local government land-sale revenues, the statement said.

"Against this backdrop, growth is projected at 3.2 percent for 2022, increasing to 4.4 percent in 2023 and 2024, under the assumption that the current zero-COVID strategy will be gradually and safely lifted in the second half of 2023," she said.

In its World Economic Outlook released earlier last month, the IMF forecasts China's overall growth domestic product growth will align with the global projected pace in 2022, but growth is 1.7 percentage points higher than the projected global average in 2023.

China also faces external headwinds from a global slowdown, a further rise in energy prices and more tightening in global financial conditions, according to the IMF statement.

It said that, in the longer term, rising geopolitical tensions pose risks of fragmentation through financial decoupling pressures and limits to trade, foreign direct investment and knowledge-exchange around technology.

China's GDP expanded by 3 percent year-on-year in the first three quarters, compared with 2.5 percent in the first half of the year, according to the National Bureau of Statistics data, which indicated that the economy has shown resilience despite some downside risks.

Between January and September, China logged 3.9 percent year-on-year GDP growth, compared with 0.4 percent growth in the second quarter, as showed by the data.

"Going forward, a further recalibration of the COVID strategy should be well prepared and include boosting the pace of vaccinations and maintaining it at a high level to ensure that protection is preserved," the IMF statement noted.

The IMF also said China, together with other countries, can play a leading role in multilateral efforts to address global challenges amid the increasing threat of geo-economic fragmentation and rising levels of debt distress among several low-income countries and some emerging markets.

It said China would benefit not only from reaching new agreements in areas like e-commerce and investment facilitation, but also from strengthening the rules-based international trade system.

"The establishment, with China's support, of the G20 Common Framework to support debt resolution for low-income countries was a welcome and important step. The priority now is to make this process for providing relief faster and more predictable," it said in the statement.