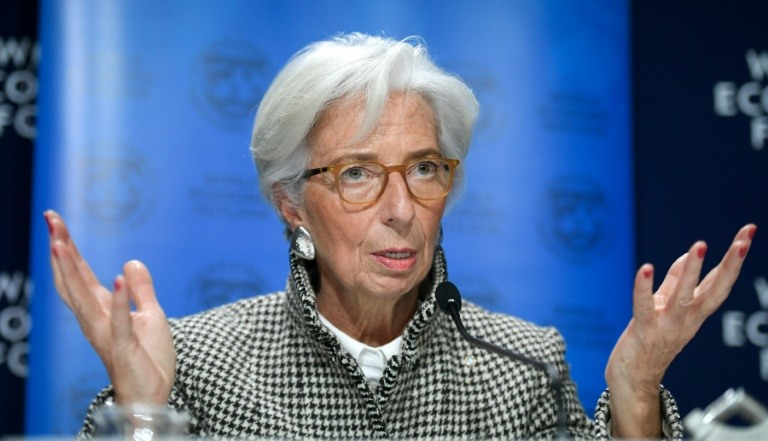 Global economies are recovering simultaneously and at a stronger pace, and will get at least a short-term boost from the US tax cuts, the International Monetary Fund said Monday.

In the latest update to the IMF's World Economic Outlook, nearly all the forecasts for 2018 and 2019 were revised upward compared to the October edition.

However, the fund warns that exuberant financial markets could be due for a reversal.

The global economy is now expected to grow 3.9 percent this year and next, two-tenths higher than the previous estimate, and up from 3.7 percent in 2017.

Advanced economies are seeing solid simultaneous growth, and the US tax reform passed just before Christmas will have a measurable effect, at least for a couple of years.

"The revision reflects increased global growth momentum and the expected impact of the recently approved US tax policy changes," the IMF said.

"Some 120 economies, accounting for three quarters of world GDP, have seen a pickup in growth in year-on-year terms in 2017, the broadest synchronized global growth upsurge since 2010."

The WEO upgraded the US GDP forecast by a surprising four-tenths of a point this year to 2.7 percent, compared to the expected 2.3 percent in 2017.

And for 2019, the IMF increased its US growth forecast a whopping 0.6 points from October to 2.5 percent.

The corporate tax cuts are seen driving investment, which could add growth of 1.2 percent to the US economy through 2020, while also contributing to the faster expansion in US trading partners like Mexico.

Mexico's economy is now expected to expand by 2.3 percent in 2018, 0.4 points better than the prior forecast, while 2019 got a stunning upward revision of 0.7 points to 3.0 percent, according to the WEO.

However, the US tax reform will lower growth from 2022 onwards "due to the temporary nature of some of its provisions," the report warned.

The euro area also will see growth accelerating, improving in nearly all member states, especially Germany, which saw its GDP forecasts upgraded by a half point this year and next to 2.3 percent and 2.0 percent, respectively.

Spain, with the hit from the independence movement in Catalonia, was a rare exception, seeing a one-tenth downgrade in the 2018 forecast to 2.4 percent.

The UK economy, facing separation from the European Union, was also one of the very few that did not see an upward revision. The 2018 forecast was unchanged at 1.5 percent.

Japan saw a rare and large upgrade of five-tenths for this year to 1.2 percent.

The IMF said even though the economic "rebound could prove stronger in the near term," the risks to the global forecast remain tilted to the downside.

As major stock markets worldwide have been on the upswing, with repeated records set on Wall Street, the report warned that "rich asset valuations... raise the possibility of a financial market correction, which could dampen growth and confidence."

Ironically, the stronger growth could provide the seeds of a possible reversal if it triggers faster-than-expected inflation in advanced economies, and a quicker increase in interest rates.

And the absence of worries in the near term could prompt financial market players to look for riskier and more profitable investments "and amplify the buildup of financial vulnerabilities," the IMF warned.

As it has done regularly, the fund urged member countries to take advantage of the good times to make necessary reforms and investments to boost potential growth.

"The current cyclical upswing provides a unique opportunity for structural and governance reforms," the IMF said, adding, "policymakers should guard against the temptation to defer reforms and budgetary adjustments for later."