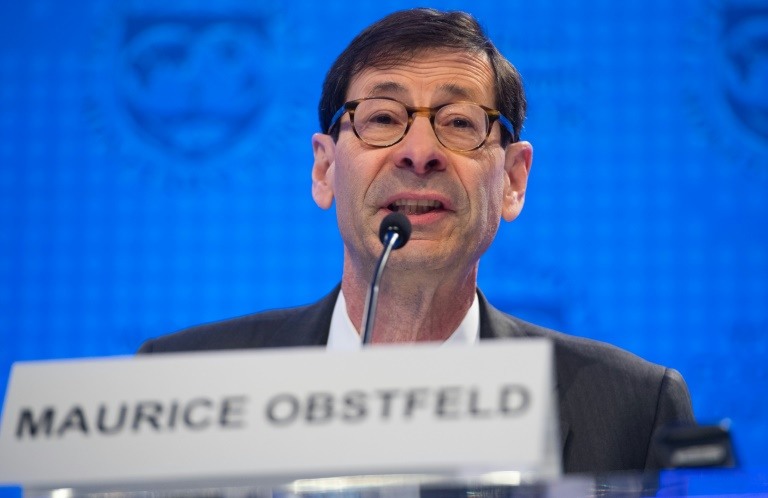 Maurice Obstfeld, Economic Counsellor and Director of the Research Department at the IMF, holds a press briefing on the World Economic Outlook (Photo: AFP)

The global economy is expected to grow at a solid pace through next year, boosted by faster expansion in the United States and Europe, but after that risks will build, the International Monetary Fund said Tuesday.

In the latest update to its World Economic Outlook, the IMF still predicts world growth of 3.9 percent in 2018 and 2019, unchanged from January despite raised estimates for US and EU growth.

That is an improvement on the 3.8 percent global growth seen last year.

However, the Fund cautions that the growth "momentum is not assured," given trade tensions between the United States and China and the expected reversal of the positive effects from the US tax cuts.

IMF Chief Economist Maurice Obstfeld stressed that the trade conflict could damage the global economy if it broadens to affect other countries, and said even the prospect of a trade war could do harm.

"There's not going to be any winners coming out of a trade war," he told reporters, noting that the uncertainty alone could put a damper on investment.

While it is difficult to predict how things will play out, "I suspect if you keep poking at economic expansion it could turn around and bite you," Obstfeld warned.

The report notes that the sweeping US tax cuts approved in December will fuel higher growth only through next year, and after that will "subtract momentum."

The IMF raised its US forecast by two tenths for both years, to 2.9 percent for 2018 and 2.7 percent for 2019, which follows big upward revisions in the October report, due to the tax impact.

However, Obstfeld warned the stimulus was "largely temporary."

And because the US boost accounts for most of the higher world expansion, beyond 2019 "global growth is projected to gradually decline to 3.7 percent by the end of the forecast horizon," the report said.

- Risks to the downside -

The risks to the global economic outlook "clearly lean to the downside" beyond the next few quarters, the IMF warns.

Like other advanced economies, the United States will max out growth and return to a more sluggish pace, "held back by aging populations and lackluster productivity."

And despite the fact increasing world trade helped boost growth in recent years, there has been a rise in public skepticism about the benefits, leading to a renegotiation of trade deals and increasing friction.

US President Donald Trump last month imposed steep tariffs on steel and aluminum imports and threatened to impose more on tens of billions of Chinese goods, prompting Beijing to slap duties on US goods like pork and sorghum and threaten even more sensitive US exports like soy.

"That major economies are flirting with trade war at a time of widespread economic expansion may seem paradoxical -- especially when the expansion is so reliant on investment and trade," Obstfeld said.

"Our strong message at this meeting is there is a multilateral system. Let's use it and proceed in a collaborative way rather than conflictive way."

IMF chief Christine Lagarde last week warned governments to "steer clear of protectionism in all its forms," saying the trade frictions hurt poor consumers the most as costs increase, and that they also undermined a system that had broadened prosperity worldwide.

Instead, the IMF argues that the United States and others should respond to anxiety about globalization and technological advances by "strengthening growth, spreading its benefits more widely, (and) broadening economic opportunity through investments in people," Obstfeld said.

Rather than lower the trade deficit, as Trump has called for, the US trade actions could expand it by another $150 billion by 2019, according to the report.

And the Fund warns that a worsening of trade conflict could have broader implications for global growth as well as market confidence.

The report cites the market turbulence in early February and into March amid the growing US-China trade dispute, when US stocks stumbled after surging to repeat records in the first weeks of 2018. The Dow had lost almost 10 percent of its value by the end of March, down from the record 26,616.71 reached on January 26.

The rapid decline should "serve as a cautionary reminder that asset prices can correct rapidly and trigger potentially disruptive portfolio adjustments."

In other projections, the IMF upgraded the forecast for the euro area to 2.4 percent for 2018, an upward revision of two tenths compared to the January estimate, as it raised its estimates for key members, especially Spain. But the forecast for 2019 was unchanged at 2.0 percent.

Japan's growth is still seen at a sluggish 1.2 percent this year, after a rare and large upgrade of five tenths in January, slowing to 0.9 percent in 2019.

The forecasts for China and India, key drivers of global growth, were unchanged from January. China is expected to expand 6.6 percent and 6.4 percent this year and next, while India should grow 7.4 percent and 7.8 percent.