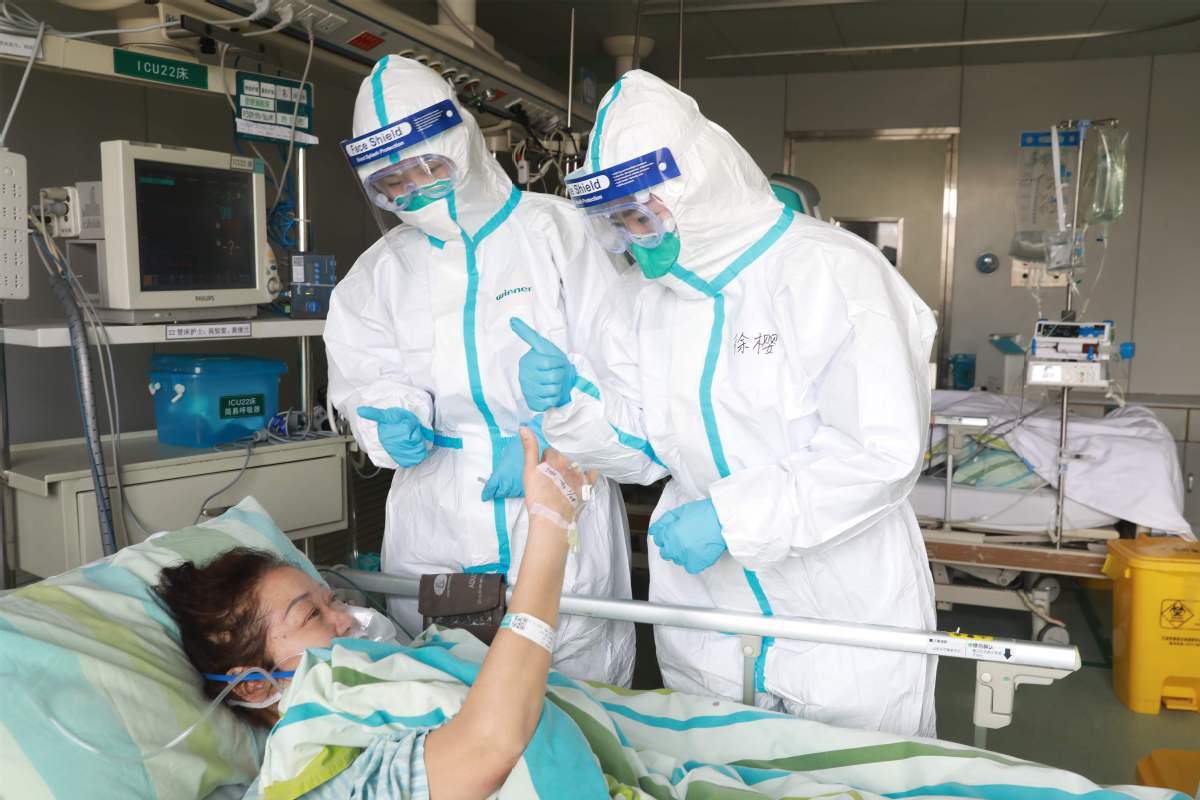 A recovered pneumonia patient gives a thumb-up to medical workers at an isolation ward in Zhongnan Hospital of Wuhan University in Wuhan on Jan 30, 2020. (Photo by Gao Xiang/For China Daily)

The International Monetary Fund said it is difficult to quantify the impact of the new coronavirus outbreak on the Chinese economy at the moment, but it expects the effects could be temporary and be reversed once the virus retreats.

"The economic impact will depend very much on the behavior of the illness itself, the virus, how fast it spreads, who it affects and how quickly the contagion will run its course," Gerry Rice, director of IMF's Communications Department, said at a briefing on Thursday.

US President Donald Trump, in a speech at an auto parts manufacturer in Warren, Michigan, on Thursday said he believed the virus was "under control".

"We're working very closely with (China) and with a lot of other people and a lot of other countries," he said. "We think we have it very well under control. We have very little problem in this country at this moment."

Rice noted that the direct economic impact of the virus would be mostly on demand, as people have stayed home in China. What is usually a busy retail and tourism season (Lunar New Year) has essentially come to a halt. On the supply side, there have been production stoppages, transport delays and workers staying home.

Indirectly, the outbreak is having an impact on confidence and creating uncertainty, For example, Chinese financial markets remain closed for the Chinese New Year holiday, he said.

"Now all of that said, we would also expect that much of these effects could be temporary and be reversed once the virus retreats," Rice said. "As roads and airports open up again, people go back to work, and firms make up for lost business."

If the virus retreats quickly, the impact likely will be small, similar to the 2003 SARS (severe acute respiratory syndrome) episode. Most experts agree that annual growth took a relatively small hit during the SARS outbreak because it was contained, according to Rice.

"If it's a small impact on China, the relative impact on the rest of the global economy would be smaller," he said.

But Rice noted that Asia would likely be most affected, as there will be a reduction in the number of Chinese people traveling aboard along with a slowdown in imports and domestic economic activity.

"Again, there is a risk that these spillovers could be larger and reach further. We just don't know at this point," he said. "We at the IMF are monitoring this very closely."

At a teleconference organized by the council on Wednesday, Yanzhong Huang, senior fellow for Global Health of the Council on Foreign Relations, said "it's still too early to quantify the potential impact".

Huang said that there is much "we still need to know — the case fatality rate, for example, of the virus".

Scott Kennedy, senior adviser and trustee chair in Chinese business and economics at the Center for Strategic and International Studies, said that much of the potential impact of the virus depends on whether it is contained or if it turns into a pandemic.

"But at a minimum, there will be a substantial hit to China's 2020 growth prospects," Kennedy said.

In Geneva on Thursday, the World Health Organization declared the outbreak a global emergency. But WHO chief Tedros Adhanom Ghebreyesus stressed that the UN agency disfavors or even opposes imposing travel or trade restrictions on China.

Tedros tweeted a day before that the Chinese people are suffering the most from the virus outbreak. "Their lives and economy are bearing the brunt of the outbreak as they make sacrifices to contain it. China needs the world's solidarity and support."

In another development, US Secretary of Commerce Wilbur Ross suggested Thursday that the coronavirus outbreak in China might turn out to boost jobs in the United States.

"I think it will help to accelerate the return of jobs to North America, some to US, probably some to Mexico as well,'' Ross told Fox Business Network, though he also emphasized that he didn't "want to talk about a victory lap over a very unfortunate, very malignant disease'.'

"To suggest that there are potential economic benefits for the US as a consequence of this terrible outbreak does seem beyond the pale," Prasad was quoted by The Wall Street Journal as saying.

Angela Rasmussen, a virologist at Columbia University, tweeted, "If anyone needs an example of the insidious racism that is becoming more and more ingrained in the public discussion of #nCoV2019, look no further than this repulsive statement from @SecretaryRoss of the US Dept of Commerce."