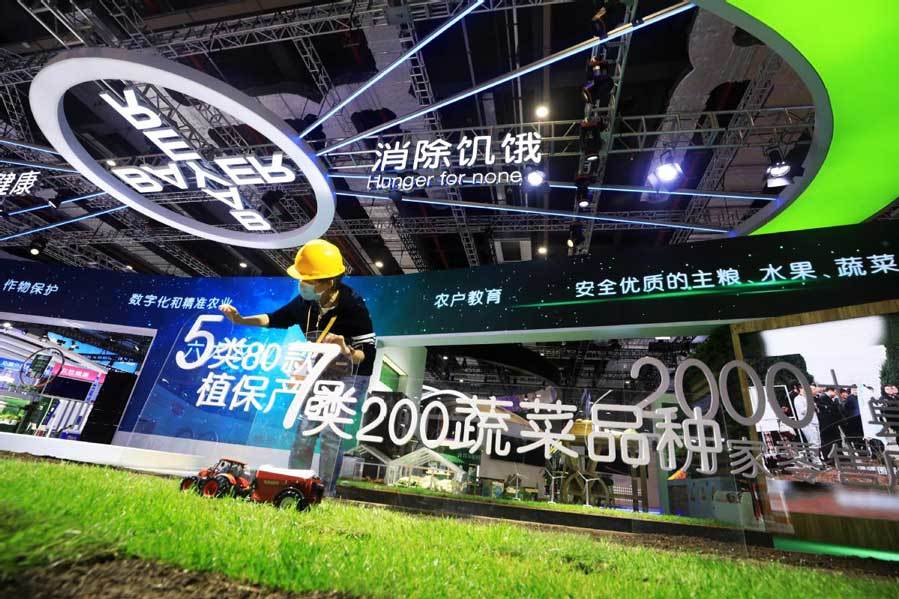 A worker checks an exhibition booth at the third China International Import Expo in Shanghai on Monday. The expo will be held from Wednesday to Tuesday. (Photo: China News Service)

Officials, experts, business chambers and corporate leaders from around the world have expressed their confidence in China's role in helping to offset global economic downward pressure as the country demonstrates its clear commitment to opening-up with its hosting of a series of landmark trade events.

The highlight of this recent activity is the third China International Import Expo, at which President Xi Jinping will deliver the keynote speech via video at its opening on Wednesday.

Analysts anticipated that the president, in his speech, is likely to send more signals about China's future dedication to opening-up and promoting global trade.

First held in 2018, the expo has seen its organizer and exhibitors overcome a number of challenges this year, especially those due to the ongoing COVID-19 pandemic and strong economic headwinds.

The International Monetary Fund, in a report published last month, projected a global contraction of 4.4 percent and a return to growth of 5.2 percent in 2021.

The exhibition area of this year's expo has increased by nearly 30,000 square meters to 360,000 sq m, and the number of clients so far has surpassed that in previous years, according the expo's organizer.

The expo demonstrates China's firm commitment to actively opening its market to the world, and it "proves that China is always committed to promoting international trade and multilateralism despite the COVID-19 pandemic", said Seang Thay, a spokesman for the Cambodian Ministry of Commerce.

The event is being held just a few days after policymakers unveiled a fresh vision for China's future growth, economic buildup and opening-up for the upcoming five and 15-year periods.

China will take new steps in reform and opening-up in the next five years and complete in general the building of a high-standard market system, said a communique released on Thursday after the Fifth Plenary Session of the 19th Central Committee of the Communist Party of China.

Media and analysts pointed out that the communique mentioned the phrase "opening-up" 11 times.

The new institutions of an open economy at a higher level will take shape, the country's opening-up will advance in greater scope, range and depth, and it will leverage the advantages of its huge market to promote international cooperation and achieve win-win results, the communique said.

Also, China will further push for liberalizing and facilitating trade and investment, advance the innovative development of trade, seek quality growth in joint building of the Belt and Road and take part in reforming global economic governance, the communique added.

Xu Xiujun, a leading researcher at the Chinese Academy of Social Sciences' Institute of World Economics and Politics, said "seeking quality opening-up and breaking new ground for win-win collaboration are indispensable" as China works to shape a new development pattern during the 14th Five-Year Plan (2021-25).

The country is faced with such demanding tasks as advancing reforms in key sectors and meeting the ever-increasing need of the public for better lives, while the world economy is suffering tremendous blows from the pandemic, Xu said.

"A great variety of risks are amassing and emerging, and the economic engine for long-term growth is losing steam," he said.

"In the global context of growing anti-globalization challenges, China is pressing ahead with opening-up by following the goals it marked, the pathway it charted and the tempo it set. This is adequate proof of China's courage and confidence as a major developing country in embracing the world and advancing domestic development while remaining open to the outside world," Xu said.

Zeng Zheng, a senior researcher at the National Development and Reform Commission, said that China must expand its imports to better adapt to the need for upgrading production and optimizing the structure of domestic consumption as it seeks quality opening-up.

China should "proactively widen and promote ways it imports and shapes the CIIE as a cooperation venue with great openness at which countries could show the progress in their development and embark on international trade", Zeng wrote in an article published by Guangming Daily on Tuesday.

Besides, the country should further facilitate imports of commodities that matter to daily life, fulfill measures to reduce tariffs for applicable goods and perfect its duty-free retail policy, Zeng added.

In a welcome move on imports, some products for exhibition at the CIIE this year will be exempted from import tariffs and import value-added tax.

Consumption tax will be waived on the sale of applicable products, including machinery, medical equipment and artwork.

Meanwhile, many foreign exhibitors and business chambers are reporting an unprecedented level of interest around the world in this year's expo.

The Australian Trade and Investment Commission said the number of Australian exhibitors attending the expo is up 20 percent compared with last year.

Around 200 Australian companies will participate in the expo, from the food, agricultural products, medical devices, services trade and technology sector, the commission said.

The British government said that over 100 brands from the food, drink and innovation sectors will be featured at Britain's 300-square-meter pavilion at the CIIE this year.

"As we forge new relationships with countries across the world after leaving the EU, we want to increase our business with one of the world's fastest growing economies," he added.

Chen Fengying, a senior world economy researcher at the China Institutes of Contemporary International Relations, said China would not have achieved such remarkable growth if it were not for adopting the reform and opening-up.

"Opening-up, as it were, is a 'trademark' of China's development," Chen said, adding that the country has contributed to the world throughout its engagement with the entire world.

Somdet Susomboon, director-general of the Department of International Trade Promotion of the Thai Ministry of Commerce, said the CIIE provides a huge platform to showcase high-quality products from countries across the world, which will create opportunities for the participating Thai small and medium-sized enterprises to explore the Chinese market and help Thailand's economic recovery.

"Chinese consumers have a strong purchasing power. They buy varieties of Thai goods yearly, particularly Thai fruits, which are of quality and safety and taste good," he told Xinhua News Agency.