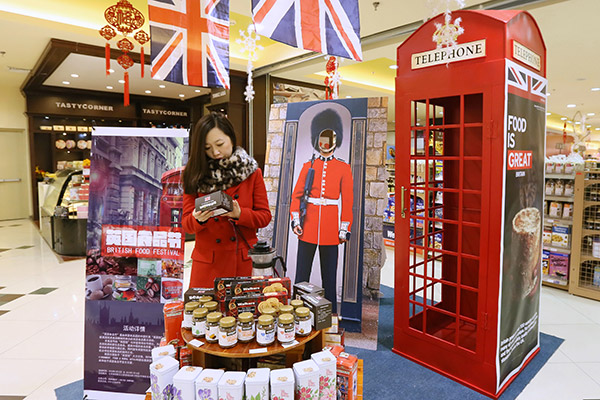 A woman examines food imported from the United Kingdom at a supermarket in Beijing. [Photo/China Daily]

BEIJING - Chinese consumers' demand for imported food has been growing steadily as the standard of living in China improves, according to a statement from the General Administration of Customs.

China's total food imports amounted to $58.28 billion last year, up 25 percent year-on-year, while the annual average growth rate over the previous five years was 5.7 percent, data from the administration showed.

The European Union remained China's largest supplier of food, followed by the United States, New Zealand, Indonesia and Canada. Meat, oil, dairy, and seafood were among the most popular food imports in China.

Chen Weinian, purchasing director at Shanghai's City Shop, said that foreign food used to be consumed mainly by foreign expatriates and are now being favored by a lot more Chinese.

A separate report from the National Development and Reform Commission showed that the country's Engel's coefficient dropped to 29.3 percent in 2017, below the benchmark of 30 percent for the first time set by the Food and Agricultural Organization of the United Nations and falling into the range for a wealthy life.

Although the proportion of income spent on food fell, Chinese people have become increasingly picky about their food consumption and want diversity and exotic tastes more.

For instance, over the past few years, China has been increasing its fruit imports from Latin America. The country's avocado imports from Mexico, Chile, and Peru in 2017 alone reached 30,000 metric tons.

China announced a series of measures to reduce tariffs and expand imports at the 2018 Boao Forum For Asia Annual Conference, including a 55.9 percent average decline of the MFN rates for various sectors, including food and beverages.

In addition, with the development of cross-border e-commerce and custom transportation, buying imported food is becoming more convenient and efficient.

The growth rates of imports and exports in these pilot zones remained above 100 percent in the past two years.

Platforms for cross-border e-commerce are also thriving. As of May, over 400 third-party platforms and 20,000 transnational e-commerce enterprises had been newly established in the first 13 pilot zones.

Cainiao, a cross-border e-commerce network of Alibaba, has built 110 global warehouses and 74 cross-border logistic lines and offers services in 224 countries and regions.

As a crucial part of food importation, Chinese customs have been striving to accelerate transportation and strengthen surveillance to ensure the quality and freshness of imported food.

"We have opened 'green channels' for imported food and simplified the import procedures for food products to limit the process from arrival to release to just one hour," said Zhang Xin, vice chief of Zhengzhou customs in Henan.

Zhang added that in the first half of the year, they had reduced the average time for an imported product to go through customs to 6.69 hours, down 45.8 percent year-on-year.

The administration further bolstered the regulation of imported food and facilitated the cooperation with its international counterparts to ensure food safety, according to its report released in July.

In 2017, a total of 49,000 tons of substandard imported food products from 94 countries and regions were seized by China's customs, according to the administration.

The administration also makes regular reports on the quality and safety of imported food to promote the communication and mutual understanding between the government, enterprises, and consumers.