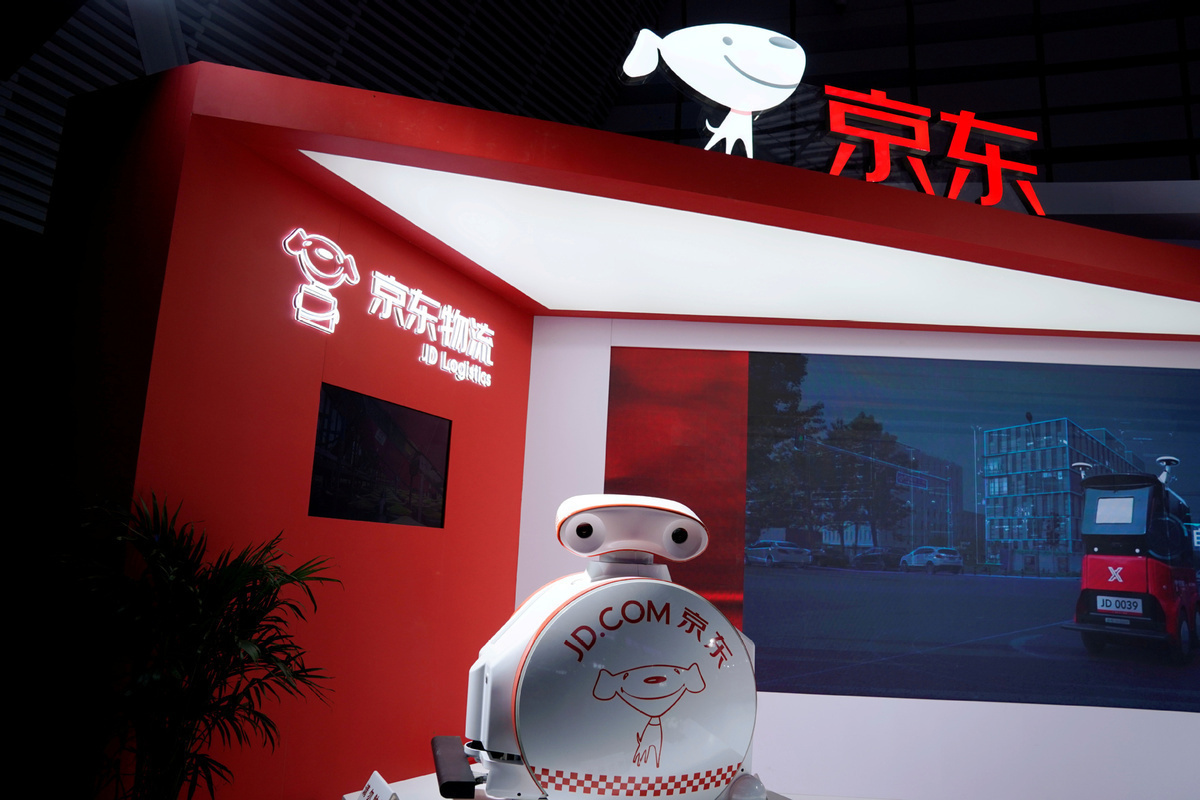 A JD sign is seen at the World Internet Conference in Wuzhen, Zhejiang province on Oct 20, 2019. [Photo/Agencies]

The consumption growth of imported products from lower-tier cities is higher than that from first-and second-tier cities. Last year, Guangdong, Henan, Hainan, Fujian and Gansu provinces saw the fastest growth in the number of consumers purchasing overseas goods on JD's online marketplaces, the report stated.

The report also noted that beauty and makeup, healthcare and maternal and baby products are the top three best-selling categories of imported products, and consumers prefer to buy overseas products from the United States, Japan, France, Germany and Switzerland on JD.

The proportion of female consumers who purchase imported merchandise is higher than that of male consumers. And the young generation aged below 30 is the fastest-growing consumer group for imported products.

In addition, imported products are gaining traction among consumers during this year's Singles Day shopping carnival. In the first 10 minutes of the promotion, the transaction volume of JD Worldwide Import Supermarket was 39 times that of last year. The turnover of Italian luxury brand Tod's in the first minute of the promotion exceeded that of the entire day last year, according to JD.

Data from the General Administration of Customs showed the import and export volume of China's cross-border e-commerce reached 886.7 billion yuan ($138.6 billion) in the first half of this year, up nearly 29 percent year-on-year.

"With the expanding domestic demand and advances in emerging retail technologies, China has introduced preferential policies, such as lowering import taxes and expanding the range of goods allowed to be imported. All of this has prompted a surge in cross-border e-commerce imports despite the COVID-19 pandemic, underlining a period of rapid growth for China's imported goods market," said Zhang Tianbing, head of Deloitte Asia-Pacific consumer products and retail industry.

Zhang said the pandemic has had a profound impact on Chinese consumer attitudes and buying patterns. "The boom in celebrity livestreaming has spurred cross-border e-commerce purchases by domestic consumers. Moreover, overseas brands are moving to cross-border e-commerce platforms as they expand their distribution channels in light of disruptions to offline retail," Zhang said.

Cross-border e-commerce has played a positive role in enriching domestic product supply, bolstering the development of new business models, and better meeting the needs of residents, said Mo Daiqing, a senior analyst at the Internet Economy Institute, a domestic consultancy.

Such services have gained wide popularity among the younger generation, Chen said, adding that there is an inevitable trend that more cross-border online retailers will cooperate with livestreaming platforms.